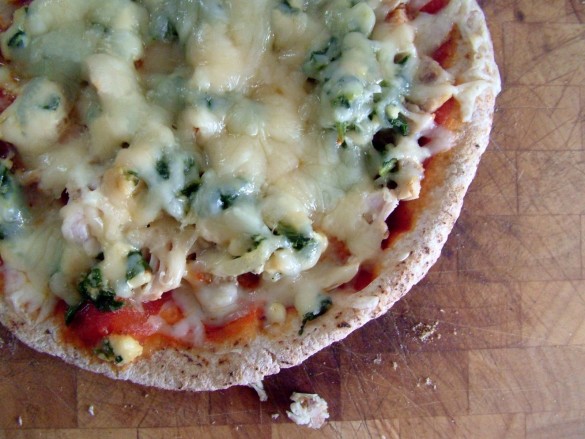 Good name, dontcha think? I haven’t heard it before. Which isn’t to say no one has thought of it before. How could they not have? I don’t think I’ll Google it though, lest I burst my proud bubble.

Again with the leftovers – I had some filling left from Monday’s event, at which I made spanakopita. Rather than do another omelet (although that would have been pretty divine) I sprinkled the mixture over tomato paste-spread whole wheat pitas and topped them with part-skim mozza, then baked them in the oven. It’s easy being cheesy.

Also, a batch of roasted chick peas with garlic and chard, because I had a bunch of chard and couldn’t think of a better use for it. It’s so intense – heavy-duty, garlicky, oily and fantastic – when I brought it to the table Mike groaned “oh yeah” – not quite like the Kool Aid guy, but more as if I had just set a Porterhouse in front of him. Yay me.

After making it close to ten times I have distilled the recipe somewhat – I roast the chick peas, garlic, oil and bay leaves (the last few times without onion), then take them out with a slotted spoon and saute the chopped chard in the uber-garlicky oil, then return the chick peas to the pan. No need for more garlic or chicken stock, really.