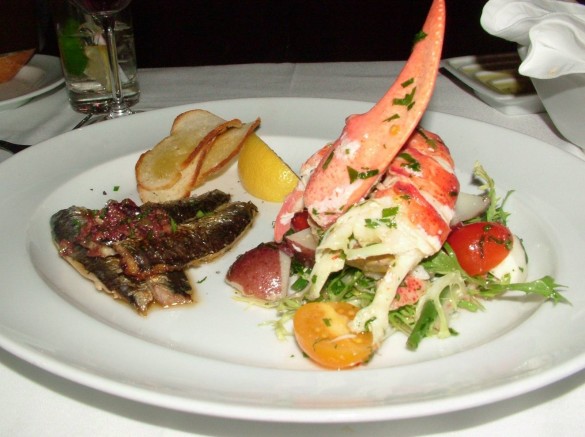 Maybe if this blog was called Breakfast with Julie (or Breakfast at Julie’s? like Tiffany’s?) I could write in the morning, when most of my synapses are still (more or less) firing, and rarely would it be after midnight, in my new pink fleece pajamas after a big meal and a glass of 10 year old tawny port.

Dinner tonight was at Ferreira – to be honest I didn’t much need dinner after drinking a cup (and the second half of Sue’s) of molten chocolate at Suite 88 chocolate lounge this afternoon just as it was getting dark. We found the chocolate recommendation on Chowhound and made our pilgrimage late in the day, finding it a little further away and a little more uphill than could be detected on the map. By the time we got there we were both cold and out of jam, which should have by all accounts intensified our chocolate eating pleasure. We bought one of each of the truffles for our efforts but only got through three – the only reaction any of them triggered was something along the lines of – meh. We packed up the rest to send home with Sue.

But the real hot chocolate. You know I’m a fan. This did not disappoint. It almost required an ambulance, but damn was it tasty; dark and intense but not too sweet nor bitter, with the smooth, velvety texture of a custard sauce. But chocolate. All I could think was: this must be what the chocolate river tasted like in Willie Wonka`s factory; this is exactly as I imagined it would taste as a kid, reading about Charlie scooping out a mugful of warm, frothy liquid. Lucky, lucky Charlie. After walking most of the way back to the hotel, I was still having heart palpitations and needed a lie down.

Dinner was more about diffusing all that chocolate and maximizing our Montreal eating time (We naively thought we could get into Au Pied du Cochon by calling for a reservation this afternoon. Not.) than it was about actual hunger. We ended up at Ferriera as a result of stumbling into Cafe Vasco da Gama for breakfast this morning and meeting the owner`s brother, George. (Whose brother owns both.) Every little thing at Cafe Vasco was outstanding. We wanted to hang out all day and watch the chefs slide oiled and herbed chunks of sweet potato in and out of the oven, and serve up marinated olives and grainy, beany salads. We shared a cheesy omelet with Spanish chorizo and fresh fruit, a bowl of fresh berries, a raspberry Danish and a wee Portuguese custard tart with cappuccino. 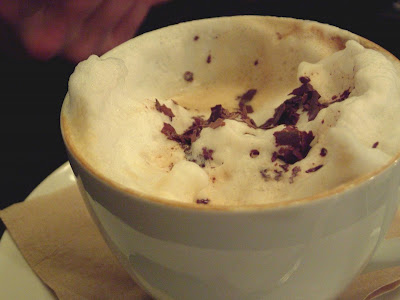 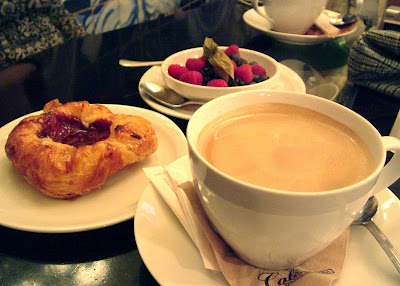 We would have happily eaten dinner there as well, but it was closed and besides, George had already tipped us off about his brother`s wonderful Portuguese restaurant, which was a few doors down. Really, our bread basket with olive oil and two entrées (a word used in its proper context here – referring to an appetizer, not a main course) would have sufficed. It’s unfortunate that you tend to order right away, when you’re hungry, rather than after having a few nibbles and coming to your senses, at which point we might have realized there was no need for a gigantic bowl of Bouillabaisse de poissons et fruits de mer en cataplana as well as Sue’s salted cod special. The highlight of the meal by far was the Salade gourmande de homard et foie gras au torchon (lobster and “foie gras au torchon” salad with a main sail claw of lobster meat, a melting slab of foie gras, baby potatoes, the slenderest green beans, grape tomatoes, frisee and some sort of magical vinaigrette); a close second were the “Fleur de sel” roasted sardines with olive tapenade. The bouillabaisse was quite fantastic too, although by then I wasn’t hungry anymore.

I didn’t find any suitably French cookies today either – I was hoping to stumble upon some delicate macaroon sandwiches, but we didn’t go into as many patisseries as planned. Tomorrow, in our mad rush to see as many old churches as possible before noon when we have to catch a cab to the airport. I have the recipe for Stroopwafels ready to type out, but for some reason my computer won`t upload the photo, and you really need a photo. (The internet connection is very weak, which must be what`s slowing this whole process down and why I can only upload a few photos.)

I`m sorry to once again pawn you off on another blog`s cookie, but these really are well worth discovering. In keeping with the French theme I direct you to Chocolate and Zucchini and her Squeeze Cookies (A Roasted Flour Experiment). Roasted flour is something I`ve been hearing quite a bit lately – the idea is that you toast your flour, much like you`d toast nuts or seeds or oatmeal to boost its flavour. I used to brown my flour in a skillet when making gravy to boost its colour; in this recipe cookies make use of roasted flour to give them a whole new dimension. Because roasting affects the gluten and thus the texture of your baking, these are sandy sables (which don`t rely on gluten for their texture) made with fleur de sel (another selling point). But the best part: wads of dough are squeezed in your hand and then baked like that. (Seriously, check out the photo.) This is about as anti-rolled-and-cut-and-decorated-with-royal-icing-and-fancy-dragees as you can get. Take that, Martha.