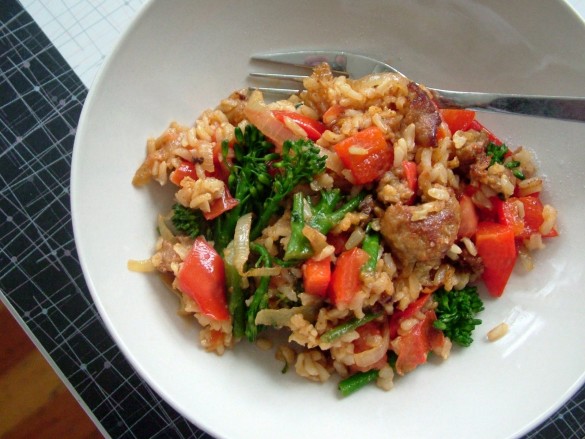 I did GO! today for CBC Radio, a live (to tape) radio variety show that will air nationally tomorrow morning, if you want to hear what I sound like (while trying not to think of the fact that 600,000 people would be listening) – it’s on at 10am in Calgary, not sure of schedules elsewhere in the country.

This afternoon we had rehearsal before the evening show, which we did live in front of a studio audience at the Engineered Air Theatre in the Epcor Centre for Performing Arts. All took place downtown, close enough to where we live but a slow go considering the winter storm that started to hit the city at rush hour. I had about 45 minutes to come home and collect myself and some things we needed for the show, then get back downtown. Mike started cooking a crumbled sausage and thinly sliced onion, and when it was cooked/caramelized I threw in some chopped red pepper, a cup or so of cooked brown rice, a chopped tomato, quickly blanched chopped broccolini (the original recipe called for rapini, or broccoli rabe, but the store in Edmonton only had broccolini) and a bit of Worcestershire and balsamic (only a teeny drizzle of each). The recipe was a bit of a rough interpretation of one I made in Edmonton (which was topped with crumbled goat cheese – forgot that part!) minus the canned tomatoes and chicken broth, which I felt made it a bit too saucy. Mike loved it. W picked out the rice and meat. I ate most of it in the car on the way back downtown. 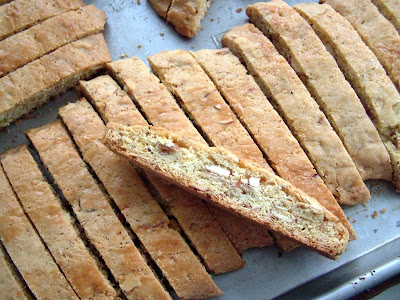 This morning, I made biscotti for an event tomorrow night (which may or may not happen, considering it’s in Red Deer). I got tired of the same old biscotti recipe and pulled one up on SmittenKitchen just to try something different. I happened upon her hole-in-one (as in Perfect on the First Try) biscotti, and she was right. I’m not really a fan of hard biscotti, I like it light and crispy without being crumbly, and this hits the mark. Likely on account of the 10 tablespoons of melted butter it calls for, but we’ll just ignore that fact for now. I did cut it back to 1/2 cup – not much of a trim job, but baby steps. Although this is a lovely and subtle blend of orange and almond, I imagine it would make a fantastic template for other biscotti varieties, or would be great drizzled with or dipped in chocolate. I thoroughly enjoyed mine dunked in my Tim Horton’s.