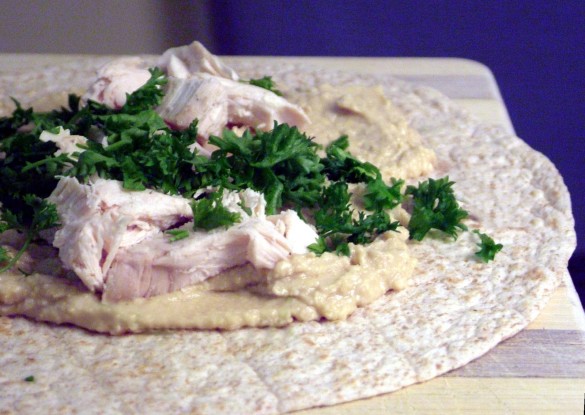 Still had some of that garlicky hummus from the weekend, whole wheat tortillas and fresh parsley; took some frozen shredded chicken from the freezer and had something made before I had time to nibble through enough to count as dinner. The motivation behind the mandarin milkshakes was mainly to reclaim a large chunk of prime real estate in my freezer that has been occupied for far too long. Besides, I had to put that vanilla ice cream out of its misery (if just to shut it up); likewise the last of the mandarin oranges that were getting too soft to be appealing. (Kind of like me.) I didn’t partake, but whizzed about 5 peeled mandarins with a few scoops of vanilla for Mike, Ben and W as they came back from playing at the park and ice skating. 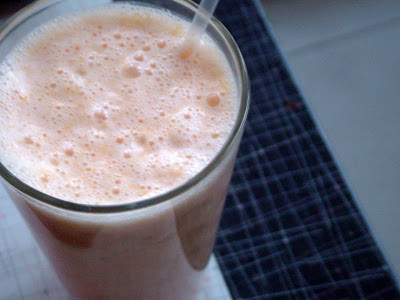 I buttoned the middle button of my pea coat today – comfortably, without fear of someone losing an eye by the sheer force of it popping off in the wrong direction. And I sat down in the car without even having to undo it, nor feeling particularly sausagelike. It’s funny the little things that make the most impact. When I was at my largest, I had a recurring dream about wearing jeans with front pockets; I fantasized about putting keys and change in my pockets, and when I lost all that weight, my biggest thrill was doing just that. And – get this – squatting. When the Oprah show called the first time (another story – and no I wasn’t on) they asked what I most wanted to do that I couldn’t before – fly in an airplane? Go bungee jumping? All I could think of was squatting down to pick things up and put them in my pockets. I don’t think that makes for particularly exciting TV.

I hope I’m not coming across as too preachy on the subject of weight loss; I don’t profess to know all there is to know on the subject, but only speak from my own experience – almost a lifetime of diet programs (the first time I joined Weight Watchers, with my Mom, I was around 10) before figuring out what worked for me. I have a hard time watching other people put their trust in unlikely methodologies, having been down that road so many times and knowing far too well how defeating it can be when things don’t work out the way you hoped.

Just remember this: the success rate for diet programs is 5%. And yet it’s a $50 billion industry in North America! If any other product on the market failed 95% of the time, how many repeat customers would it have? And yet the industry continues to thrive because when plans and products don’t work we don’t blame them, or lose faith in unrealistic promises; we blame ourselves. Our own shortcomings. If it didn’t work, we were just not doing it right. (Have you noticed the small print beside success stories for places like Jenny Craig? *results not typical. And have you noticed that Queen Latifah has quietly disappeared from her role as JC spokesperson since she signed on to endorse them a year ago?)

I have to look at my life as a whole, not broken down into stints of dieting or not dieting. Diets by nature are temporary, meaning that when it comes to an end the weight comes back, usually with interest. So here’s the thing: whatever you do to lose weight you have to be willing/able to continue to do indefinitely in order to keep it off. And you’re not going to give up cake for all eternity, are you?

This is how it is: most of the time I’m going to eat as well as I can, and some of the time I’m going to eat things that aren’t as good for me, or that might require an unreasonable number of hours on the elliptical trainer to burn off, and whatever it is is going to taste fantastic and I’m going to enjoy it because life is too short not to, and nothing ruins something delicious like a hefty serving of guilt. It’s what you do most of the time that matters. My mom once likened it to a freighter changing direction: you can’t undo all the good you’ve done by eating a lobster salad sandwich on a croissant, drinking some wine and taking a few dips in the chocolate fountain when you’re spending a weekend at the Chateau.

I decided a long time ago that I can’t approach life from a standpoint of damage control – worrying about how I’m going to “get through” parties and Christmas and holidays – all the events that strung together make for a happy life. But that’s what happens. You worry about how you’re going to handle it, plan to sip on tomato juice or nibble crudites or order the fish, then give in to the moment and eat a bigger piece of cake than you meant to or order a hot fudge sundae, then feel guilty for “cheating” or “ruining your diet” and have another piece of cake and finish the platter of butter tarts because you cheated anyway, and spend the rest of the day/weekend angry with yourself for it. Repeat. Promise yourself you’ll start tomorrow. Order pizza and make a batch of cookie dough to eat raw because you’re starting tomorrow so you might as well get it out of your system tonight.

(Or maybe that was just me.)

20 comments on “Roast Chicken and Hummus Wraps and Mandarin Milkshakes”