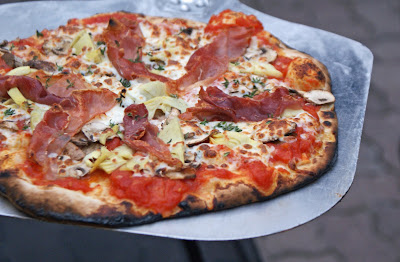 So after taking over traffic duties at CBC this afternoon, and a Save the CBC rally, I went to a salon. Not the mani-pedi type, the Parisian intellectual type, only with a wood-fired pizza oven.

(From Wikipedia: A salon is a gathering of stimulating people of quality under the roof of an inspiring hostess or host, partly to amuse one another and partly to refine their taste and increase their knowledge through conversation and readings, often consciously following Horace’s definition of the aims of poetry, “either to please or to educate”.)

Did you get that? Stimulating people of quality. That’s me.

It’s late – I’m getting punchy. Brian not working so good. (Ha – good typo – from now on will have to refer to my brain as “Brian”. No Brian, no more cupcakes! Bad Brian!) My most common mistake is to type “busty” instead of “busy” when I’m in a rush – as in, “I’ve been really busty lately”, or “I know you’re busty, but…”

This is what you get when you sign on for a month of real-time blogging: not the toppest-notch writing that can be done when IQ levels are high and then subsequently groomed and accessorized until ready to post. Punchy 2am posts with typos is what you sometimes settle for.

So yes. It was an evening of wine and pizza and conversation at the home of someone I recently met at a Forage Farm Table Dinner, centered around a wood-fired pizza oven he built – by hand, mind you – and the very first brick he laid in his life was the one on the front right corner – in his back yard in Bowness. 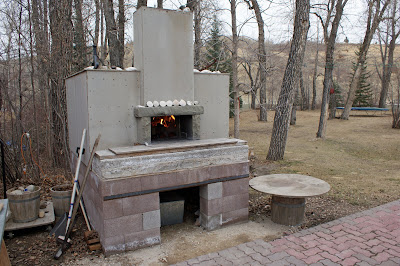 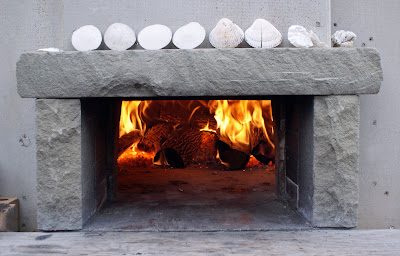 How cool is this? So well insulated it could be 700 degrees inside and still have snow sitting on top. Pizzas cook in around 80 seconds (who needs a microwave?) and the next morning, after the coals are long gone, the residual heat still registers 300-350F, so they bake bread or shirred eggs in it for breakfast. Last Thanksgiving they did the turkey and all the trimmings in the wood-fired oven, then kept the entire dinner – enough for 12 – warm in it until it was time to sit down and eat. 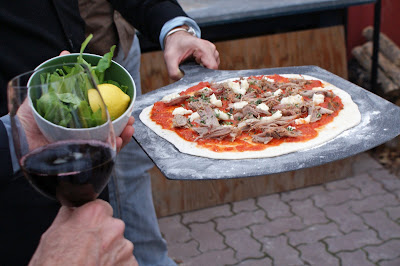 There were 10 of us, only 3 of whom I had ever met. We cranked out thin-crust pizzas, taking turns creating them out of the buffet of toppings – roasted tomato sauce, artichokes, pulled pork, salamis, bacon, cheeses, basil, rocket, pine nuts, caramelized onions, roasted peppers, prosciutto, pears – and sliding them into the pizza oven to bubble and cook in less than a minute and a half. After we made 14 or so and devoured them all, with meaty red olives and prosecco and Châteauneuf-du-Pape, we retired to the living room where we drew numbers and each had to speak for 10 minutes on a subject that inspired us, or we were knowledgeable about, or that otherwise turned our crank. (Far better than Cranium, no?) I was last, which did not bode well for me, but we did have enough to talk about to keep us out until 1 am.

It really was a great evening. (Thanks Brian.) 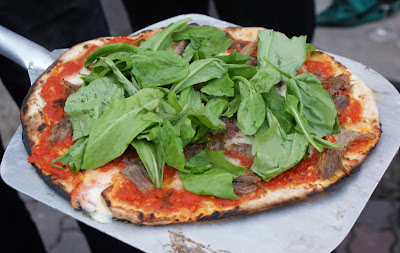 I’ve been requested to post the winners of previous FSF – sorry, I keep meaning to do this, but then forget (having given the stuff away back on Tuesday!) – I’m not trying to keep winners under wraps, honest. Maureen was the lucky winner of the new blender, and Gwendolyn won tea, and Katharine won the Corningware set, a bunch of you won copies of OSC, and over 20 are receiving sourdough starter.. Maria got a Candy Apple Apron.. am I forgetting anything in the past month or so? Sorry, I’ll start posting the winners. But if you win, I’ll email you on Tuesday or thereabouts.

I’ve been looking forward to this one. I was thinking awhile ago of the things I love to get. And one of them is Starbucks cards. There is nothing like having a loaded credit card full of free lattes in your wallet. So I called them up (or their PR firm, anyway), and told them about you all, and how great you are and how I love to give you stuff, and they generously shipped me SIX twenty-five dollar Starbucks cards, PLUS six 1-lb. bags of Pike Place Roast coffee beans to divvy out as I see fit.

So, I see fit to divvy them out two at a time, and spread the love. This week I’ll give away two $25 gift card and 1 lb. coffee combos, and if you don’t win one this time, there will be two more chances. Fair?

So since coffee is on the line here, why don’t we make that our topic of discussion? What’s your very favourite thing to have with a cuppa? (And if not coffee, tea then?)

One Year Ago: Roast Chicken with Lemon and Parmesan Risotto

89 comments on “Pizzas in a Wood-Fired Oven”