I haven’t been fully awake since arriving in Tofino, but haven’t managed to sleep much either. I’ve been hanging on the edge of full consciousness, spaced out, feeling like I could curl up and sleep for two days. In this state I’ve had little interest in cooking despite the fresh air and open kitchen, and haven’t prepared anything beyond oatmeal for breakfast and toast with peanut butter. If my Mom wasn’t here, I’m sure I’d let myself live on eggs on toast and spoonfuls of peanut butter all week. I think I may have coming-home syndrome, something I’m not all too familiar with having spent the majority of my adult life in the same city as my parents, and as such not really ever having the opportunity to really come home to the house I grew up in to stay and sleep and be cooked for and taken care of, an experience I always envy when my friends go home for Thanksgiving or Christmas. When I walked in the door here I almost (very unexpectedly) burst into tears of relief, partially because it was just me and my Mom and Dad (and W, of course… nothing against Mike or my sisters, brother in law, nieces and nephews – it was a riot spending a week here last year with all 13 of us, but you know how that kind of “vacation” can be) and partly because although it’s a brand-new house, not yet finished, it smelled exactly like my grandparents’ house on the Detroit river in Windsor, something my Mom could not detect and I still can’t explain.

Today, after coffee and muffins at the Earth Day festivities in the park and ice cream cones in town, we spent hours at Chesterman Beach, digging channels in the sand for water to run between tide pools and open ocean, walking in the wind, climbing on rocks, and came home too tired to bother with anything more than what we could scrounge around the kitchen. My mom made bacon sandwiches spread with guacamole left over from dinner out before we arrived. And more toast with peanut butter.

But this evening we were invited to the neighbour’s living room for a partial dress rehearsal of Annie, Get Your Gun, which said neighbours, who are in their late eighties, are performing in the upcoming talent show in two weeks. They promised popcorn and beer, but we decided to doctor up a wedge of brie to bring along. With limited pantry stores my Mom spread the brie with marmalade and topped it with chopped walnuts, which we (OK, she) toasted in a skillet with a little butter, salt and pepper. We popped it into the oven while changing into something a little less slovenly, and it was quite phenomenal. 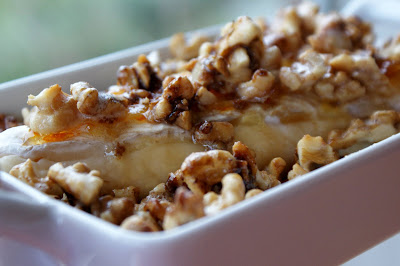 And now here it is after 11 (midnight in Calgary) and the whole house is asleep; I should be too, but there is the small matter of this blog, and part of me really wants to sneak outside and lie on the deck and look at the stars. Then again, there was a rather large chew mark in the garbage bin this morning, that I’m quite sure was not managed by squirrels.

Hey, I’m not really one for horoscopes, but I met Georgia Nicols in the green room at Vicki Gabereau years ago (remember the Vicki Gabereau Show?) and I just really liked her a lot. The January after we met she emailed me my horoscope for the year, and it was surprisingly accurate, and not in the vague way so many horoscopes are, and so I subscribed to her weekly email-out. I just got it. Want to hear what she has to say for me (Scorpio) this week?

Before I say anything, get more sleep. The Sun is as far away from your sign as it gets all year, and the Sun is your source of energy. Your tush is dragging! Pamper yourself and get more rest…

That Georgia is so smart. I think I may just start living by my horoscope.

One Year Ago: PB Banana Wrap and a Latte

17 comments on “Bacon Sandwiches with Guacamole, and Baked Brie”