The only thing that makes these panini and not grilled cheese sandwiches is the panini press – something you don’t actually need to make panini. If you don’t have one, just put another skillet on top of your sandwich as it cooks – the idea is to just squish it, flattening and compacting it slightly – and for that you could really use anything that works. (Have you tried chocolate panini yet?) 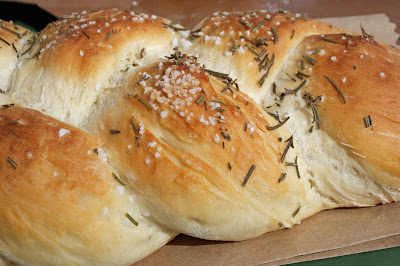 The rosemary-sea salt bread from Bliss (that makes me want to add rosemary and a sprinkle of crunchy salt to my next batch of no-knead bread) made some mighty fine panini, but I was still too lazy to come up with anything more stimulating than just cheese. I had some apple chutney in the freezer that would have been fine spread inside, but it was frozen, and I was impatient. I did manage to squish a clove of garlic into a tiny ramekin of olive oil, and let it sit for a bit before brushing on the outside of the bread – this is something I’ve started to do on regular grilled cheese sandwiches as well. I do adore butter, but that’s part of the problem.

The heel of the loaf got torn into bits and dunked in the last of the oily puddle-yum.

I was convinced that upon my return I’d subsist for at least a few days on leafy green things, lentils and vegetarian soups, but my gut has a different agenda, and is accustomed now to all that good eatin’. 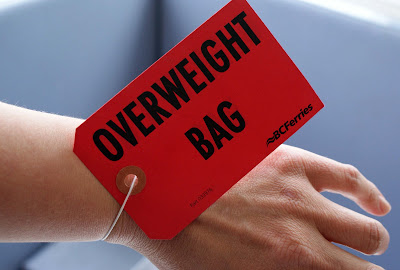 I picked up a new accessory at the ferry terminal – think it suits me?