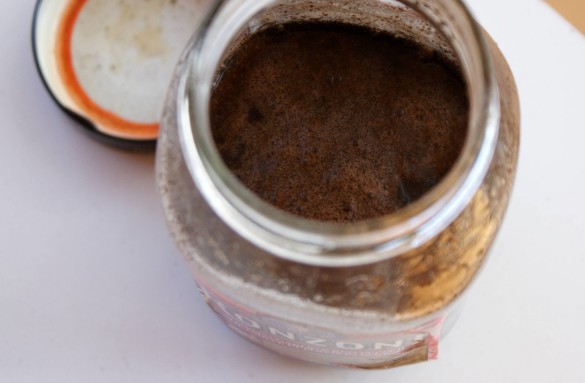 Another clue in the Mystery of the Tight Pants: I had to run over to the gas station to buy cream to whip for our peach crisp the other night. Want to know why? Because the pint we bought earlier this week (in anticipation of a veritable parade of fruit cobblers, crisps and pies-we managed one, anyway) was used up by my SISTER while making us COFFEE every morning (and more than the occasional afternoon). Here I thought it tasted so good because the freshly ground beans were organic and from Salt Spring Island and I was sipping it on the porch overlooking Clayoquot Sound. Nope – apparently it had more to do with the 35% cream, in (according to my calculations) outrageous quantities.

We decided to launch a sort of coffee project this week, partly because both of us are a little bit workaholic and she, as a single mom of three and full-time teacher, grabs on to projects like lifelines when faced with a week completely devoid of structure. She decreed that we would test different beans from different roasters and sourced from various countries, then experiment with brewing processes (drip, perk, French press) until we came up with the perfect cup we could make at home, thus relieving us of our chronic Tim Horton’s problem.

One hurdle: although we have access here to several lovely varieties of beans, there is only a plain old $18 coffee maker in this house, and we drew the line at buying more than a new coffee grinder, purchased at the hardware store.

So we’ve been happily testing beans: Salt Spring Organic, Karma, Frog Friendly, thinking we may have to take care of the brewing method once back home. But then I remembered a story in the New York Times a few years ago about cold brewing, done simply by steeping coffee in water in a jar on the countertop overnight, then filtering it in the morning to make iced coffee. Although there’s nothing stopping you from cooling down your regular Joe and serving it over ice, cold-brewed coffee has a lower acidity and less bitterness than the heat-brewed coffee we’re accustomed to, allowing for flavour nuances in the beans to come through.

So, wait. Cold brewing gets rid of the bitterness? And requires no equipment, nor energy? Why is this not the preferred camping method (beats instant)? And might it further allow us to get rid of the collection of coffee machinery in constant rotation between our kitchen and basement? I mean, if it’s good enough for iced coffee (which by the sounds of things is more finicky), why can’t it simply be reheated in the morning to make a hot cup? Is it just me, or is it a revelation to know it’s possible to “brew” with nothing but ground beans and a jar?

Literally, all you need is some medium-ground coffee, water and a jar. The ratio is half a pound of coffee to 5 cups of water (or for a smaller batch, 1/3 cup coffee to 1 1/2 cups water); stir them together in a bowl or jar, cover and let the mixture steep overnight. It seems there is some debate over whether a 12 hour vs. 24 hour soaking time is best; either way, you have a 12 hour window in between, which allows about as much flexibility as anyone could ask for.

After steeping, strain the sludge; first through a fine-meshed sieve, and then through a coffee filter to get rid of all the grit. (Alternatively, this whole process could take place in a French press; let it sit for as long as you want it to, then press and pour it out.) Dilute the resulting coffee concentrate 1:1 with hot water from the kettle, or cool water or milk for an iced coffee, or pour it straight over ice and spike with cream.

We tested this method against the drip coffee maker, and my sister actually preferred it, even using the concentrate that we had strained in the morning, drank a cup of and then let sit around until the afternoon. (You get lazy after several hours in the sun and wind at the beach.) Turns out a cup brewed using the cold method has about a third less caffeine too – which may or may not be a good thing. She only noticed while trying to stay awake during the kids’ surfing lesson – I didn’t notice at all.

This homemade coffee concentrate will also suit the purpose if your goal is to recreate an Ice Cap in your blender: to ¼ cup concentrate add ¼ cup coffee cream (18%) or half & half (10%), 2-3 Tbsp. sugar and 5 ice cubes, and pulse until it’s a sippable consistency.

One Year Ago: Chili-Rubbed Salmon with Fruit Salsa