I was guilted (by myself) tonight into making a proper Sunday dinner – seeing as I’ll be away next weekend, and the week is quickly closing in like that garbage compactor in the original Star Wars, with me thigh-deep in sludge desperately trying to wedge something in there to buy more time (Princess Leia isn’t so glamorous after all), I felt somewhat obligated to feed the boys properly before I go.

What, I haven’t told you? I’m going to VEGAS! Not only that, I’m going to Vegas WITH 18 GIRLS (one of whom went to see Pretty in Pink with John Cusack, so really with only two degrees of separation, it’s kind of like I’m almost going to Vegas with JC himself. Think we’ll get married?) for a sort of collective 40th birthday party (not mine) and I’m bringing you along, of course. We leave on Friday around dinnertime. VEGAS!! I’ve never been. I’m currently researching best food locales so that I can avoid buffets and maximize dineros and vacation calories – any suggestions are more than welcome.

I had picked up a chicken at the farmers’ market and was about to toss it into my usual cast iron skillet, rub it with my usual canola oil, stuff with my usual half lemon and garlic cloves, sprinkle with my usual S&P and just roast it, when I thought I might be able to do one better. I consulted Jamie. My sister, I’ve heard, makes legendary roast chicken using his recipe, and I thought he might know a thing or two I don’t. I imagine in his library of books there lives more than one roast chicken recipe, but this is the one I came across first. It instructs parboiling the potatoes (I used new ones, some so small they were the size of large peas) along with an entire lemon (which infuses the potatoes as they simmer) then taking them off the heat after 10 minutes, jabbing the lemon all over with a fork and jamming it into the cavity, which allows for better lemon infusion and steaming from the inside (this also works for cleaning microwaves). I did thus. It was fantastic. 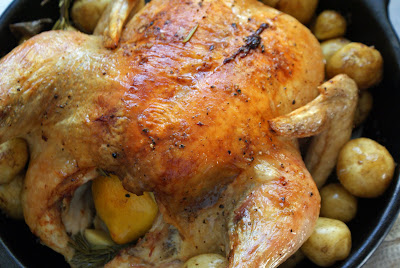 It was a largeish bird, and I roasted it at 375F, as Jamie instructed (but which I usually crank it to anyway). You want to pat it dry before rubbing it down with soft butter, oil, or both; any moisture will keep the skin from getting crispy. Salt and pepper is all it needs up top, and the cooked, jabbed lemon (which will release more juice) and a few garlic cloves or a whole head -cut in half- stuffed inside.

After 45 minutes or an hour, pull it out and tuck the potatoes around the bird in the pan, rolling them around a bit to coat in the drippings, and adding a sprig or two of rosemary if you like. My cast iron barely accommodated them, which was not ideal – in order for things to brown, they mustn’t be crowded. But I already put the chicken in there, and I didn’t feel like washing it.

Once the potatoes are in you can let it go for another half hour to an hour, or until a joint wiggles easily and the juices run clear. Try not to pick all the crispy skin off and eat it yourself – save some for the family, for crying out loud. 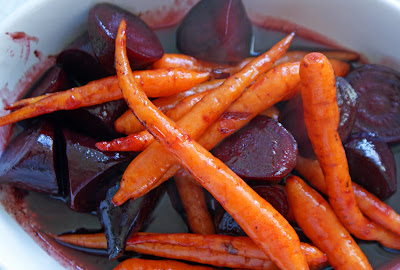 To go with, there were roasted beets in the fridge (left over from a salad) and so I threw some teeny carrots into the potato water and simmered them for a few minutes, then threw them in a pan with chunked beets, some butter, a drizzle of honey and balsamic vinegar, heated through to a glaze.

All told this was easier (and yummier) than the dinner I made for company on Saturday, which took the better part of an afternoon and which was sadly nothing to write home about (except for the pandowdy, which I assembled in approximately five minutes after dinner).