So hey, it turns out I can cook Vietnamese. Who knew?

There are some things that I have a ton of interest in eating, but none whatsoever in making. Vietnamese food falls into this category. So does Chinese food, Korean food; anything I feel like I have no authority to create. I mean besides the basics. I attempted homemade ginger beef once and for all the effort that went into it I’d rather call up the place down the street and slap down a 10 spot for them to do it for me.

Besides, the mystique is taken away when you make something yourself. Do you ever get that sense that everything you make tastes like slightly different versions of the same thing? You know what went in there, and you’re intimately familiar with the process that made it taste the way it does. I’d rather focus my energies elsewhere and leave some things up to the pros.

But then recently I had the occasion to try, and I’m so glad I was shoved out of my comfort zone. Because that’s how you learn – when you expand your horizons beyond what you already know. (Whether voluntarily or by force.)

Satay aren’t really out of my comfort zone – they’d be more accurately classified as a staple around here. But the marinade is different from my usual. I kind of winged it; using about a pound of skinless chicken thighs and cutting them across into half strips, half chunks, and then mashing them more closely together than my usual slightly graceful (if anything about me could be described as such) “S” shape. I liked it this way. 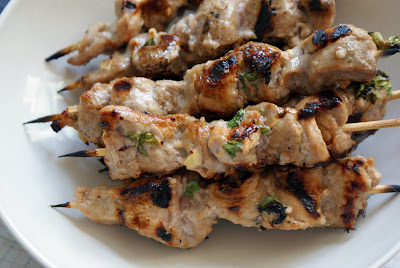 Fried rice is one of those things I tend to go about on my own. Even when I find a recipe I’m one to ignore it, thinking I know what I’m doing, and right here is a perfect example of something I make that always comes out tasting the same, with the occasional fluctuation depending on how heavy-handed I am with the soy sauce, or whether or not I opted to add curry paste.

But this. It elicited as many oohs and aahs as I’ve received for anything that has come out of my kitchen. The first time I made it, the recipient (who shall remain anonymous to protect his reputation as a mostly generous person) didn’t even share. I think it was the seasoning – the rice vinegar and sugar and fish sauce – but wow. It’s like fried rice that really means it.

Remember – you need leftover cold rice to make a good fried rice – the time in the fridge gives the grains a chance to separate, so that they won’t clump together and get all sticky in the pan. 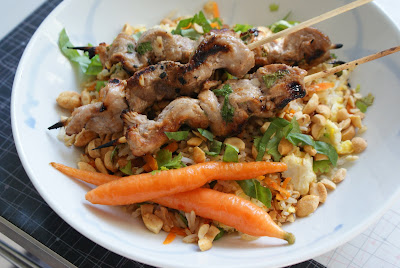 One Year Ago: Meatloaf, (S)Mashed Potatoes and Peas