Swerve is out! That means I can officially share the recipe everyone was drooling over last week. And in fact I did make it again tonight, having come home to not much in the fridge but cheese left over from this recipe, and milk that I threw in the freezer to use in baking and stuff like this. I used frozen spinach, and it did the trick. I also made it with brown rice pasta this time, in a tentative move away from consuming so much wheat. I know, baby steps.

Also: I have news!

No, it’s not a bun in the oven. But – it’s a boy! I get to host – yes, me – one ANTHONY BOURDAIN when he comes to Calgary in January. Maybe you’ve heard of him? My stomach is already doing flip-flops over not only getting to meet him, but INTRODUCE him. Do you think that counts as an ab workout? Maybe I’ll have abs of steel by January?

Here are the specifics: he’ll be giving a Kitchen Confidential lecture on Tuesday, January 12th at the Jack Singer Concert Hall in the Epcore Centre for Performing Arts. Doors open at 7; the talk will start at 8. Afterward I believe there will be a reception (to which you can buy tickets, I think?) with Janice Beaton Fine Cheese and wine from Willow Park Wines & Spirits. I’ll keep you posted as I learn more about it myself.

But that’s not all. In other news: remember that night my sister was over and we sat at the table going over paperwork and making an offer on the house across the street? It’s official! She bought it! I can still hardly believe all the stars were aligned (you wouldn’t believe the domino effect of events that allowed this to all work out) and she gets possession of her very first very own house in mid-December. She’ll move in with her kids, whom you may have indirectly met here, and I can hardly wait. Earlier tonight W said, completely out of the blue: “when Ben moves across the street from me, he won’t be my cousin anymore, he’ll be my brother.” It was so cute I had to sit down for a minute.

And that’s it. I think. No wait, there’s more… but I’ll save that for another day. You’ve been waiting so patiently for this mac & cheese recipe. 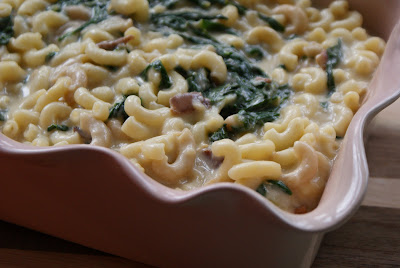 Ah. I just remembered that because Swerve is out it’s FRIDAY, and as such I need to give something away, don’t I? I’m a little disoriented – in the best possible way of course. Wait right here while I go dig through my tickle trunk.

How about a bottle of wine? I brought home a few bottles of Mission Hill wines – they were at Christmas in November, supplying wines for our dinners and hosting wine tasting sessions, and if you are ever in the Okanagan I highly recommend visiting their stunning newly rebuilt winery. And if the random number generator comes up with someone outside Calgary, your consolation prize will be a cookbook – your choice of One Smart Cookie or Grazing – because I couldn’t imagine attempting to ship a bottle of wine. Congrats to June and Sue, who have autographed cookbooks by Ken Kostick and Michael Smith on the way!

So – had any great dinners lately?

One Year Ago: Cured Meats (with Michael & Anna Olson) and Granola Nut Clusters