I roasted lemons! Cut organic ones into wedges, sprinkled them with sugar and blasted them until they turned soft and fleshy and oozed tart, caramelized juice. Then popped them into a jar, poured hot simple syrup (equal parts sugar and water, brought to a simmer) overtop and tucked in a vanilla bean (a rosemary sprig might have been a good idea too) for good measure. 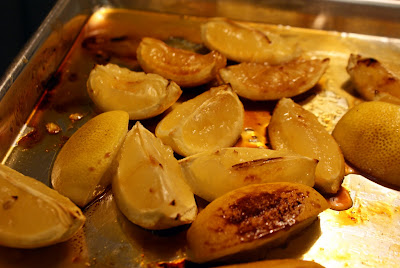 So I just had to pop in and tell you about it, even though it’s far too dark to take a decent picture and Mike is patiently waiting for me to start a movie (One Week), because nothing excites me on Saturday night like applying heat to a citrus fruit in a way I hadn’t considered before. And I thought you might get a special little thrill out of it too.

My activity relates directly to an article I’m working on on preserved lemons, which I admit I never fully understood. I wish I could tell you how to make the chicken tagine we’ve eaten for two nights straight, plus lunch (it really is better the next day) but I have to hold out. But it occurred to me as I played with the salty, brined lemons that have their limits, that lemons could as easily be preserved as something sweet; or at least not so salty as to be prohibitive in the kitchen. Not so sweet as to be marmalade-ish, I have plans to thinly slice these into a pound cake tomorrow, and perhaps whirl them into something or other. I’ll keep you posted.