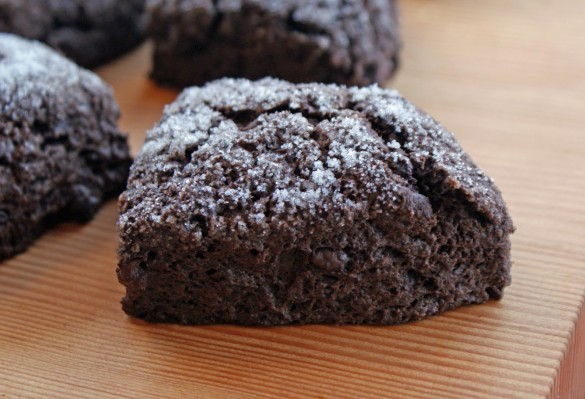 I discovered a box of strawberries in the bowels of the fridge this afternoon, and cream that needed to be used up before we leave, so I made a batch of bittersweet chocolate scones to carry them. (To our mouths, that is.)

I was a little bored with traditional biscuits, to be honest, and remembered a recipe I had seen at some point in the past year – this laptop is like an ultra-slim carrying case for every cookbook and recipe I could possibly need – and we had cocoa.

I’m going to send you over to Seven Spoons for the recipe though – it’s hers, and I want to introduce you directly if you have not yet made her acquaintance. I know you’re going to be fast friends. The only things I did differently was to cut in the butter with a whisk and my fingers (not having an electric mixer), stir a handful of mini chocolate chips into the dry ingredients (that’s what we had), use half and half instead of 18% cream and skipped the egg white wash; the dough was plenty sticky to allow the sprinkle of sugar overtop to adhere. 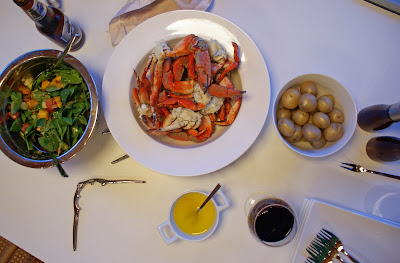 Dinner itself was sourced locally – plucked directly from the ocean with our own hands. (Yes, we caught, killed and ate our meal. Or more accurately, I caught, boiled water for, and ate mine). Having dropped our crab trap off the dock about a block away a few times with no luck, we were tipped off that crabs are particular fans of hot dogs. Who knew? So we inventively tucked a few into an empty water bottle, rigged it up with wire in the cold rain, and dropped it again. Voilà – crab for dinner. With garlic butter, boiled new potatoes, spinach salad with mangoes, and red wine from the Okanagan. The kids were more enamoured with the crab bait.

Welp, I guess I’m half a hundred. My incredibly