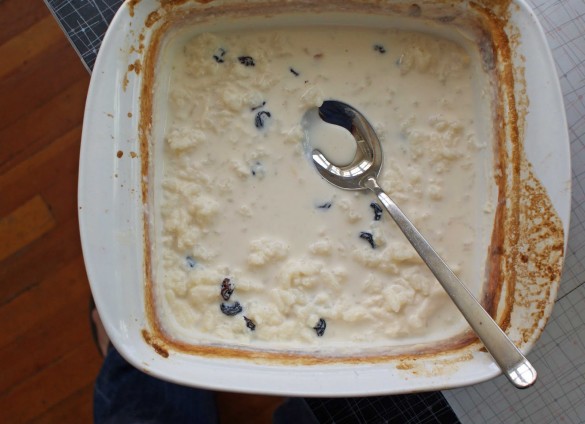 It’s not pretty, I realize, but it was delicious.

It’s snowing today. Big, wet flakes coming down like slurpee. There’s family drama (Mike’s side – they’d cast an excellent reality TV show, let me tell you) and a mess of deadlines – a rice pudding sort of day if ever there was one. I just slid a batch into the oven; it took less time to make than a pot of coffee. (And goes really well with coffee, by the way.)

And guess what? I have a new little spot here on the world-wide inter-web – over at the Family Kitchen – I was asked to write over there as well and happily agreed, because of all the things I do, what I Iove most is writing about and sharing food with all of you. So over there I’ll have some new stuff, but it won’t take me away from this place, I promise. It’ll be like having two kids instead of one – twice the love, right? Sometimes there will be crossover – I just posted this recipe over there as well.

I made this last week out of curiosity as much as anything; flipping through an old copy of the 865-page Fanny Farmer Cookbook, my eye caught the ingredient list of this baked rice pudding – 3 tablespoons of rice to 4 cups of milk was called for. Typo, I thought. It couldn’t possibly work. But the intro claimed otherwise; “the little bit of rice to a quart of milk is correct,” it reads. Huh. Of course I had to put it to the test. For research purposes, you know.

It certainly was the simplest rice pudding I’ve ever made. I stirred the tiny amount of rice into the milk with sugar, and slid it into the oven. I did not have high hopes. I stirred once or twice, to keep the rice from settling. It was like stirring milk soup. An hour in it looked the same. Two hours in it looked the same. I took a peek whenever I happened to pass through the kitchen. I couldn’t imagine it somehow morphing into pudding.

But. You know how when you make rice pudding and it’s perfect and then you put it in the fridge overnight it thickens so much it doesn’t much resemble pudding anymore? It worked to our advantage this time. When I took it out it was still more than loose – it was runny, with a thin crusty skin on top. I stuck it in the fridge. The next day I pulled it out and peeled off the pudding skin. And it did resemble rice pudding, albeit a loose, creamy one. I tossed in a handful of red flame raisins and took a bite. The milk had thickened to the consistency of thick cream, but it was still soupy. It was ice cold, sweet and addicting. I stood at the countertop and shoveled in bite after bite. The next day I craved it. And now I have another batch – to which I added more rice (1/4 cup), less sugar (1/4 cup – or even less honey) and salt (just a pinch, rather than 1/2 tsp.) – that should be finished and warm by lunchtime, chilled when the boys arrive home hungry. 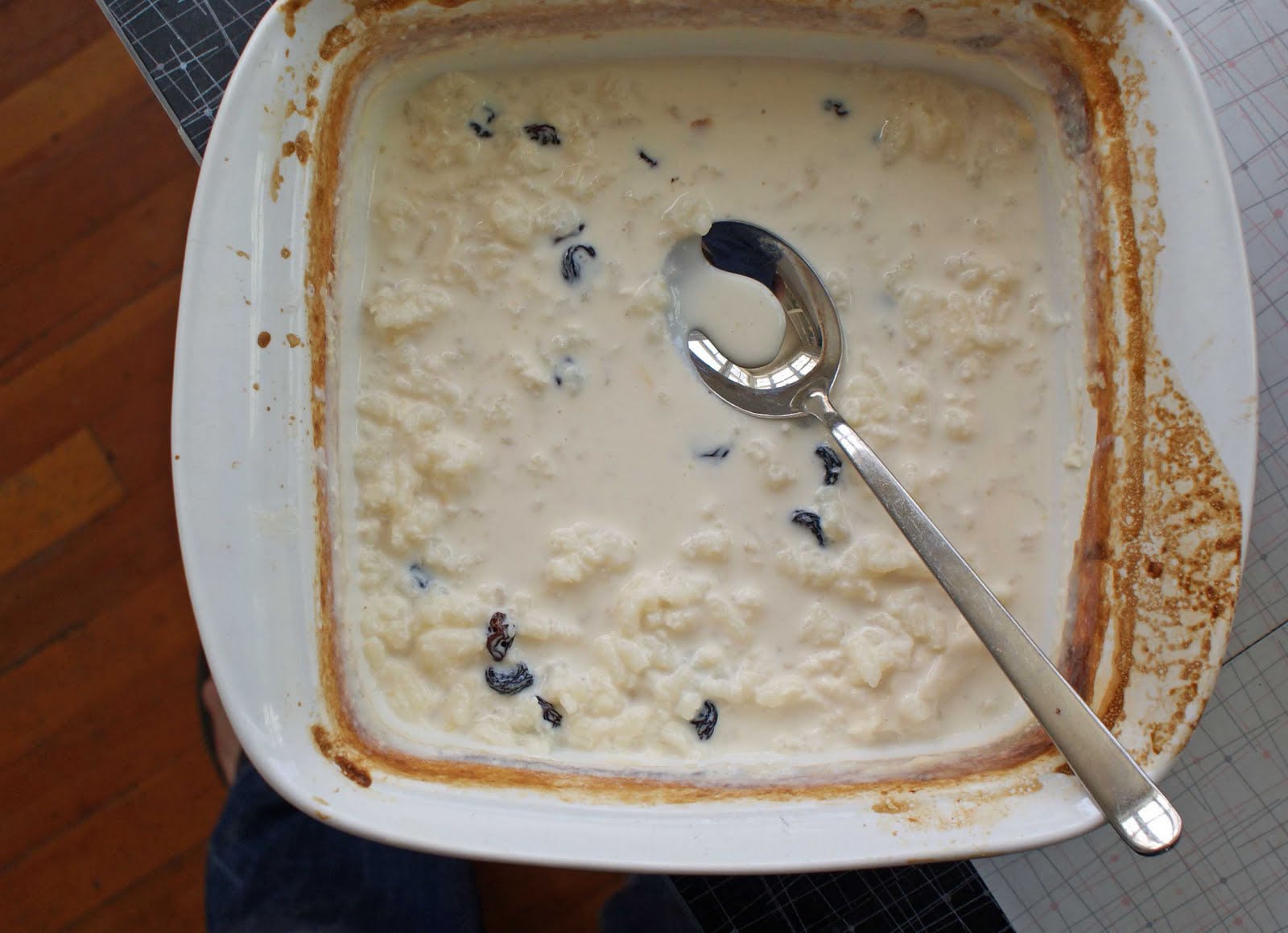 Preheat the oven to 300°F. Put all the ingredients into a buttered baking dish and stir. Bake for 3 hours, stirring three times during the first hour of baking so that the rice doesn't settle. Eat warm, or chill first.

Preheat the oven to 300°F. Put all the ingredients into a buttered baking dish and stir. Bake for 3 hours, stirring three times during the first hour of baking so that the rice doesn't settle. Eat warm, or chill first.