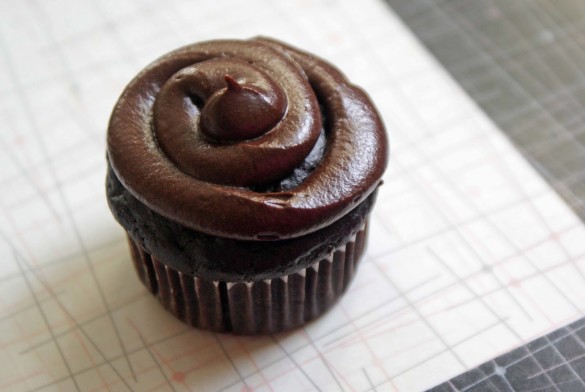 I remember the day it occurred to me that being born in August meant never getting to bring cupcakes to school on your birthday. W was due the end of July, born on August 4. This sad fact occurred to me sometime around May, and I was crushed. I mean seriously crushed. Panicked, even. I cried, partially due to the raging hormones I’m sure, over cupcakes. Or the lack of opportunity to make them to mark the most important event in the year of a little kid.

I got over it – kind of. Most everyone is away on the first long weekend of August, which sucks a bit every time W’s birthday rolls around. And he hasn’t started school yet. But today was his preschool’s May pole party – a performance for which parents were asked to bring a little smackerel of something when we arrived at 11 am. Last time we were asked to such an event – on Valentines’ Day – the note home requested “a small snack, such as hummus”. What did that mean? No cupcakes? Would sweets of any kind be frowned upon? I spent more time debating what to bring for a preschool Valentines’ Day party snack than I might have spent composing a menu for some grand function. I settled on popcorn. Festive, and no one could accuse me of being unhealthy. 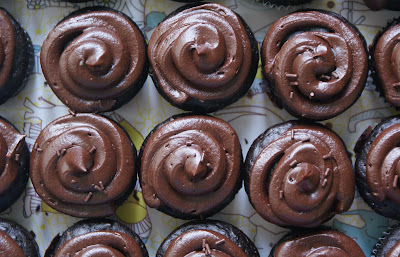 But this time we made cupcakes, dammit. Little ones. W got to choose what kind, and naturally picked chocolate cupcakes with chocolate icing. We baked them together last night, he becoming so adept at cracking eggs that he no longer gets his fingers goopy. I put them in the oven before reading him his bedtime stories, and this morning the minute he woke up he ran downstairs to see if the cupcakes were baked. We frosted them over breakfast.

He wanted chocolate sprinkles, too – but there was only about a teaspoon left in the bottle, and a good half teaspoon went into his mouth and all over the floor. 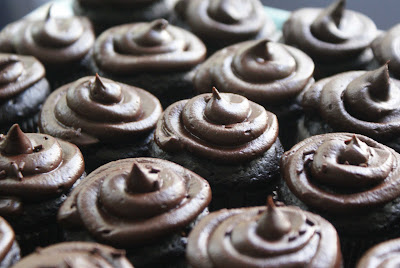 I know I’ve shared this chocolate cake recipe before, probably more than once. It’s my favourite formula for chocolate cupcakes. The quick buttercream frosting ingredients were tossed in a bowl and beaten with a hand mixer (I could only find one beater – pretty sure the other is in some sort of mock-up space station in the basement), measured by eyeball: a blob of butter, shake of dark cocoa and much bigger shake of icing sugar, and a bit of water to get it all going. (I usually make frosting like this, adding more sugar or water as needed until I have something spreadable.) But what I really want to tell you about is how to make thick snaky swirls on top far more easily than even spreading it on with a knife.

Once you have something that has the consistency of frosting, scoop it into a zip-lock baggie, squish the air out of the bag and seal it. Snip off a corner and pipe it out – it will extrude nice and clean and smoothly, and when you’re done you can toss the baggie out. If you have several kids wanting to get in on the decorating action, you can give them each a bag. You could mix up different colours and alternate them, making stripey swirls. Or snip off just a tiny bit and use it to write stuff. Baggies are brilliant when it comes to cupcake decorating. Seriously- we did this while W ate his eggs on toast. It doesn’t have to be a big production. Unless of course you want it to be. 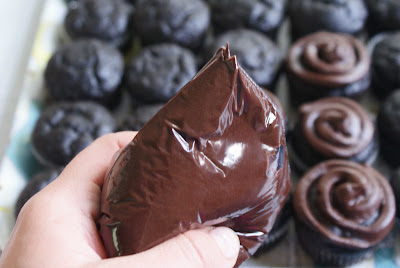 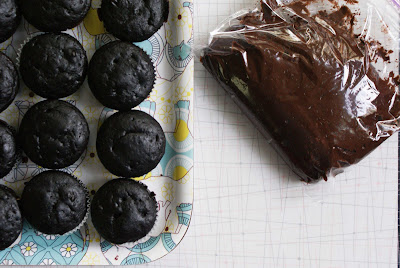 I know- they’re crazy dark cupcakes, hey? I used Bernard Callebaut cocoa (which isn’t the same as plain old Callebaut, right? You know that, right?) and was tempted to add orange juice to the frosting, but W may have detected that I messed with his chocolate on chocolate action. And I don’t want to get between a boy and his chocolate. 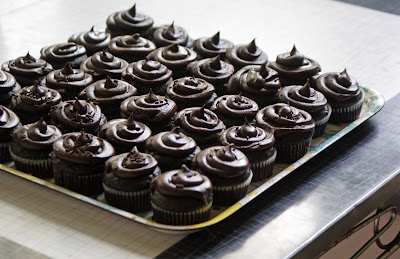 The recipe made 4 dozen mini cupcakes, which I baked in mini muffin cups. Every time I see one at a yard sale, I buy it, and now have approximately a hundred thousand. They’re the perfect size, even for grown-ups – three bites – perfect when you don’t want to commit to an entire cupcake. If you do, you can have three. Here’s the recipe.

33 comments on “Chocolate on Chocolate Cupcakes”