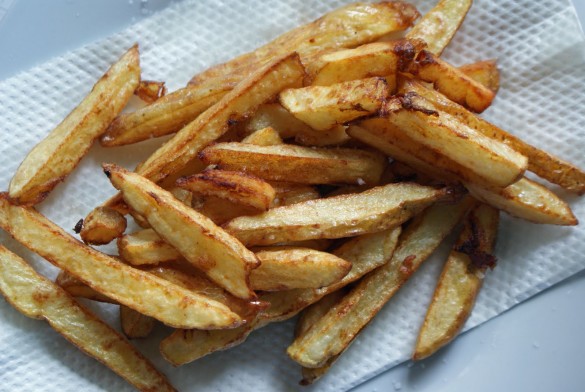 Check this out – a new method for making amazing fries with less oil (!) and no need to double (par) fry. I never would have thought of this. It’s rocking my world like the no-knead bread. Except that I don’t eat fries quite as often as I eat bread. In my dreams, maybe.

Yesterday I followed a trail of bread crumbs (fry grease?) to an old Cooks Illustrated post about French fries (this is what happens when I’m supposed to be working) – it seems they burned through about 50 lbs of potatoes to come up with this method, wherein cold potato is set in cold oil in a pot and then brought to a boil together, much like you’d do when boiling potatoes (in water). The crazy part is – there’s apparently less oil in these cold-start fries than in traditional ones. I don’t understand why, but I never did that well in science. And I ditched chemistry for bio.

I’ve been dying to get in the kitchen and try something new, which has been difficult with the dwindling hamper on our dining room table. But I have potatoes! I have oil! I have salt! Giddy-up.

With fries like this, you need a good wobbly homemade mayo. And hey! I have eggs! I have oil! It’s clearly a sign.

So – you can go to see the original recipe at Cooks Illustrated, but it does seem a little wordier than I think it needs to be. (Not suggesting I know more than Cooks Illustrated, of course. But I did streamline it a little.) I didn’t measure my oil, nor my potatoes. I didn’t use bacon fat (although that does seem worth a try, don’t you think?). I cut two potatoes (unpeeled) into even sticks and put them in a pot, and covered them with canola oil. I did as I was told and covered the pot to bring it to a boil, which did indeed take about 5 minutes, but then I took the lid off (there’s condensation there – you don’t want that in your oil) and let it bubble away. It was odd, like I was boiling potatoes, only with oil. I didn’t wait to give them a stir though-I did so at about 10 minutes. Not sure what the difference is.

Anyway, in about 20 minutes they were beautiful and golden, and I took them out to drain on paper towels and showered them with salt. They had a lovely texture.

And mayo. I’ll send you over to Delicious Days – they have a wonderful tutorial. 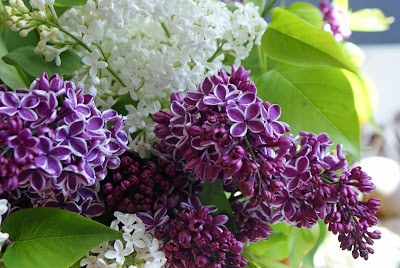 (And our friends/neighbours brought over lilacs! How gorgeous are these?)