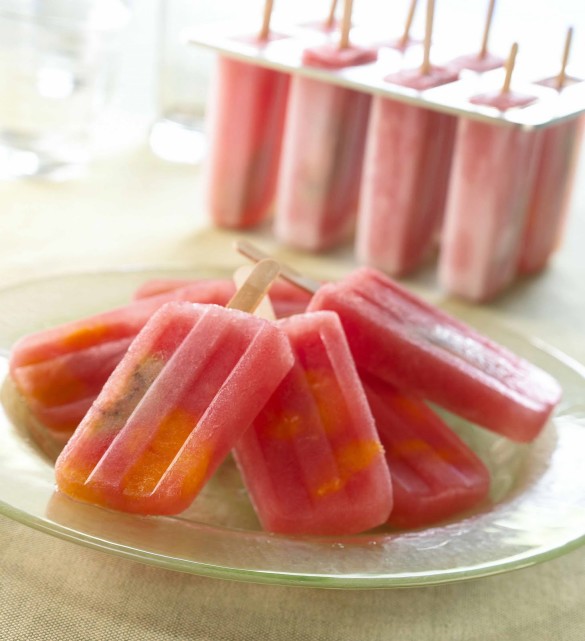 Avery, this one is for you. (Or more for Ruby. Could she be any cuter? She picked up a baseball in the yard yesterday and said in her teeny voice: “baseball”. Is she brilliant, or what? She’s totally going on the list of girls next door(ish) that W is allowed to date. In 20 years or so.)

If she loves Popsicles and watermelon, these as you said may blow her little mind. And of course they’re pure fruit, and don’t contain high-fructose corn syrup and various colours, stabilizers and gums, like most store-bought varieties do. All you do is puree watermelon – cut it in chunks and whiz it in the blender or food processor – because it’s mostly water it purees really well. Pour it into popsicle molds, add some fresh fruit if you like (blueberries, halved grapes, chopped kiwi and the like) and freeze them. If you don’t have popsicle molds, pour it into paper dixie cups, cover the cups with plastic wrap (to hold the stick in place) and poke a popsicle stick through, then freeze.

I haven’t had a chance to actually make them myself today, so I totally used the photo from the National Watermelon Promotion Board (with permission!) – but isn’t it pretty? I wish I could find molds that would make popsicles that look like that. And I wish I could then take a photo that looks like that without said popsicles melting all over the table, or getting dog hair stuck in them. Although I suppose it would add extra fiber. 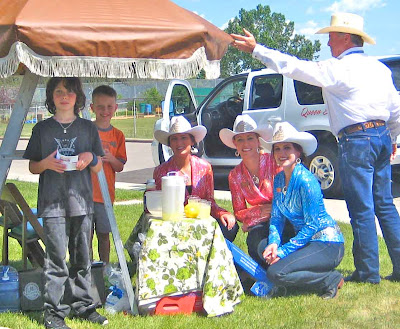 In other news – check out who stopped by A’s house today to buy some lemonade! The Stampede Queen and two princesses were parched, and so pulled over up the hill. A brush with royalty. They got to feed the Queen.

The City of Calgary asked if I would share some of