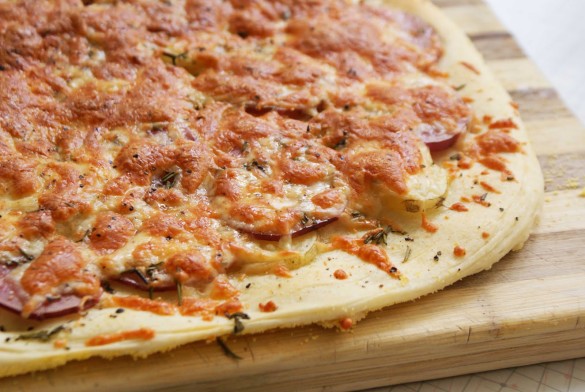 I’m writing this while on hold with Visa. Trying to book a flight to Vancouver, I was at the very end asked to prove my identity on a pop-up Verified by Visa page, which prompted all the answers to the questions they had as I began to type them in, then told me I’m wrong – try again. Like there are alternative answers to my mother’s maiden name. So I’m on hold at 11 on a Friday night when I should be working on any number of stories I have due this weekend, or making mini flapper pies for a party I’m cooking for tomorrow night, or I don’t know – sleeping might be a good idea.

So yeah – potato pizza, hey? I never really got the double-carb-whammy concept, but with an abundance of beautiful, delicate-skinned potatoes from the farm (and an overflowing but not-yet-harvested potato condo in my back yard – can’t wait to show you!) I really was pushing for new ideas. And I need to carb load for my marathon pie-baking contest in the morning. (Honestly – Pierre and I are judging pie, jam and homemade wine at the Bowness Fair at 10 in the morning. (They’ll also have a produce swap, if you have too much of a good thing and not enough of another.) 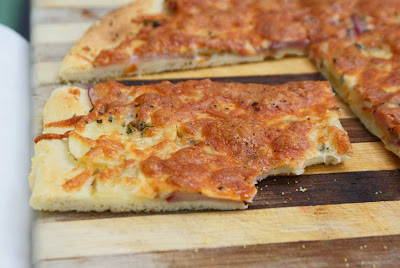 So the pizza. I took a ball of dough out of the freezer, sliced the purple and white potatoes as thinly as I could (which was pretty thin, using my new kick-ass Japanese knife from Kevin’s shop) layered them, scattering between the layers with roughly chopped garlic and fresh rosemary, then drizzled the lot with some olive oil into which I squished another clove of garlic before starting this whole process. 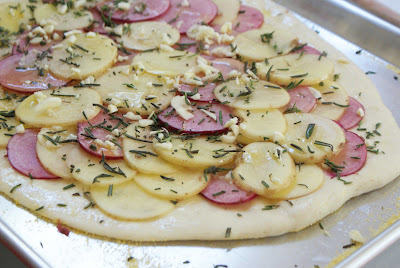 Then scattered cheese over the top and baked it at 450F for 20 minutes, until golden. It was not at all as involved as it sounds. Having spent the past two days doing cooking demos at the Kerby Centre Expo I also had copious amounts of quinoa salad and salmon, which I spread with pesto and slid into the same hot oven for about 10 minutes. (What’s convenient about Hamburger Helper again?)

And I know, it’s Friday. And I have some Free Stuff for you! Honestly the Fridays keep blowing by and I keep on missing them. But I caught one! And I have something for you that I think is hilarious, that I bought at Kulinary Kids last week when W and I were hanging out and cooking with Chuck Hughes from Food Network Canada. 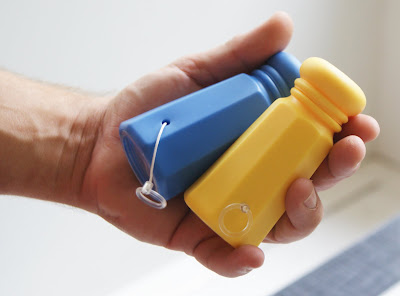 Check it out – self-shaking salt shakers. You pull the string and they shake on their own. I had to buy them. (It was hard to capture their shaking action on camera. Those are Mike’s hands, posing with them. Don’t you think he should be a hand model? Do you think there’s any money in that? Do you think it would go to his head?)

As always, I love hearing what you’re eating. And if you have any suggestions for new ways to use chard, potatoes and zucchini, that would be fab. I’ll do a random draw next Tuesday!

46 comments on “Potato Pizza with Garlic and Rosemary”