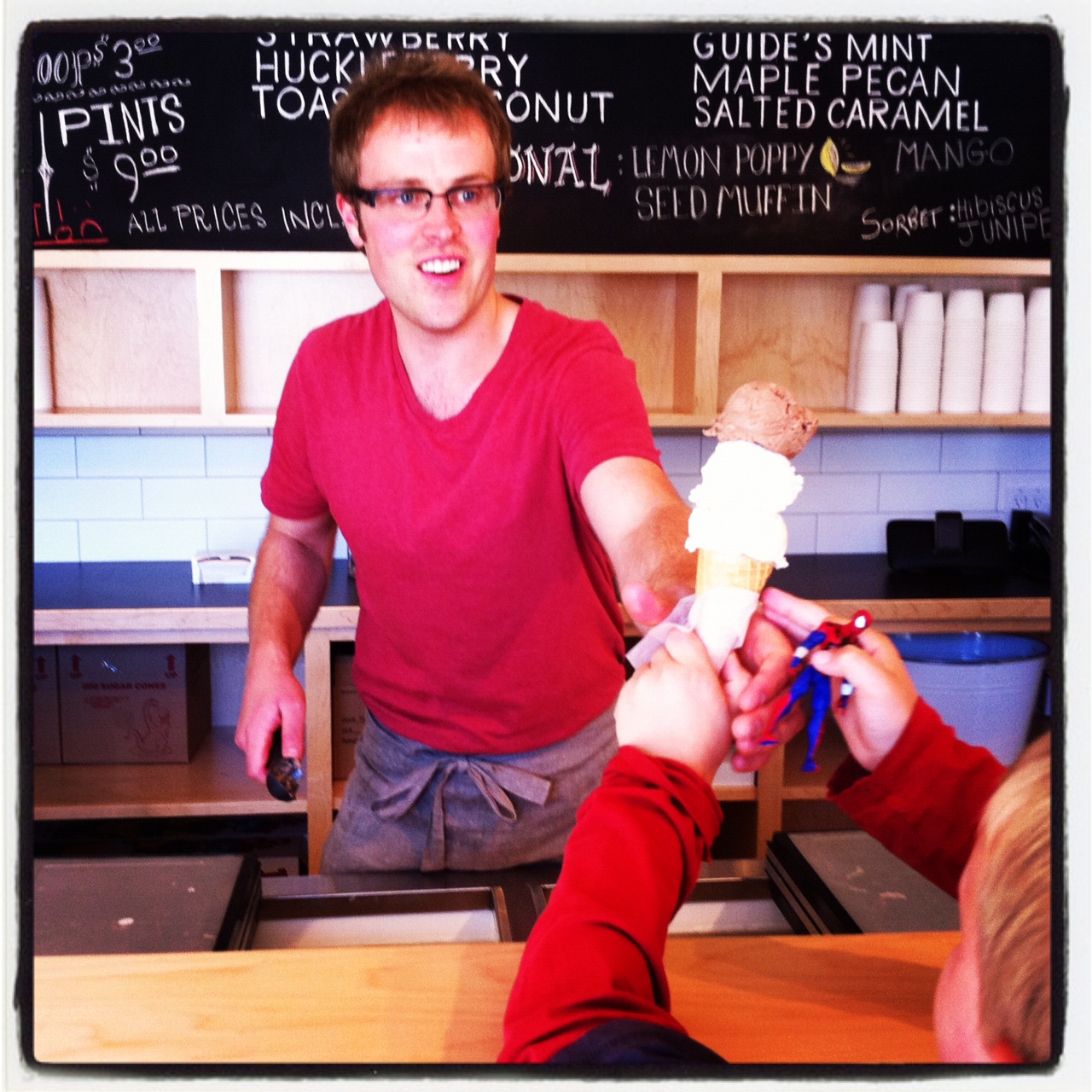 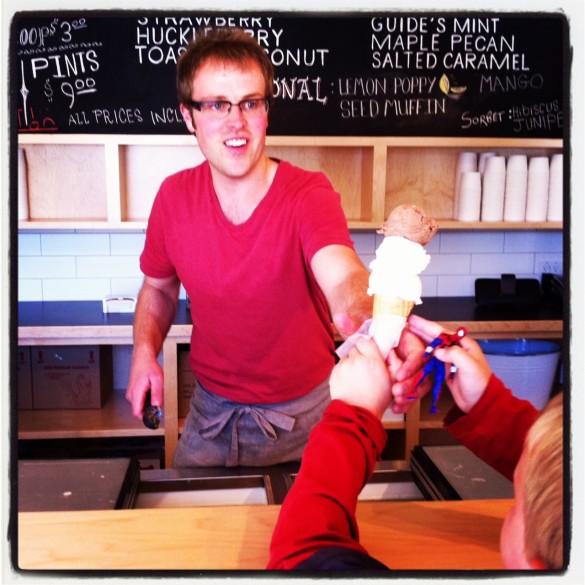 I just dropped in to tell you a few things.

One: I may have a bit of an ice cream problem. Not news.

Two: My new neighbour-slash-mixmaster, Billy Friley, may not help in this regard, and I’m so grateful that he had a quarter-life crisis, crashed out on his Grandma’s couch for a week, tasted some huckleberry ice cream from a micro-ice creamery in Montana and had an epiphany, deciding right then and there it would become his life’s work. Or at least his Next Big Thing. 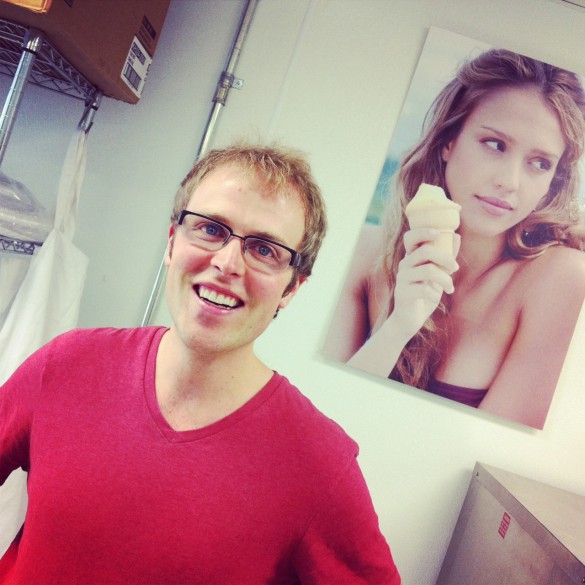 Three: After said epiphany, Billy spent 13 months in a little space in a parking lot off 10th Ave SE learning how to make ice cream from scratch, with only Jessica Alba to keep him company. She still oversees the machine in the corner, where over the weekend Billy gave W a quick tutorial in homemade salted caramel ice cream. His place is open now, called Village Ice Cream, and it’s worth poking about until you find it in that back parking lot by the train tracks. He makes huckleberry ice cream, and cardamom (freshly ground, from Silk Road Spice Merchant), and Girl Guide mint with homemade chocolate cookies, and toasted coconut using his mom’s recipe. And salted caramel. 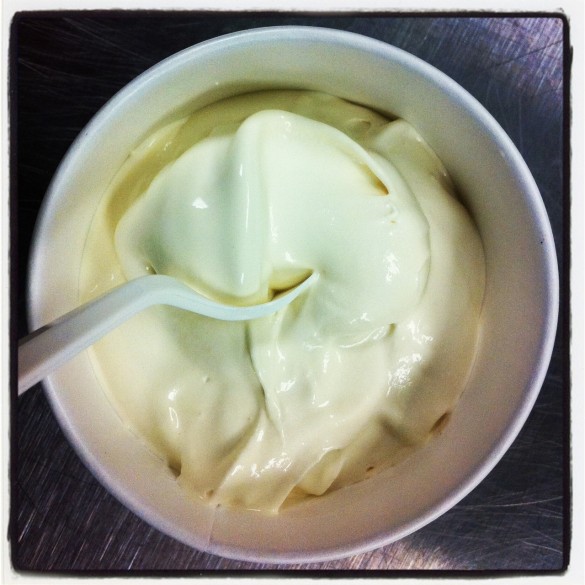 Four: I’ve had salted caramel before, but never like this. I have become mildly obsessed with the idea of setting a creamy scoop on top of a stack of pancakes, and letting it slowly melt down the sides. This will happen. Oh yes. I’ve also heard it makes a divine float in banana bread beer. (Also a thing.)

Six: I meet interesting people and taste new things all the time, and don’t always manage to post about them here. Or often I choose not to, because not all of you are from Calgary, and unless you’re planning a visit or just love reading about what people are doing with food in other cities, it may not be relevant. 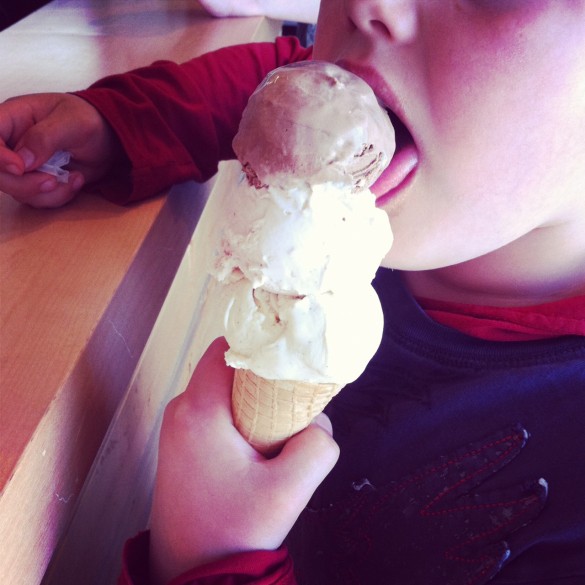 And so one day, after we went for ice cream, my teenage niece (E) helped me figure out Tumblr while hanging out on the couch, and I kindasorta wound up starting a new offshoot blog – a spinoff, like Frasier from Cheers, that’s a kind of a cross between a blog and Twitter. I can post quickies from my phone, like Twitter, and just snippets, not whole big long posts like I tend to do here. I called it The Gullet, because I liked the name, and right now I’m just playing around with it – it will become part of my summertime blog makeover project, as this place could do with an overhaul. (And good news! I’m switching servers, so we shouldn’t have any more problems with slow downloads.)

So there you go. Everyone, meet Billy! Really, his ice cream is completely divine. And they make all their waffle cones FROM SCRATCH, ONE AT A TIME. Yes, it happens. If you’re going to go for ice cream, I think, it should be this good. This is exactly what ice cream should be.

Apple-Peach-Raspberry Hand Pies (on the Grill!)