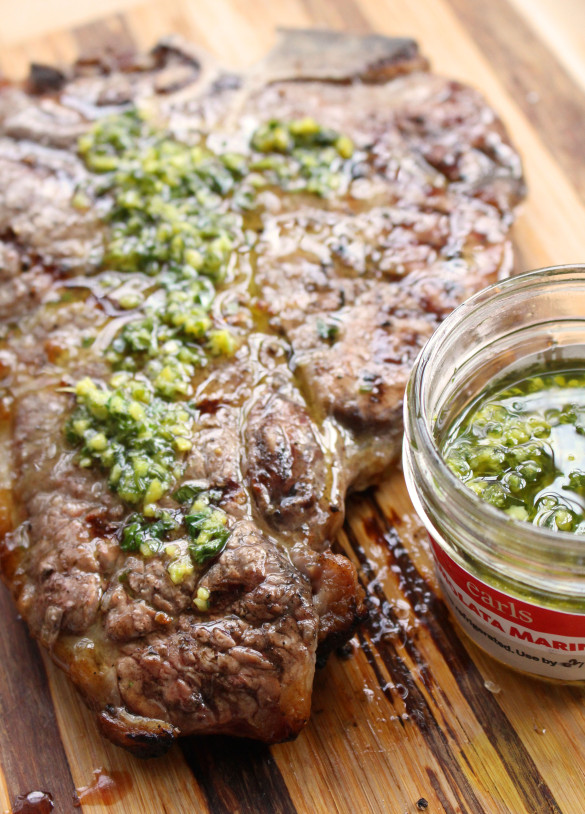 If you live somewhere where there are actually things growing out of the ground already, lucky you. Here in Calgary, there are still small glaciers on most streets and in yards, but this weekend the temperature finally crept up past zero. Way up past ten, even! Hello, barbecue. It’s been awhile. 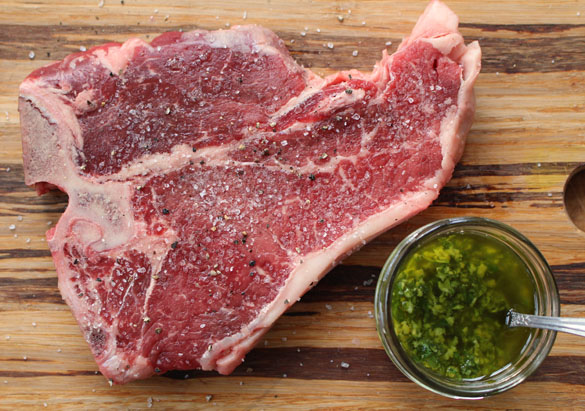 Last week I had lunch with a local rancher (one who supplies our Calgary Co-op stores with beef that’s born and bred in Alberta), and was given a gorgeous T-bone steak to take home, which we used as an excuse to fire up the grill (which since October has been subbing as an outdoor freezer). When you get a taste of spring, even when there’s still snow on the ground, you gotta jump on it. 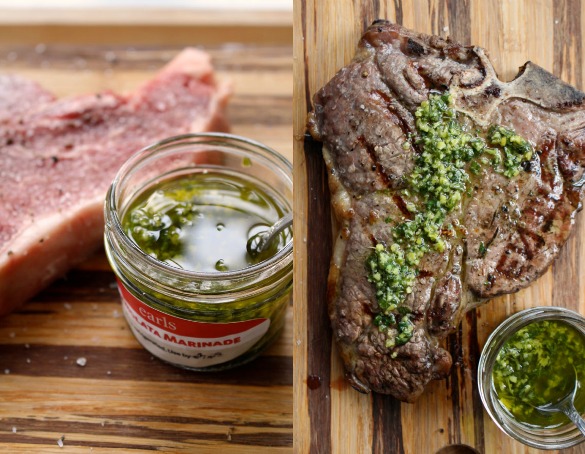 Christoph the rancher says that when you have a steak like this, it doesn’t need anything but salt. I tend to agree. But I had a jar of gremolata in the fridge – a gift from Earl’s Tin Palace to celebrate their post-flood re-opening just last week – which being a mixture of garlic, lemon, parsley and olive oil, is the perfect accessory for a simply grilled steak. (I may not know how to dress myself, but I have an idea of how to accessorize food.) In fact, you can make a pretty fab potato salad by dousing warm potatoes with gremolata, then a big glob of mayo; the gremolata brightens it, adds that hit of acidity that’s usually obtained with pickle brine, and decorates it with bits of green. Springy! 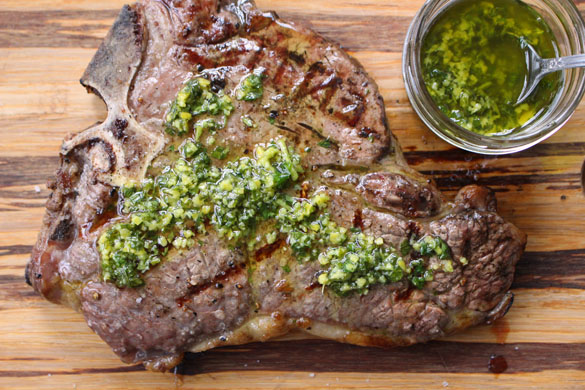 As for the steak, you don’t need a recipe so much as basic instructions on how to cook one. Once you’ve selected your steak and have decided it’s destined for dinner, pull it out of the fridge so that it can start cooking from room temperature. If it appears wet, pat it dry with a paper towel, and shower it generously with salt – I add freshly ground pepper, too. I like to cook ours in a cast iron skillet or on the barbecue – either way, get it smoking hot before you put the steak on, then leave it for 3-4 minutes – don’t fiddle with it or move it or (gasp!) squish it – until it develops a nice bottom crust. Flip it over and cook for 2-3 minutes on the other side, then set it on a plate and let it rest for 5 minutes. This will make an inch-thick steak medium-rare; you can adjust your cooking time accordingly. 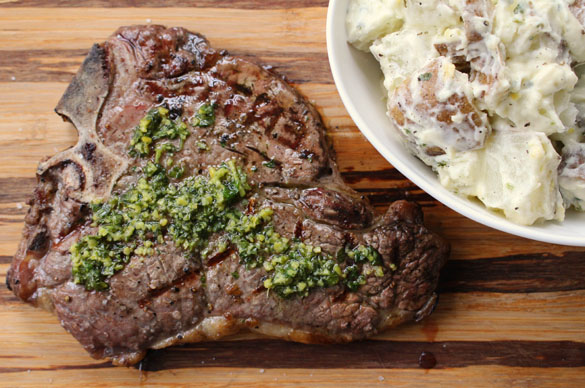 For the potato salad, I cut russets – only because russets were what I had, but I don’t mind them in a potato salad – into big chunks, covered them with water and brought them to a simmer. (This was faster than baking them, which would have been pretty divine too.) Once they were tender I drained them and tossed them, still steaming, with a generous pour of gremolata and a fairly enormous spoonful of mayo. Salt and pepper, if it needs it, and bingo – potato salad that I like even better served warm, especially alongside a steak.

To make your own gremolata, all you need is lemon, garlic, parsley and olive oil, and a means to mash it all together. The stuff is brilliant to have a jar of in the fridge, and once you get hooked on it, you’ll find plenty of uses for it – anything from steak to fish, drizzled on fresh bread, you get the idea. 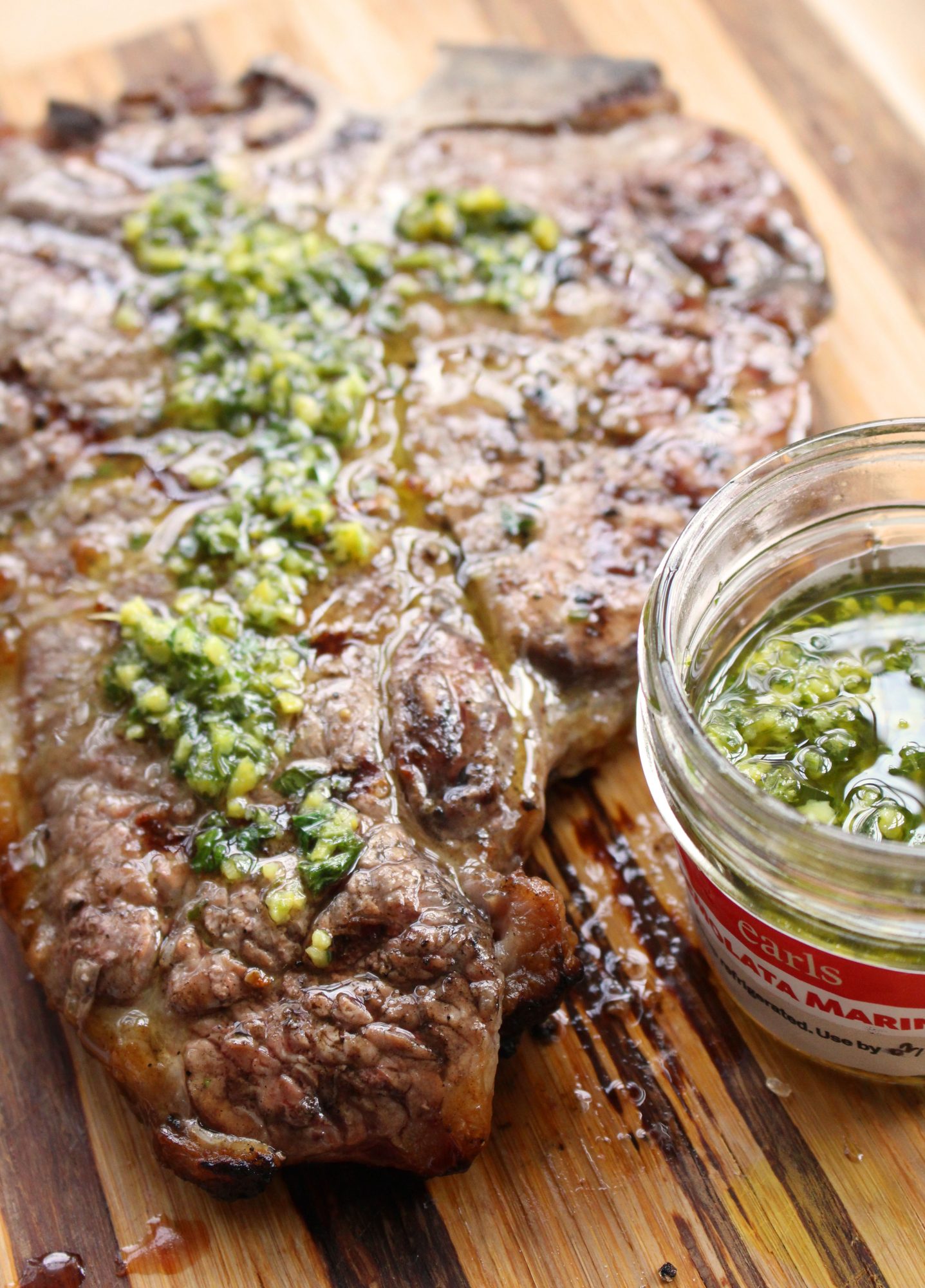 Stir, whiz (in the bowl of a food processor) or mash everything together with a mortar and pestle, adding enough olive oil to create a loose sauce; store in a jar in the fridge for up to a week. (The gremolata will improve in flavour after a day or two.)

Stir, whiz (in the bowl of a food processor) or mash everything together with a mortar and pestle, adding enough olive oil to create a loose sauce; store in a jar in the fridge for up to a week. (The gremolata will improve in flavour after a day or two.)

11 comments on “Grilled Steak with Gremolata and Warm Potato Salad”