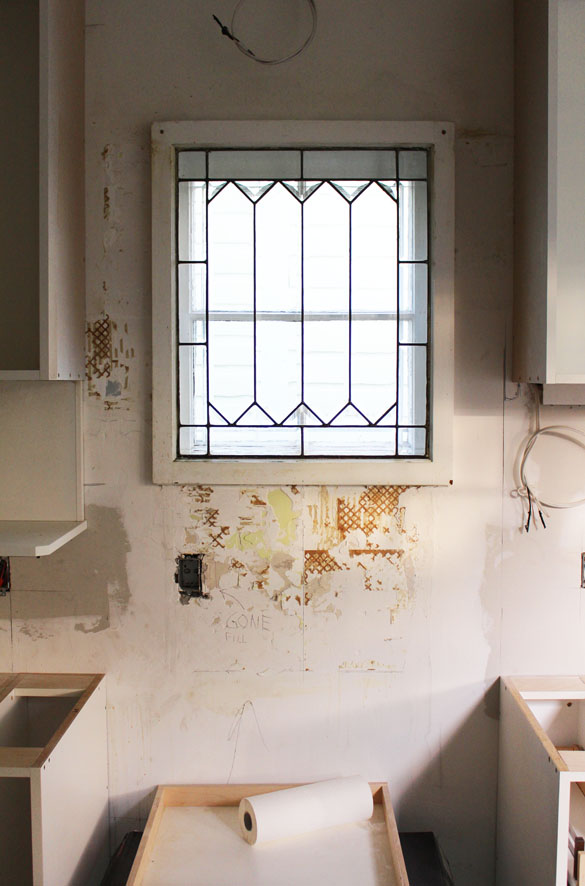 There’s a very good reason I haven’t updated you on the kitchen situation in a very long time: it’s moving at glacial speed. It’s mostly my fault – every time an obstacle pops up, shooting gallery-style, I employ my ignore it and it will go away tactic, and it hardly ever does. Sometimes, these obstacles cause the process to actually move backwards, like that time I took a random handful of paint chips in various shades of white down to my oven, which is still in the showroom, to match the colour, and picked the one that was closest, which it turns out was not remotely the same, and so when they sprayed the cabinet drawers and installed them, they were a shade of beige silly putty.

Who knew there were so many shades of white? I mean I thought I knew, but I didn’t really. And even when you do manage to choose a shade of polar bear/snowstorm/mashed potato that suits, once we get it into our kitchen it becomes obvious how reflections and sunlight and time of day can make it look different from one end of the room to the next, from one hour to the next, depending also on what paint colour happens to be beside it. Interior designers – I get it now. 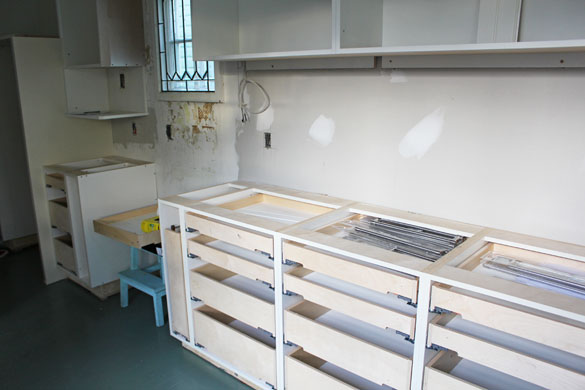 And so after much looking and agonizing and wondering if it was really that bad (it was) we got our cabinet maker to take them all off again, I got my mom to do a proper paint match (which took an entire day with its own frustrating ridiculousness) and because the aforementioned ridiculousness brought us to a Friday afternoon, the paint guys couldn’t mix the paint before our builder left for the west coast to go fishing for ten days. 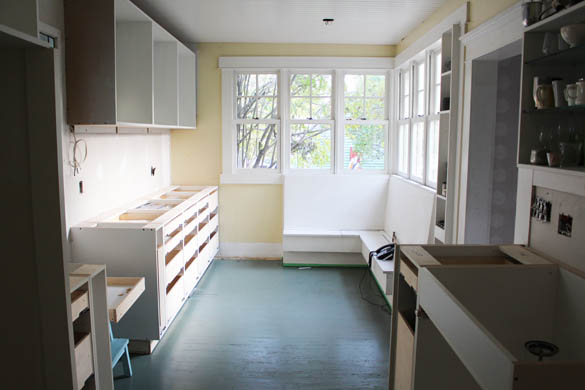 So the cupboards are once again bare. We painted the floor though, in a shade of blue-green-grey that seems to also chameleon depending on the time of day and year it is and what colour shoes you’re wearing. It seems to have worked out though – more people than not told us that there was no possible way we could paint a hardwood kitchen floor, but we found a type of paint that’s ultra-durable and contains some sort of glue compound that binds with the wood, and yet there was no skull and crossbones on the can. And so we steamed and scrubbed and sanded the floor and painted a coat (so that the colour will go under the bottom cabinet kicks) and will put on another when (if?) everything goes in. I kind of want to add a big stripe down one side. We’ll see. 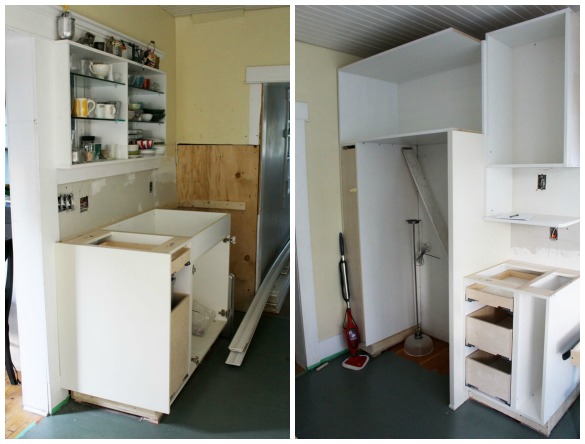 And the countertops have finally been templated! This is a good example of one hiccup causing a domino effect of delays: in this case the process was further put off by the kitchen sink I chose wound up being half an inch too big for the cabinet, which was built as we were discovering this fact, thus limiting our sink options to those without an apron front. Which isn’t really a big deal I realize, but having had a thick, white, farmhouse-style kitchen sink for so long, I couldn’t envision anything else, and so after failing to find anything resembling what was in my head that didn’t have an apron front, I retreated to a state of denial characterized by procrastination. And when Mike did force me out the door to look at plumbing galleries (not my idea of a good time) all the stainless ones were too utilitarian. And when I did find one I liked, it was $1900. For a kitchen sink. And all this time my mom suggested I get one custom made like she did by some metal guys she knows, which I thought was ridiculous considering how many thousands of kitchen sinks there are in showrooms and Home Depots and catalogs out there, but in the end I was wooed by the idea that I could give them exact specs, tell them just what I was looking for, and they’d build it for half what that other sink cost. Fortunately, my mom knows how to do technical drawings of this sort, and so she did, and the sink is beautiful. I’d take a picture, but the guy who came to do the templating took it with him – presumably to make sure the whole they cut in the Caesarstone was exactly the right size.

Speaking of the countertop: the new shade of white paint and the blue floor and white walls meant the original white countertop I chose one day on a whim when I didn’t fully understand the difference in kitchen whites no longer worked – so we picked the Caesarstone in cinder, which looks kind of like cement – neutral, but different. We’re now wondering what to do about a backsplash – more Caesarstone behind the sink? It might be too thick, and difficult to cut holes for the two plugins the electrician insisted had to be installed there according to electrical regulations (which seems weird to me, to put electric sockets right behind the sink, where the backsplash would be? clearly they’re in the splash zone…), and something for behind the oven, which by the way has an old reclaimed window we don’t want to get rid of (see the photo up top!), which means getting an overhead fan custom made – next on the to-do list. (Along with: NEW WEBSITE. Another story altogether.)

I had thought the kitchen would be done by Thanksgiving – now aiming for Christmas. Or maybe Halloween? In the meantime, we’re actually getting used to doing dishes in the bathtub…

29 comments on “Kitchen Reno: an Update”