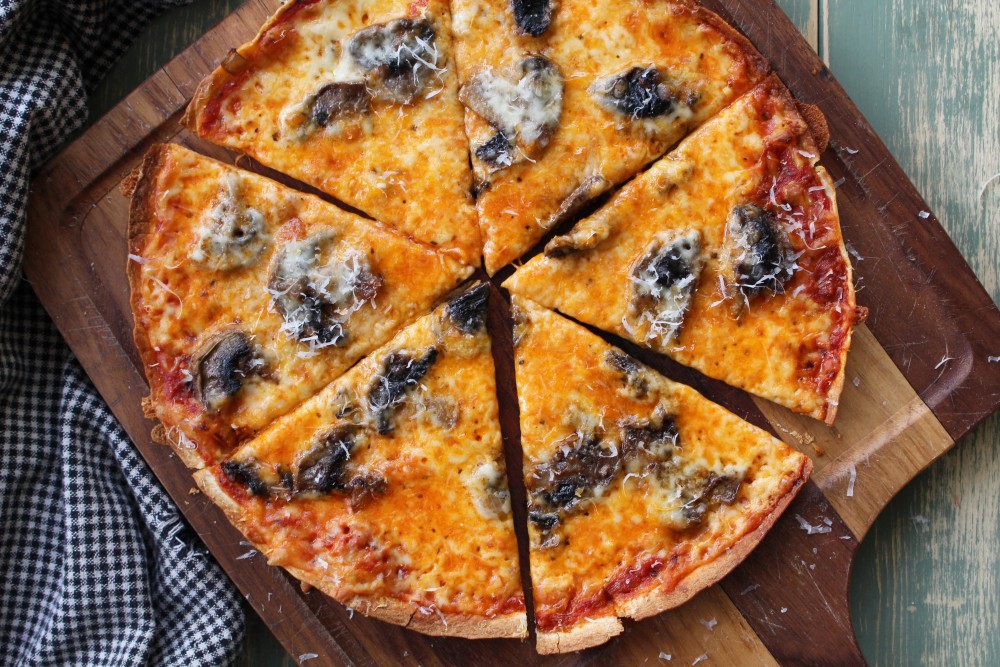 To be honest, I didn’t really have a clue what bar-style pizza was until I happened to see a tweet from Serious Eats, and I happened to be starving, and the tweet happened to have an embedded photo of an ultra thin-crusted, cheesy, crispy-edged pizza in it. So I deduced that a bar-style pizza was more appy-sized, with thin, small wedges that were more convenient to eat with a pint. Thin enough to maybe fold in half, like people do in movies set in New York.

I thought I had a handle on pizza – I have my go-to crust recipe that I know by heart and like to make a day ahead to give the dough a chance to develop some flavour. I occasionally swap in a batch of chewy no-knead bread dough. I toss it on the grill sometimes, and I know the cast iron pan trick, and I’m down with pita pizzas – a staple of our childhood birthday parties. It never occurred to me to venture beyond the realm of my existing pizza knowledge – or to use a flour tortilla, which is far too thin and floppy. Right? Nope. Look at that edge! The secret: cast iron. 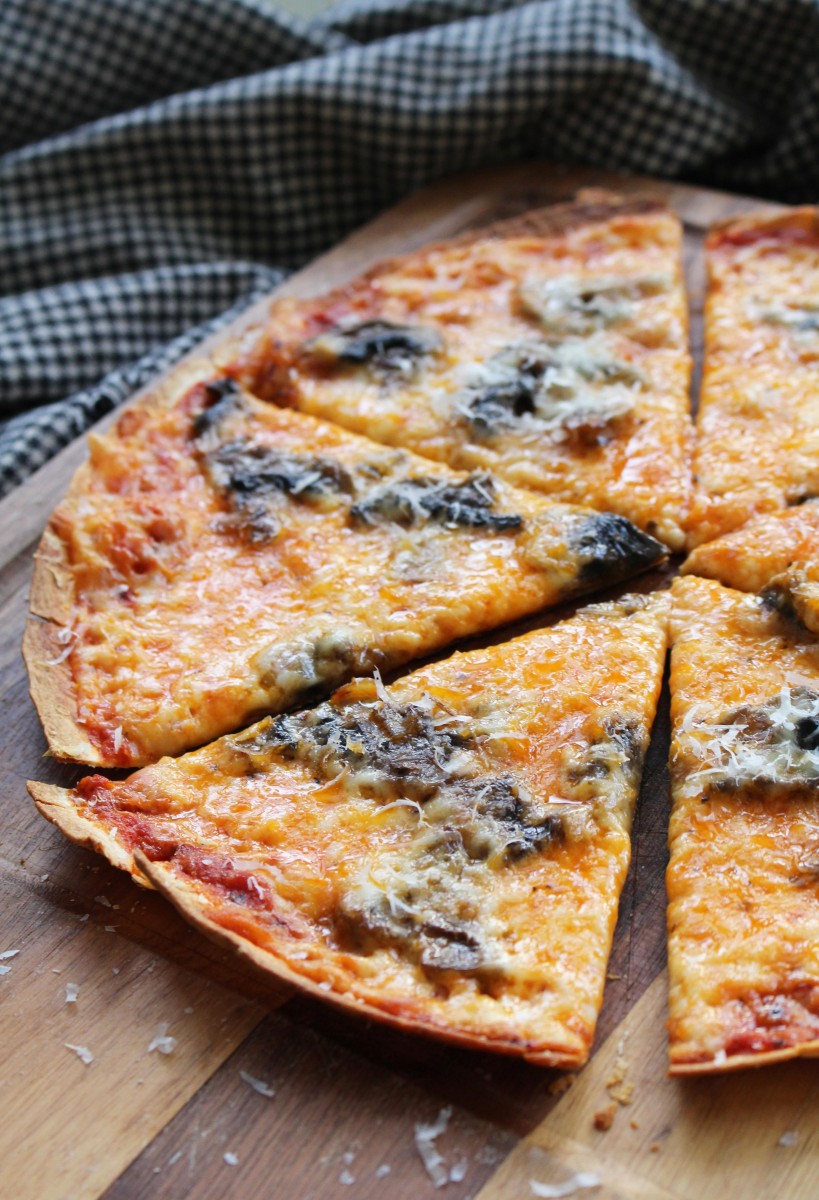 Serious Eats has a detailed recipe, and the Food Lab thoroughly walks you through the science of it, but I think with a pizza you can freestyle the toppings – it’s the tortilla + technique that’s so worth sharing.

So here’s the gist: set a cast iron skillet on the stovetop while you turn on the broiler. Add a drizzle of oil and wipe it around with a paper towel – I didn’t even bother with the paper towel, just swirled a bit around in a well-seasoned pan. Flop in a flour tortilla – they specify which side to put down, but I couldn’t tell a difference (there’s yet another post out there that illustrates it, but now I can’t find it) and spread on some sauce, going right to the edges. Sprinkle with grated mozzarella and Parmesan (again – right to the edges!) and whatever toppings you like – I happened to have some mushrooms sautéing in another pan for soup, so tossed a few on. 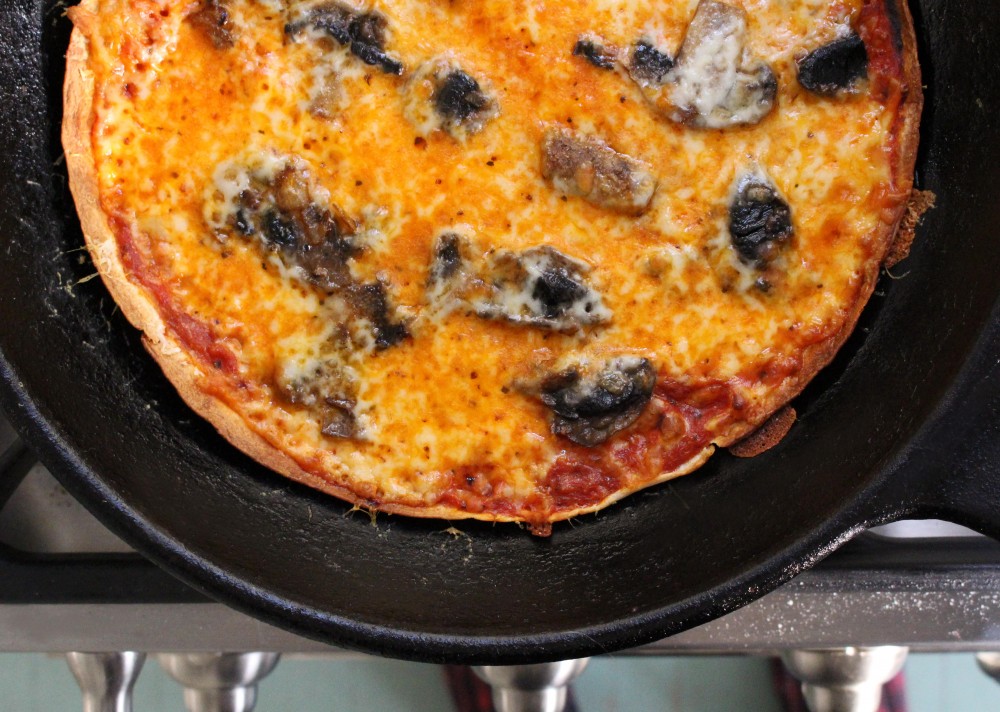 By now the bottom should be golden and crisp, and you can slide it under the broiler for a minute or two to melt the cheese. (And if your oven happens to already be on, that works too – no need to switch it to broil.) The resulting pizza has a perfectly crisp, cheesy edge and no soggy bottom – it will fold, but not flop. The bottom is toasty and structurally sound. 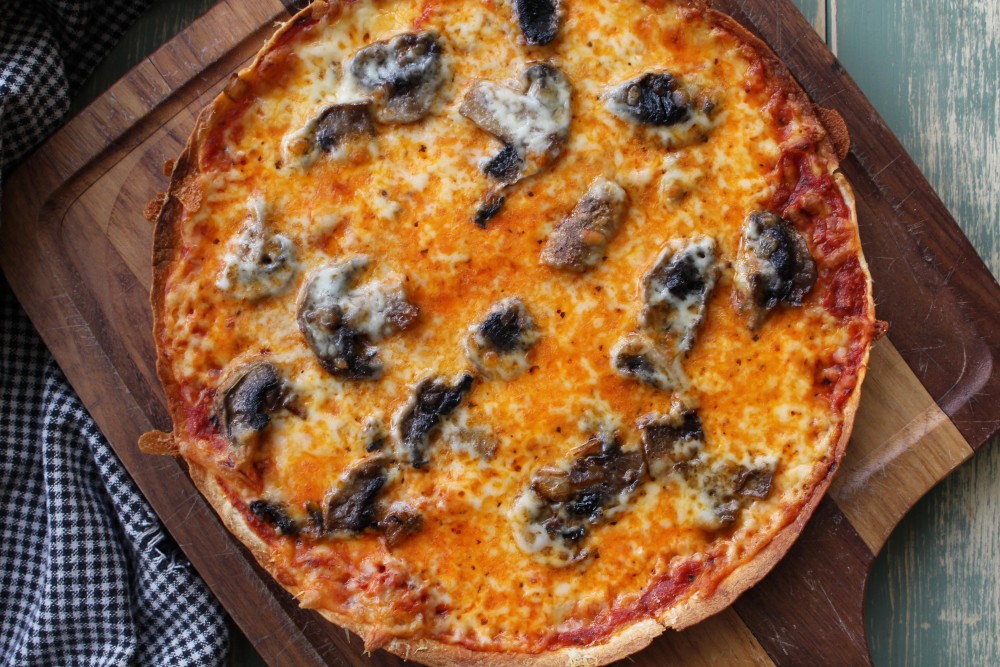 So there you go – pizza in under ten minutes. Far faster than frozen, and better (and SO much cheaper!) than takeout.