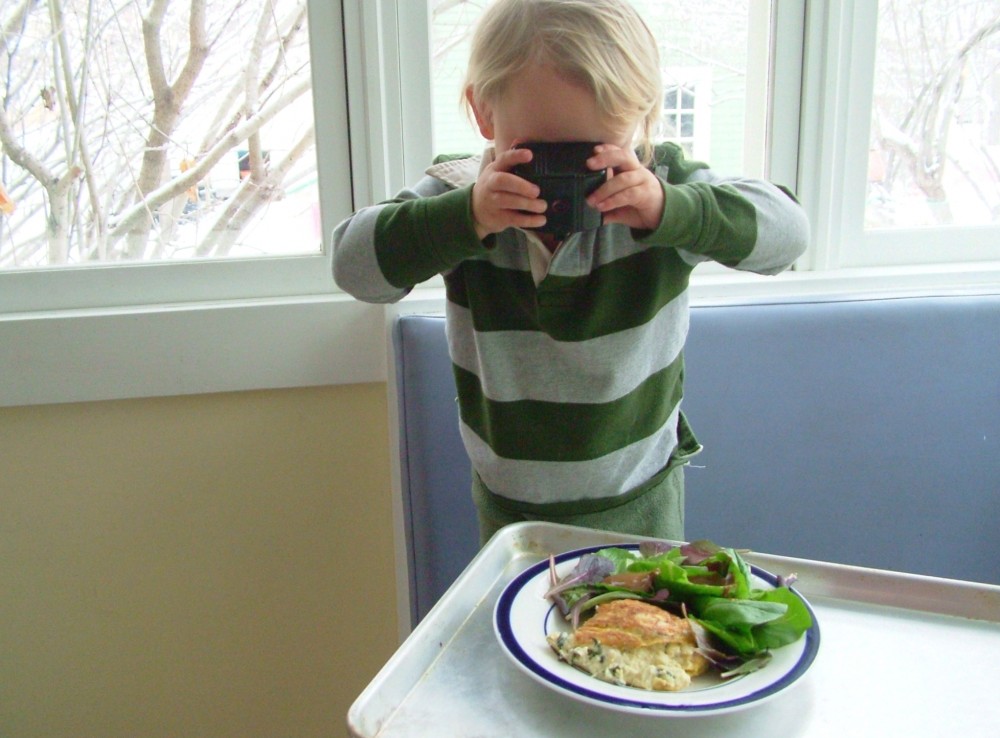 Remember this photo of W taking a picture (with an old camera that didn’t actually work) of his omelet? Sigh. It was my blog header of my blog for a long time – although the omelet was cut off and a lot of people couldn’t tell what the black box was. Anyway. I needed a photo here because you gotta have a photo, right? And it relates to taking pictures and writing recipes and the stuff I do around here.

Sometimes (oftentimes), people pay me to write stuff. Or to photograph stuff, come up with recipes, or make food look pretty so that other people can take pictures of it. This is a good thing, because I’m a professional food writer and the goal of any professional anything is to make a living doing that thing. Sometimes I get paid by magazine or newspaper editors (who get paid by advertisers) and sometimes I get paid cookbook royalties based on book sales and sometimes marketing boards or brands come directly to me to do things.

The professional part still sounds funny, even though it’s now my job – as many of you know, this is what I wanted to be even as a kid, when I wanted to be Elizabeth Baird. (I still do.) This was back when there were very few food writers, and many of them were ladies with tall hair who answered cooking questions in newspaper columns. Things have changed, obviously – the internet now exists, the playing field has flooded and food editor gigs at major magazines are rare, and still mostly take place in Toronto. And while I do (!!) have food writer/editor positions (at Parents Canada, and Western Living!) and columns, I write lots of things for different people, and get paid (or not) in different ways – but I love being here the most. And so sometimes – less often than not – when people ask me to use a product in a post and offer to pay me for it, I agree. A new recipe is better than an ad, right? (As a kid I used to cut out the Canadian Living ads that had recipes in them and put them in my scrapbook. I was a recipe nerd even then.) My favourite are the locally grown and raised ingredients – beef, pulses, cheese and the like, which I use on the regular anyway. You want me to make something with lentils? Oh, OKAY. I can do that.

I – along with a lot of people – have been struggling to find a good way to identify such posts. (See making a living as a food writer – a few thoughts I apparently had last spring.) A lot of people don’t like it when you announce a partnership at the bottom, and when you work it into the copy – “I teamed up with so and so” – it can sound forced and awkward, and I’m not sure everyone really understands what that means, and I know (I do it too) not everyone always reads the whole post anyway. So I’m going to try identifying them at the top with a bold announcement you can’t miss: Blog Flog! Because it’s fun, and that’s all this is meant to be.

Think of it as if you were watching Seinfeld on TV (I get to be Elaine) – remember when you had to wait for it, and it anchored your Thursday nights? – and a commercial comes on. Only it’s not an annoying commercial, it’s something that’s hopefully useful, that I wrote, only someone else paid me to do it. (Just like they do when I write for newspapers and magazines.) Which helps cover my (not insignificant) hosting and web guy fees, which helps me share things here.

Anyway, just wanted to explain the Blog Flog thing you’ll start to see sometimes, and ask what you think of it, because it’s really all about you guys. Truly. Thank you! Carry on.

My work here is done. (Sterling!!)

We connected over butter. I always knew we would.

It’s out!!! My butter story is in today’s Glob

Washing your homemade butter in cold water will wa

Earlier this week, an elderly gentleman called the