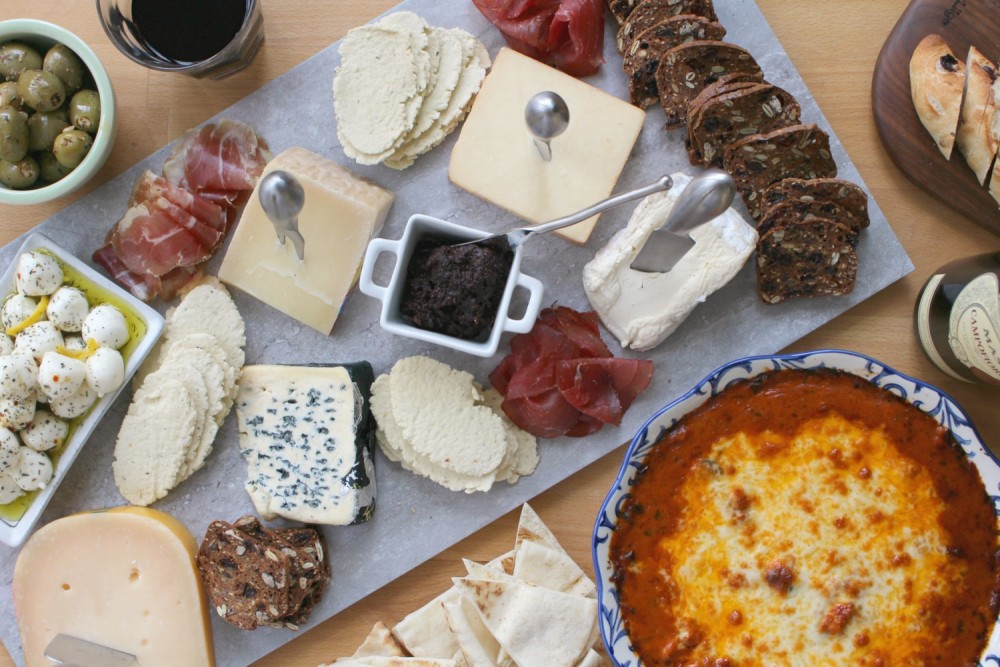 Somehow, it got to be November. For the past 14 years, I’ve spent this first week out in Jasper at Christmas in November, and I have to admit I’m going through some severe withdrawal. I made a list of things that have been hanging over my head for far too long to take care of with this time that would otherwise be spend driving/dancing/eating/spa-ing – organize the basement! organize the office! get teeth cleaned! sort out the garage while it’s still nice out! – but while I am making some progress, it wasn’t doing much to fill the hole left by the usual ten days of festivities. And so when I was asked if I might go pick up some things at Willow Park Village and make some party food out of it, I said hell yeah, immediately invited some friends over and went shopping.

Willow Park Village is a bit of a haul south for me, but I spent a lot of time there during the three seasons we filmed It’s Just Food in the Kitchen at Willow Park Wines & Spirits, and when I am down in that end of town I always pop in because I love the cheese shop, the seafood shop, the butcher shop, the cupcake shop, and my pal Judy Wood owns Meez, where they carry hard to find locally made products (and Lyle’s Golden Syrup in a tin!) and a buffalo chicken dip that will make you weep with joy. I love that you can park and walk between them all, and everyone is extraordinarily friendly and helpful. 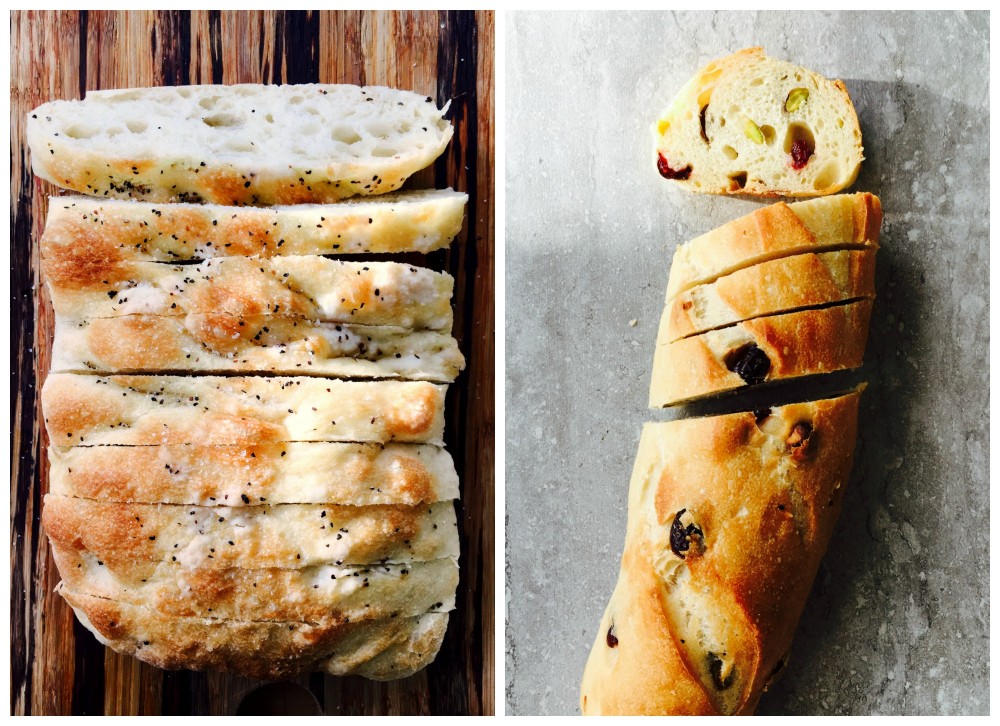 We slept in, stopped for coffee, then went to shop, starting at Cobs for cinnamon buns. My mom goes to Cobs quite a bit, and picks up this crazy delicious loaf packed with dried fruit. I grabbed one of those, not for the get-together but for toast the next morning – it was so warm, it steamed up the bag, and I nibbled it as we shopped.

I also picked up a cranberry-pistachio baguette, a few pizza crusts (I like tossing a few pizzas into the oven for the kids – although the grown-ups always wind up eating them too) and a chewy focaccia, topped with coarse salt. (In the past I’ve thinly sliced these to make grilled cheese, and sliced the long, thin sandwiches lengthwise diagonally or crosswise into gooey two-bite pieces and set them out right on the cutting board.) 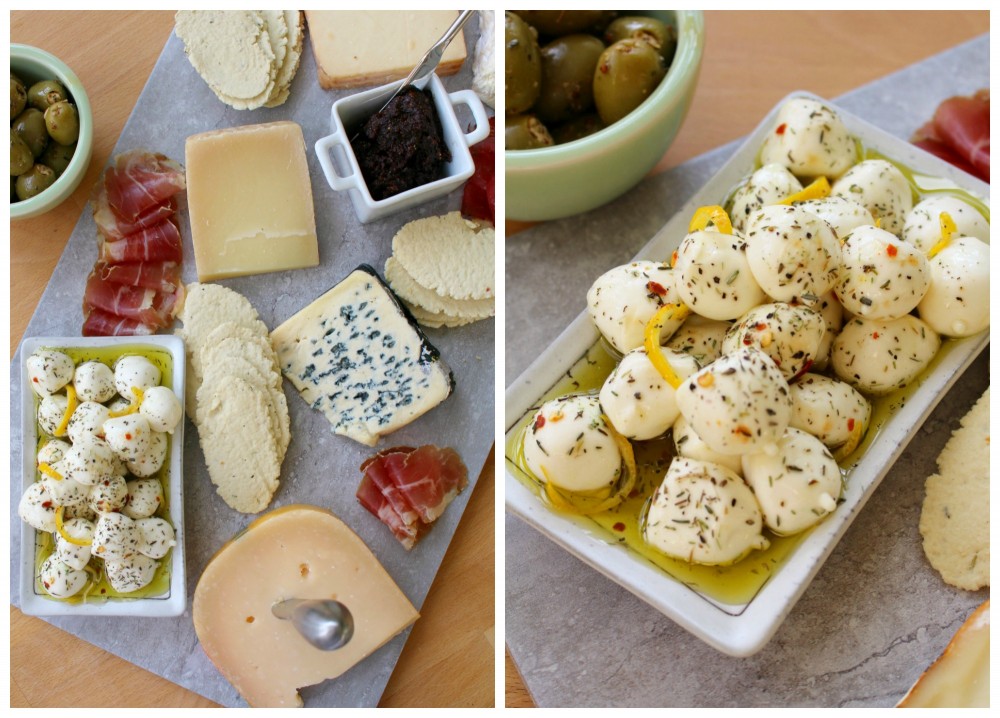 Next door, one of my favourite stops is Springbank Cheese, where Adrian & Carie Lee Watters carry over 365 types of cheese. They carry fresh curds for poutine, fresh mozzarella from White Gold, and Sylvan Star Gouda; they’re super knowledgeable, and are always sampling something tasty – I generally leave with something I hadn’t tried before. I picked up the above, plus some applewood cheddar, raclette, feta, a tub of Angela’s olives, a box of Raincoast Crisps (ADDICTED) and some Valbella prosciutto. I have a bunch of boards at home, but love using a kitchen tile to set cheese out on – they stay cool, and are easy to clean. I pick them up for a couple dollars at Home Depot and put a couple felt pads on the bottom to keep them from scratching the table. Cheese is wonderfully low-maintenance, and everyone loves it – the only thing I did was add a glug of olive oil, a few strips of lemon zest, a pinch of thyme and red chili flakes to the baby mozzarellas. I grabbed a jar of rosemary-fig jam made by CRMR and some thinly sliced cured bison at Second to None to fill in the gaps. 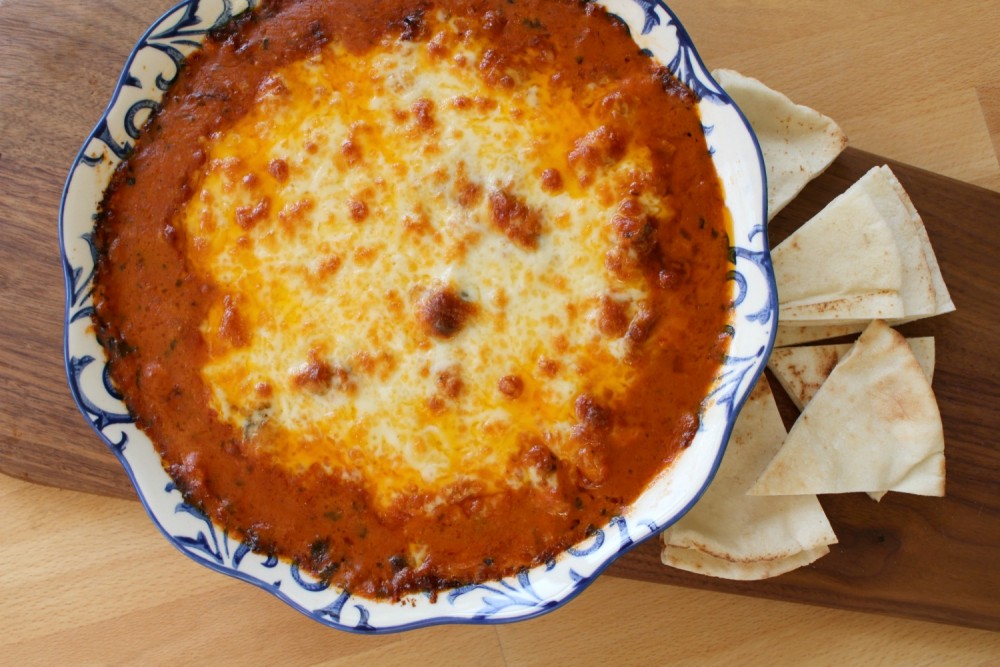 Ah! And some aged white cheddar to scatter overtop a wide dish of butter chicken dip. Butter chicken dip! Which is really just saucy butter chicken (with the chicken – from Second to None – finely chopped), baked under a layer of cheese, and scooped up with wedges of pita or naan. All anyone really wants is the sauce, right?

I used more of the aged cheddar and Gouda for a quick batch of gougères – choux pastry with 2 cups of grated cheese stirred in, then dropped by the spoonful onto a baking sheet and baked at 375F for 20 minutes, until puffed and golden. And another standby – raw, tail-on shrimp from North Sea Fish Market, wrapped in a thin slice of prosciutto and quickly cooked in a hot skillet, then served with jarred pesto for dipping. 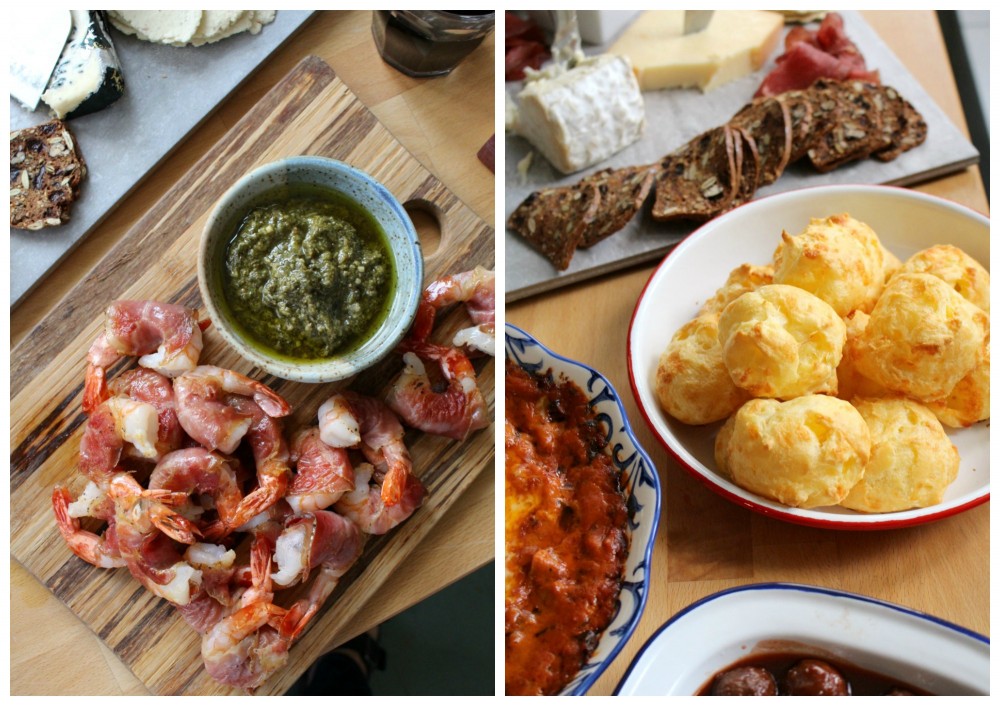 We got home at around 2:30, and by the time we got settled and the groceries unpacked, the beer and wine in the fridge, I didn’t actually start cooking until 3. Everyone came over at 5. Everything was made/assembled/laid out in under 2 hours – a holiday party does not have to require days in the kitchen. In fact, I kind of like everything being made in real time, not taking over (and overflowing) my fridge for the days leading up to a party. 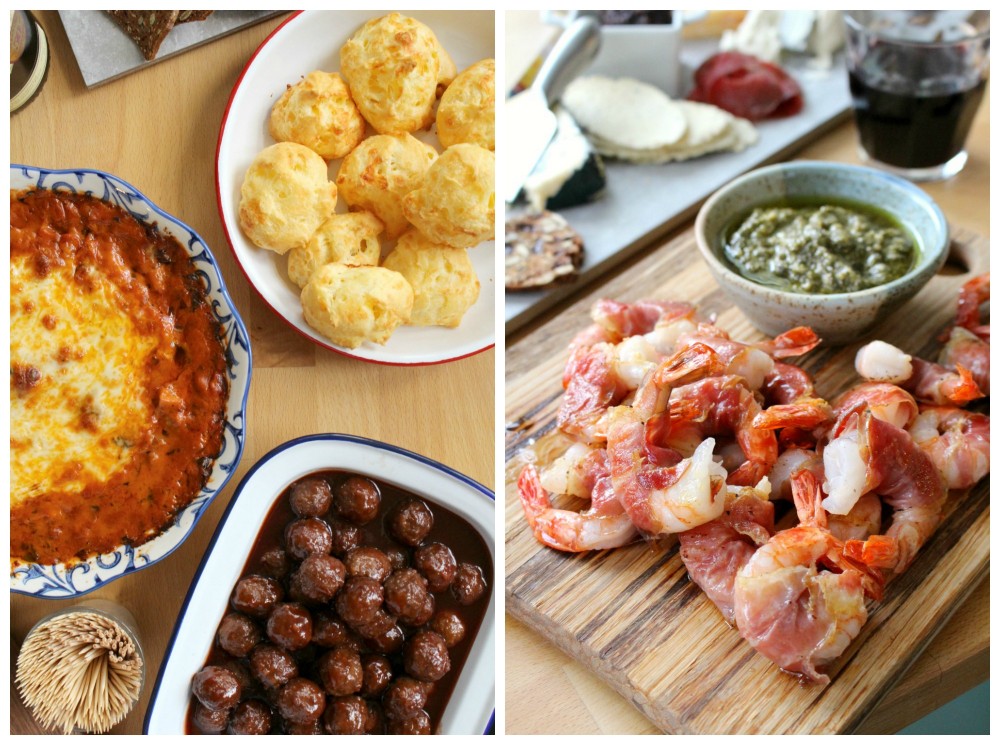 At this time of year we default to some dishes we’ve been making for as long as I can remember, one of them being those jelly meatballs that appear in just about every community cookbook. We attempted homemade meatballs a few times, but they tend to be more fragile, and were never quite the same as the small, compact frozen meatballs that are so easy to upend into a saucepan and heat through with equal parts ketchup and grape jelly, and a splash of lemon juice. And so we grabbed a bag from M&M Meats! We also picked up some lamb merguez sausage from Second to None and made sausage rolls – unroll a sheet of thawed puff pastry, lie a couple sausages along one side, brush with a little beaten egg, roll to enclose the sausage and slice off – this piece did three long rolls, which I brushed again with egg, cut into 1-inch pieces and baked at 375F for 20 minutes, until golden. So simple. 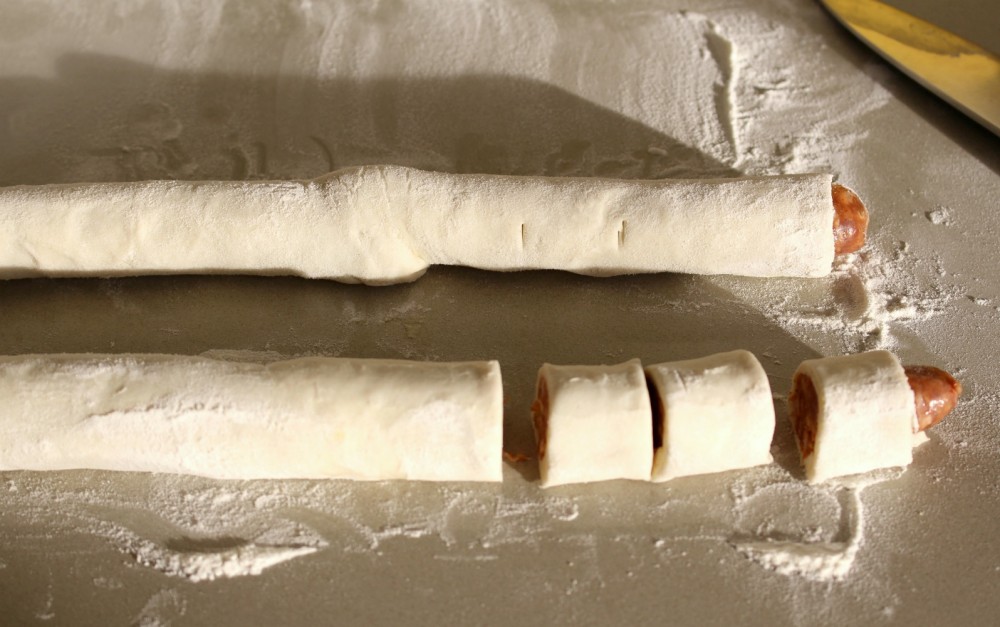 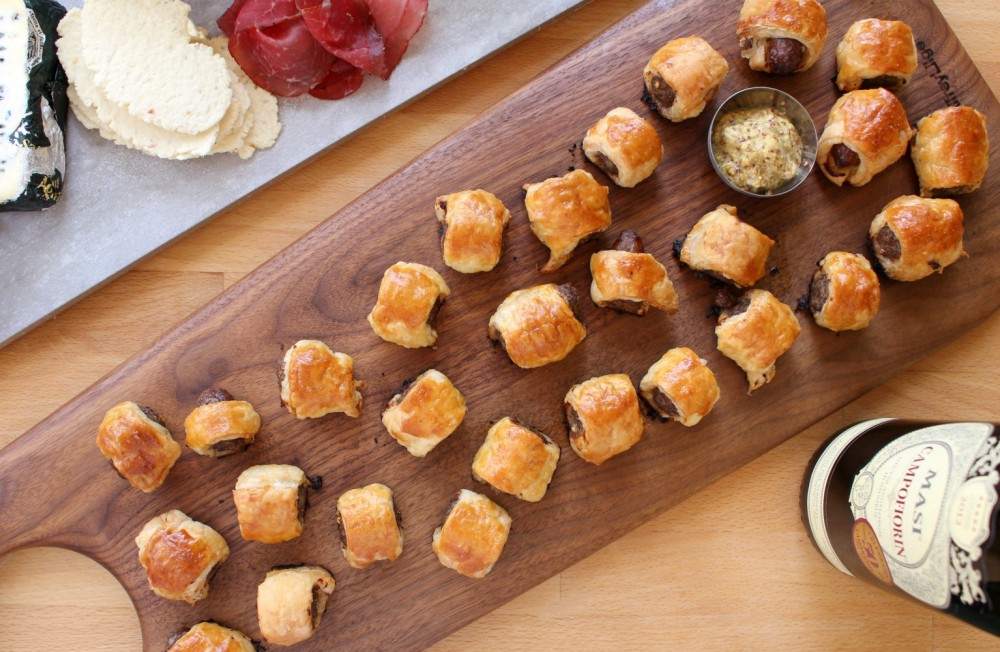 And for dessert, Nanaimo bars, natch. There’s no shame in buying them – I cut them into smaller pieces, for those who don’t want to commit to a bigger bar. (And it’s easier this way to nibble more over the course of the night.) 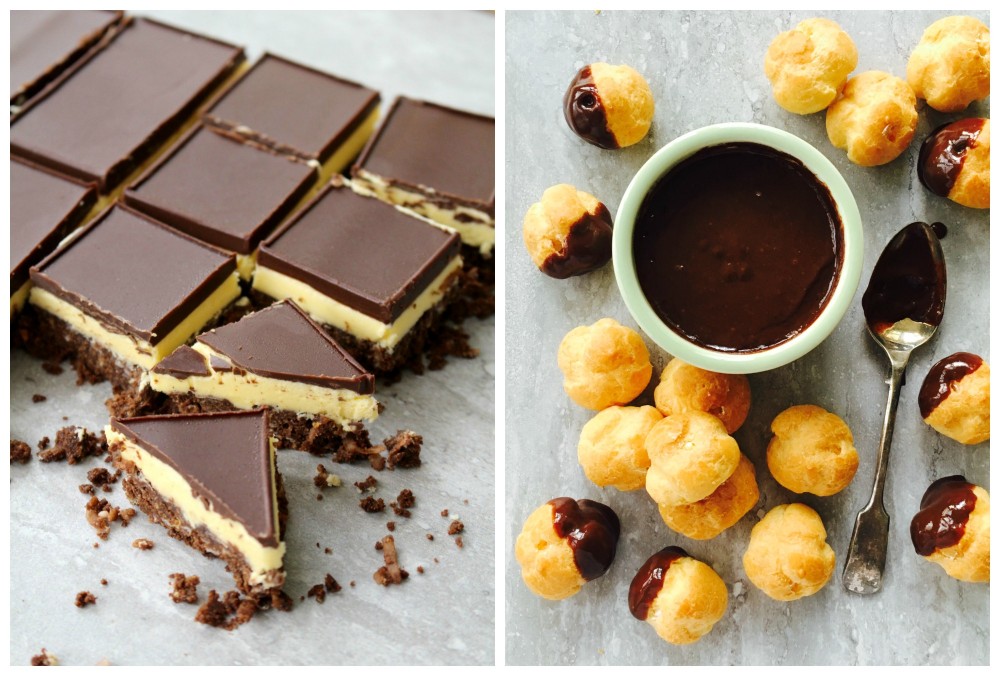 Another childhood fave – those frozen mini cream puffs, which you can also grab at M&M, served with a bowl of chocolate ganache for dipping. They’re also perfect with chocolate fondue, alongside fruit, marshmallows and chunks of dense cake.

It’s time. Let’s gather and celebrate each other, and all we have.

Big thanks to Willow Park Village for inspiring this wonderful evening with friends, and helping Dinner with Julie keep the lights on.