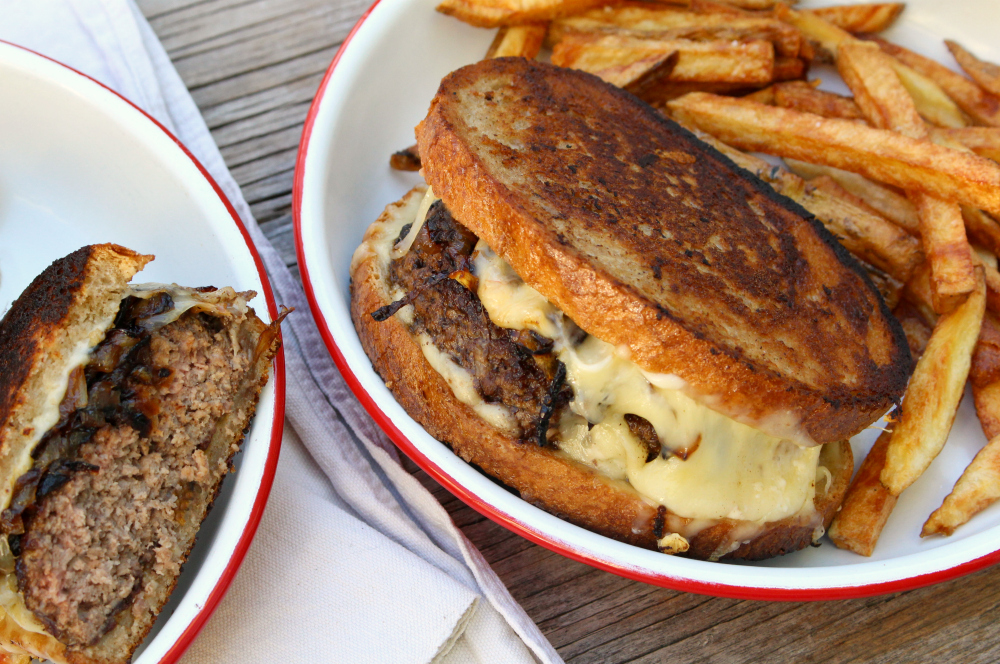 I partnered with Jarlsberg to bring you this cheesy goodness.

I’ve seen mention of patty melts here and there, and each time I see one I wonder why it is not number one on my all-time favourite foods list. A mash-up (truly) of grilled cheese and burger – two of my favourite things, yet mysteriously missing from restaurant menus (at least in my vicinity), and not something I’ve clued in on enough to attempt to make of my own accord. I’ve been meaning to rectify that, and Jarlsberg came along and gave me reason to finally jump in. 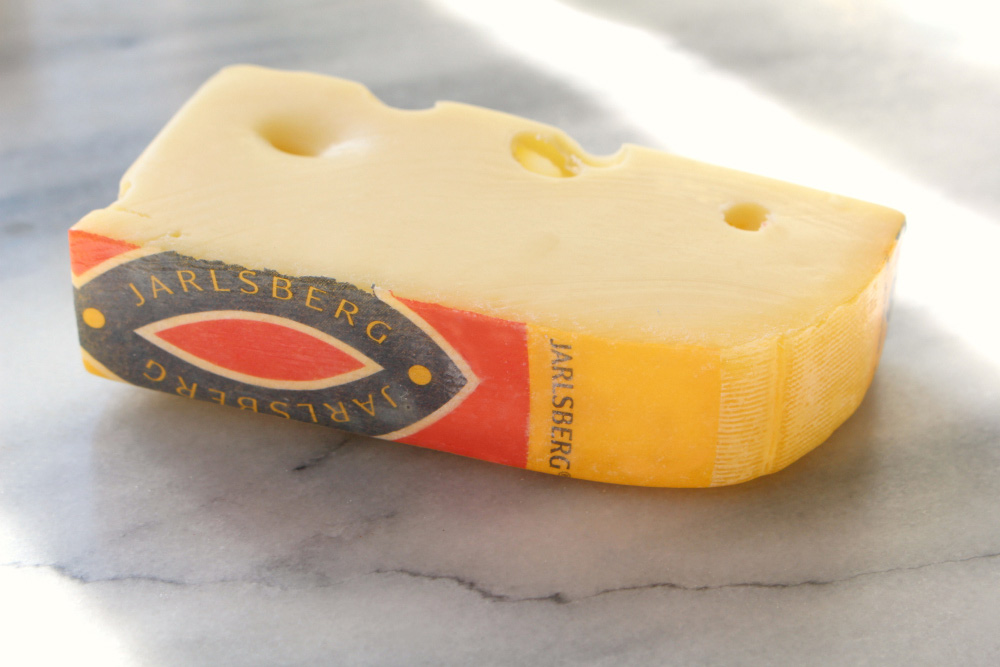 A patty melt, if you’re unfamiliar, is an American thing – I’m not sure of its origins, but won’t bother Wikipedia-ing it because it doesn’t much matter – all that matters is that onions are caramelized, a burger patty is smash-cooked in your skillet afterward, and it’s all piled between two slices of bread (to make it grillable) with plenty of meltable cheese to glue the whole thing together. Jarlsberg is about as melty-gooey as they get, with a mild, buttery, nutty flavour that goes so well with the beef and onions. I stuck with the traditional rye bread, not wanting to stray too far on my first try, but you could use just about any good-quality, sturdy loaf you like. (You just don’t want the slices to be unmanageably big, or for the insides to have too many holes.) 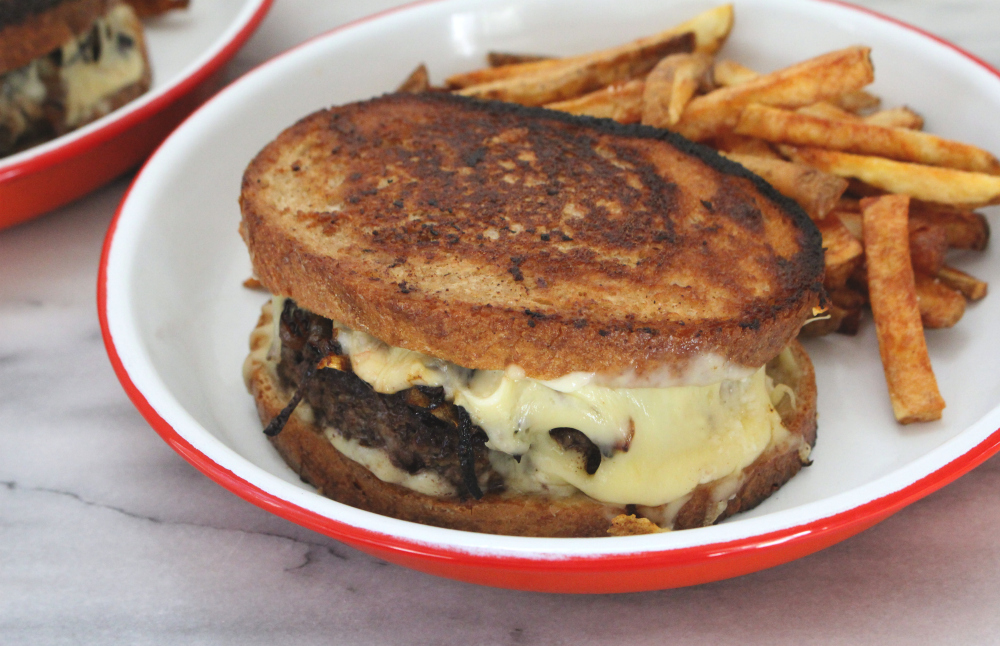 Can I walk you through it, instead of laying out a recipe? Because you don’t need precise measurements and instructions any more than you would for a grilled cheese sandwich.

Let me walk you through it. Thinly slice an onion or two and cook them in a skillet with a bit of butter or oil, stirring them often, until they turn ultra soft and golden. It should take about 20 minutes. Take them out of the pan and cook as many burgers as there are people to feed. One pound of ground beef is enough for about three. I don’t do anything to the meat but take it out of the package and gently shape it into patties – there’s no need to add flavourings or binding agents, like you would with meatballs or a meatloaf. Sprinkle them with salt and pepper, add a bit more butter or oil to the skillet and cook them for a few minutes per side. They can stay on the pink side – they’ll heat through even more when you griddle them in their cheesy packages. 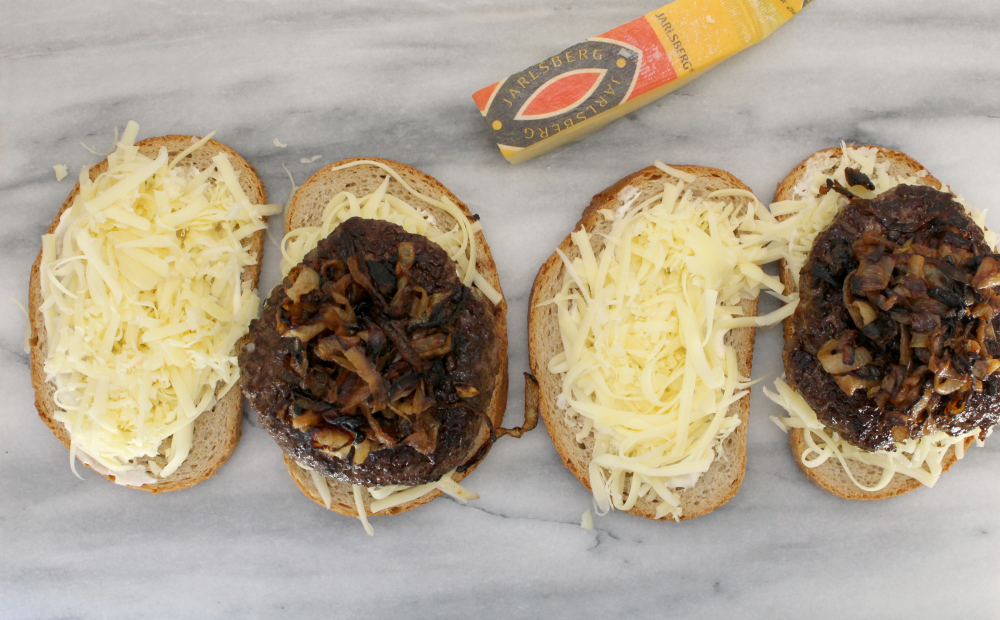 While they’re cooking, lay out your slices of bread, as if you were making grilled cheese sandwiches. Spread them with a bit of mustard or mayo on the inside, if you like, and then load them up with Jarlsberg – I like to coarsely grate it, which makes it easier to distribute and melt more evenly. Set a burger patty on half the slices of bread, and top each with onions. (Yes, mine got a little dark – I like them that way.) Try to do thinner patties than these – W shaped them, and I didn’t want to correct him by making them thinner – they’ll just be easier to handle in a sandwich-type situation when they’re thinner and flatter. You can make them about the size of the bread you chose.

Spread the tops with soft butter or mayo (which is easy to spread and makes a fine grilled cheese or patty melt exterior) – or you may need nothing at all if there are still beef drippings in your skillet. Set the sandwiches mayo-side-down in the skillet, keeping it at medium or lower, and spread a bit more butter or mayo on the top slices. You’re just making grilled cheese sandwiches, see? They just happen to have a burger and caramelized onions squished in between all that cheese. Cook them as you would grilled cheese, until the cheese melts and the burger is cooked through to your liking. If it’s cooking too quickly on the outside and not heating through, cover it with a lid or piece of foil to trap the heat for a few minutes. 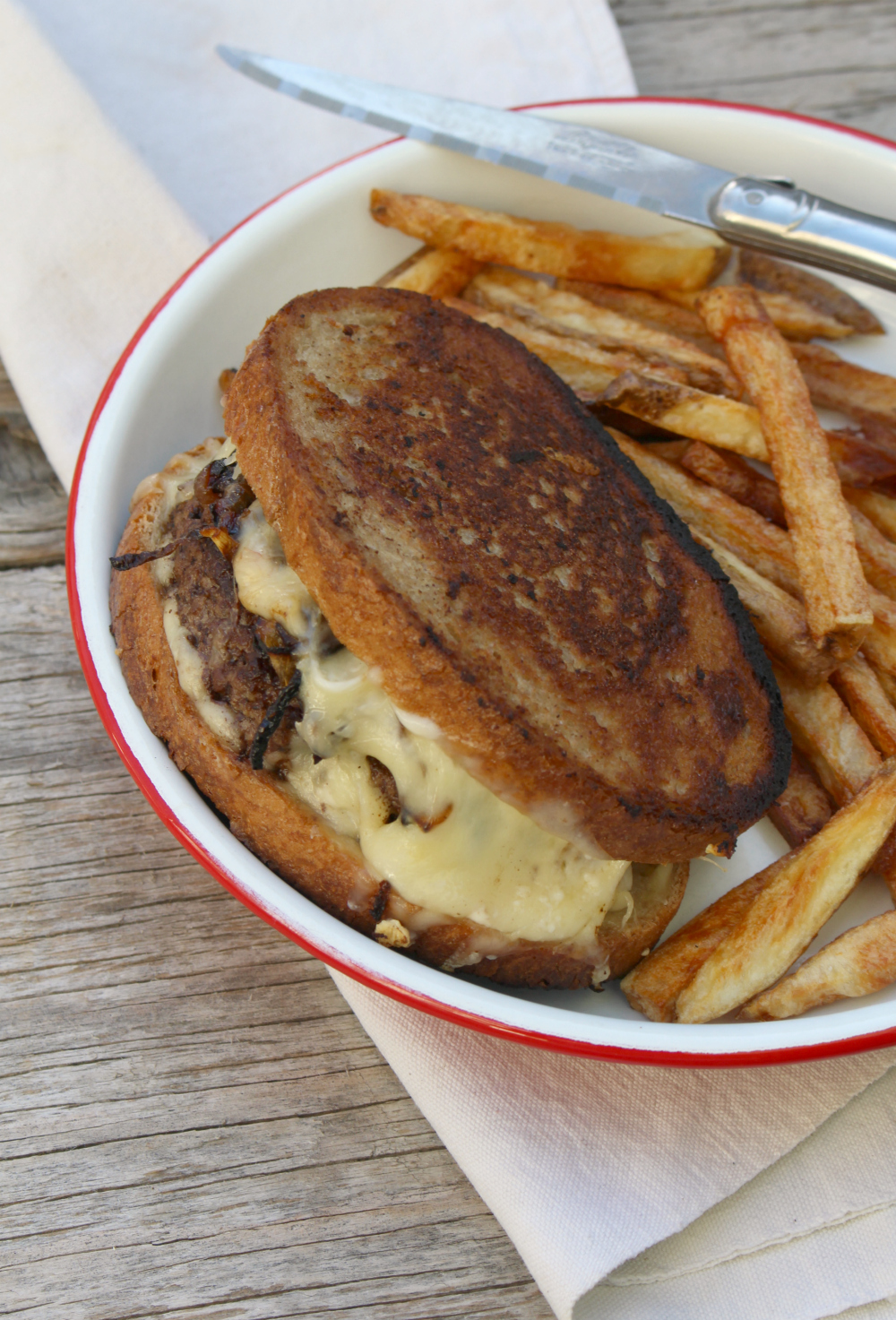 This is one of those things that could easily make it into regular rotation at our house; with some ground beef or bison in the freezer and a chunk of Jarlsberg in the fridge, it makes for a quick and ridiculously tasty dinner, particularly when there are hungry teenagers around. I’m already imagining a turkey version, with patties made with ground turkey, cranberry sauce spread inside the sandwiches, and that gooey, nutty Jarlsberg holding it all together.