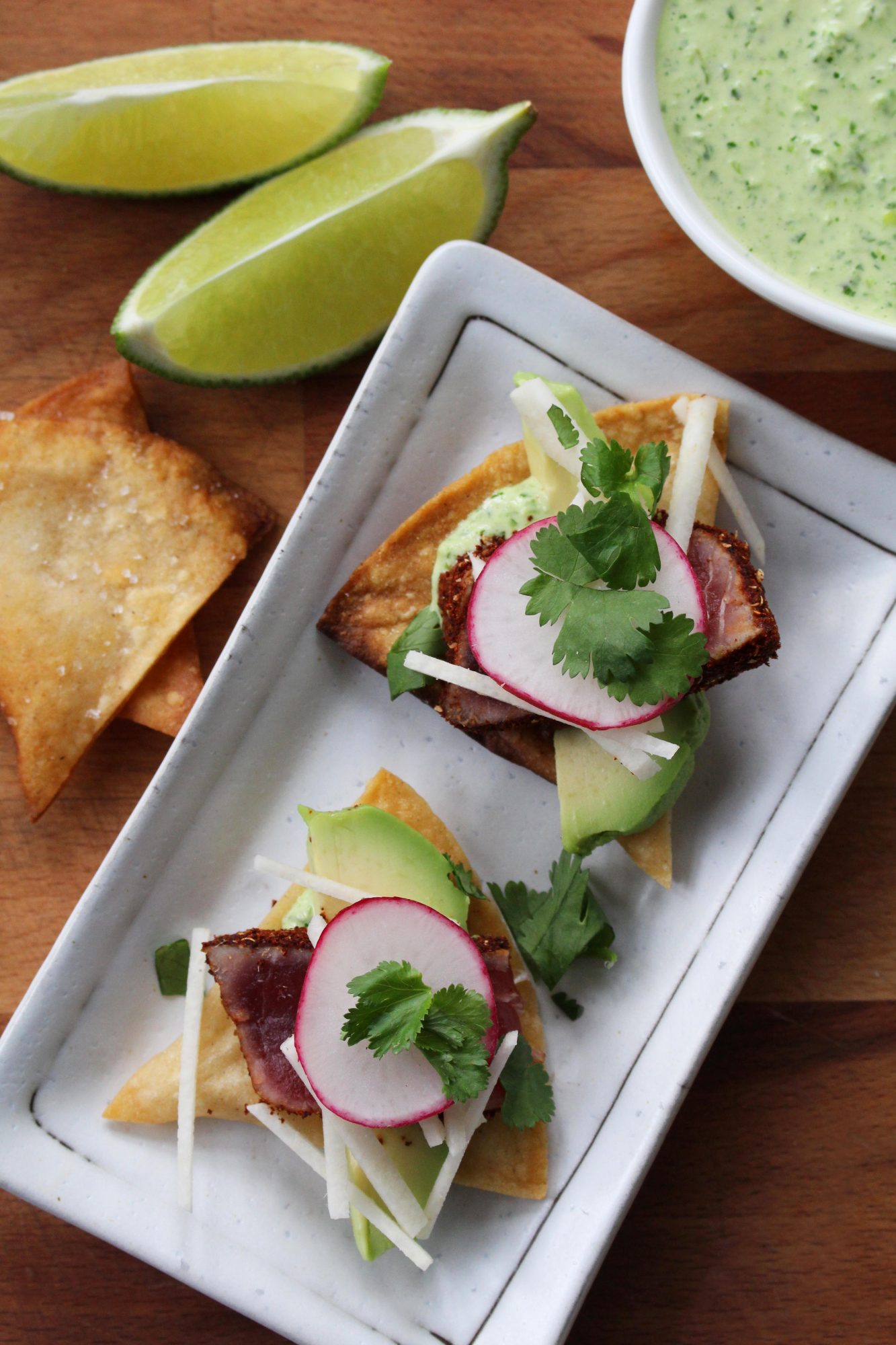 Roast the jalapeño and poblano peppers over high heat until the skin sides are fully charred. Using a sharp knife, cut them in half and remove the seeds and stems.

Add the peppers, garlic, salt, olive oil and cilantro to the blender and puree until smooth. Add the puree to the mayonnaise and stir until evenly combined. (Shortcut: If fresh peppers aren’t available, use a green jalapeño sauce such as Tabasco, or even some salsa verde.)

In a mixing bowl, whisk all the ingredients together until thoroughly combined. (Shortcut: substitute the spice rub with a pre-made Cajun spice mix.)

Cut the tuna loin in half lengthwise, then cut the halves into roughly 2-inch pieces.

Blanch each piece of tuna in boiling water for about 10 seconds, until the outside turns white. Then immediately transfer it to an ice bath. After about a minute, dab the tuna with a paper towel to remove excess moisture, then move it to the spice rub. Roll the tuna in the rub until thoroughly coated, then place it in the fridge.

Whisk the lime juice, fish sauce and sugar together until all the sugar is dissolved. Use either a mandolin or a vegetable peeler to finely slice the jicama, then julienne it with a sharp knife. Add the jicama to the lime mixture and store in the refrigerator for later use.

Cut the tortillas into quarters. Submerge the quarters in the deep fryer for 10-15 seconds before stirring with tongs. Cook until the pieces float and become crispy - approximately 2 minutes. Drain briefly, then toss in a bowl with seasoning. Shortcut: If you like, substitute store-bought tortilla chips for the fried tortillas.

Top each tostada with a dollop of the aioli, a thin slice of avocado, a slice of the spice-rubbed tuna, and a pinch of the lime-marinated jicama slaw. Garnish with a slice of radish, a couple sprigs of cilantro, and a slice of Fresno chili. Serve with lime pieces on the side.