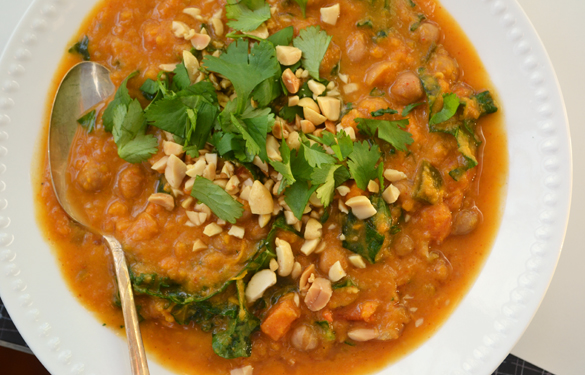 To go the slow cooker route, toss everything except the kale into the bowl of a slow cooker, cover and cook on low for about 6 hours. Uncover and stir, breaking up some of the chunks of sweet potato with the back of a spoon. If you like, stir in a handful of thinly sliced kale, chard or spinach, then put the lid back on for a minute or two, until it wilts. To make it on the stovetop, heat a slick of oil in a large pot and cook the onions for a few minutes, until soft. Add the jalapeño, garlic and ginger and cook for another couple minutes, then add the spices for a minute, and then everything else except the kale. Bring to a simmer and cook for 20-30 minutes, until the veggies are very soft. Stir in the kale and cook until it wilts.

Serve topped with yogurt or peanuts or cilantro, or all of the above.