Occasionally it occurs to me that I don’t make Toad in the Hole often enough. Ever, really. If you’re not familiar with it, it’s essentially a pan of baked sausages into which you’ve poured a Dutch baby or Yorkshire pudding-like batter in the middle of cooking, when the pan gets really hot and the sausages are half done. It’s about as easy as dinner gets, and as you can imagine, it would be as well suited to breakfast or brunch… you could, in fact, top it with fried eggs and splatter it with hollandaise and bring the whole pan to the table to feed everyone.

Hey, who loves cheese puffs? I’ve partnered up again with the Egg Farmers of Canada to make a video tutorial on how to make cheesy, eggy gougères for their EggcentricTV app, as part of their new spring recipe collection. Gougères are light, airy puffs traditionally made with gruyère, but I find aged Gouda a pretty amazing alternate. Gougères are fantastic for spring get-togethers – they’re great for nibbling any time of the year, particularly when there’s wine involved, but seem particularly well-suited to spring gatherings, and just as fitting for brunch as cocktails on the patio, if you’re lucky enough to be rid of the snow. If not, mix up a batch of these, open a bottle of wine and hunker down.

A few weekends ago the family gathered for brunch, and my brother in law brought a quiche. It wasn’t a frittata, but it didn’t have a pastry crust either – its base was made of hash browns. Brilliance! Eggs and veggies and cheese nested in grated potato, baked and served in wedges. His was asparagus and goat cheese and we devoured it all, and then I went home and made one, just to see. So simple! You grate a potato or two on the coarse side of a box grater, then get it started in a hot skillet, crisping up the bottom, before filling it and sliding it into the oven. You work in a little extra in the way of vegetables, but it’s still starchy – and perfect for people who can’t have pastry. Genius.

I realize it’s Monday morning and you’ve likely started the day with something practical, like steel-cut oats, having got all the bacon and whatnot out of your system over the weekend. But we all dream of sleeping in and lounging over brunch, right? It helps to have that golden beacon shining from the end of the week. I seem to be in Easter mode early this year – perhaps because it hasn’t snowed since the day W received his much-coveted snow tube in the mail sometime mid-January (it still sits sadly in the front hall, unused) – and maybe because Easter arrives so early. Two weeks! Easter or not, the warm and suddenly longer days jolt me into brunch mode – and although most weekend mornings I like to spend extra time in the kitchen baking something to nibble with coffee, this past weekend there were more crammed around our little table in the kitchen (even though I (finally!) managed to clear some surface areaContinue reading

I fear this blog is becoming my excuse for making carb-heavy weekend breakfasts on a weekly basis. This time, though, my excuse was a quickly hardening crusty loaf that took up altogether too much real estate on the countertop, and there wasn’t even room for a bun in the freezer. My neighbour had been chatting her overnight French toast up on Facebook, and thus the seed was planted. (Aside: I also appear to be stockpiling frozen blueberries, for all those smoothies I haven’t been making lately.) I baked this the day before we left for Seattle, and brought a bowl of leftovers cold with us when we left the house before dawn, eating it in the car in the Tim Horton’s drive-thru in lieu of take-out. Essentially this is less-sweet bread pudding; the fact that the bread is torn or cut into chunks before soaking in an eggy bath classifies it as such. Not that it matters. What’s in a name? If you want itContinue reading 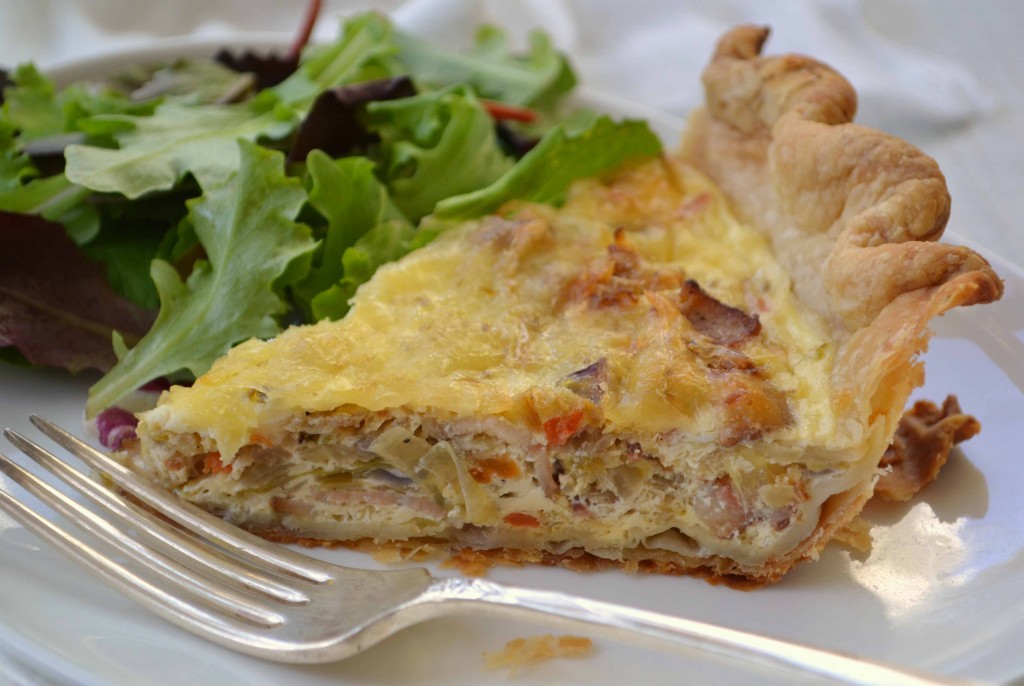 Wait – don’t go. Hear me out. Last week I made a resolution to use the food I have in my kitchen, rather than go shop for more, deciding what’s for dinner depending on my mood or the (near-constant) desire to try something new. I go for milk and eggs and come home with bags full of whatever was inspiring or on sale at the time, and then can hardly cram it into my cupboards and freezer. I think this is pretty typical, considering the fact that walk-in pantries and chest freezers are standard issue in most houses. I hear a lot of people refer fondly to their fridges as that place produce goes to die. And it’s true – in North America (Canada very much included) it’s estimated that we throw out 40-50% of the food we buy. Half! Can you imagine the spending on groceries that takes place across the country on a daily basis? And that half of those purchases are tossedContinue reading

I’m back to my McGyvering ways, this time orchestrating a meal around two leeks that I did not want to compost. I tend to get stuck at potato soup when I come across a leek, but this time the sight of them triggered the memory or a recipe I had set aside. I found it. I had Gouda! I had bacon! I started to make it, cooking the bacon, then the sliced leeks, until crispy, thinking it was essentially a frittata, wondering why it was called a pancake and why I had set it aside, anyway. Then I noticed the flour in the batter – ah yes, a pancake. A light, eggy pancake, something similar to those puffed apple pancakes, only savoury. Exactly the sort of thing I’d file away in my mental card catalog.

Have I shown off my garden yet? I’m loaded – with spinach and chard, that is – between the CSA box and the boxes in my back yard, I should have X-ray vision or some such superpower by the end of the summer. Which is coming up all too quickly. I punched “chard” into the search box on Epicurious the other day, looking for more inspiration (but really just procrastinating), and these frittata bites jumped out – they suggest cold squares for a cocktail party. I wound up doing my own thing, but kept the sausage-chard-feta combo, and it was loved by all. (Except W, who struggled unsuccessfully to separate the green stuff from the rest.) Bonus: two huge bunches of chard went into this – it always amazes me how small it gets once it wilts. You could cook a bunch down to a spoonful and just eat it, like a real-food vitamin pill. One Year Ago: Browned-Butter Blueberry Muffins (made with saskatoons)

Have you ever panicked that there is just so much food and so little time? I do. Frequently. I remember the first time I felt a pang of THERE IS JUST SO MUCH TO EAT AND ONLY SO MANY DAYS IN A WEEK AND HOURS IN A DAY! AND MONTHS IN A YEAR! EVERY DAY I HAVE TO DECIDE! I’M NOT GOING TO HAVE TIME TO EAT IT ALL! THE MATH JUST DOESN’T ADD UP! – it was triggered by a coconut cream pie. So now every time I get overwhelmed by the food possibilities out there (eating in and out), or unreasonably angry that I’ve wasted valuable space and calories on something that was not all it should be, I think of coconut cream pie. OK, not really every time. But sometimes I have my coconut cream pie moments. I get this feeling a lot when I get sucked into the vortex of food blogs – skipping from one to the next, bookmarking stuffContinue reading