I woke up yesterday morning thinking about macaroons. As one does. (You know the difference between macaroons and macarons, right? Macaroons are those chewy mounds of coconut and sugar, bound together by egg whites. Macarons are those fancy $2-per-pop French filled sandwich cookies made with ground almonds.) Macaroons and chocolate are pals – as a kid, I’d beg my mom to buy those Ruffles, which would last approximately five minutes in our house. I realize there aren’t a whole lot of Easter recipes on this site, and it occurred to me that macaroons come with an added holiday bonus: when pressed into tart shells, they resemble nests. And that little space in the middle provides an ideal chocolate delivery service. AmIright?

I made these last weekend, when we were invited over at the last minute to have dinner in our friends’ back yard. I wanted to make a pie, but there wasn’t time – and my crammed freezer had half a package of frozen tart shells left over from something or other that I kept having to move so I could close it, so I decided to solve two problems at once. Most berries are sweetened and thickened with sugar and flour or cornstarch before being baked in a pie; in this case, the tart shells get a quick 10 or so minutes in the oven to get toasty while you simmer some berries on the stovetop with those same ingredients, reserving half the berries to stir in at the end so that they burst and pop and retain their juice. You then satisfyingly spoon the berry filling into the tart shells, and you’re done.

It’s Canada Day Eve! Which means, traditionally, I’m baking butter tarts. This year I decided to make bacon butter tarts. Maple bacon butter tarts, even. I know, it’s been said that bacon has jumped the shark. But this makes sense – salty bacon with sweet maple syrup and brown sugar – this is a perfect fit, and oh so Canadian. I’ll be bringing a large batch to our friend’s annual Canada Day party tomorrow. If the reaction at the CBC studio this morning was any indication, they’ll go fast. A few ways to up the bacon ante: replace some of the fat in the pastry with chilled bacon drippings, or drizzle some into the filling in place of some of the melted butter. Although I usually default to my grandma’s butter tart recipe, I decided to use the one from the Five Roses Cookbook, which I recently learned was on the shelf in 650,000 Canadian households back in 1915. Of course, this tart is asContinue reading

I made mincemeat from scratch last night. And again this morning. What took me so long? I mean to do it every year, and I’m pretty sure I haven’t managed to for at least a decade. (I’d remember. And I won’t make that mistake again.) I adore mincemeat, applied liberally by spoon or by tart. And yes, it likely has a lot to do with the season during which they’re eaten – I can’t think of another food so exclusive to Christmas as the mince tart – but what’s not to love about a dark jammy mix of dried fruit, citrus, apples and spices? And of course most things are their best selves when they’ve been homemade vs. mass-produced. I started with grated apples and chopped pears, along with raisins (two kinds) and currants, the zest and juice of a lemon and orange, some brown sugar and spices. Nevermind the suet – I used a bit of butter instead, which when you think about itContinue reading 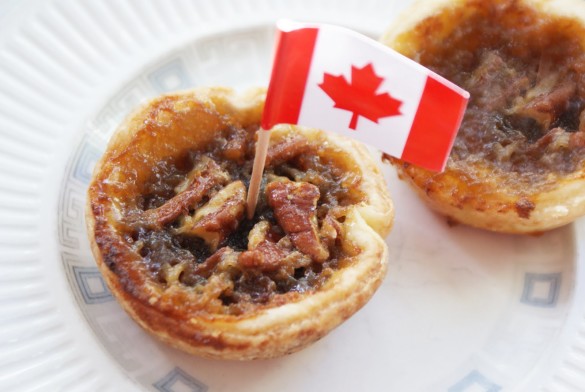 I’ve been a bit of a total blubbering mess today. I was a wreck from the time the alarm went off at 6 (to make empanadas, dontcha know), having been up well after midnight watching Naheed Nenshi (whom I went to Junior High school with) win the mayoral race. Sniff. But wait, it gets better. A couple hours later I got to bring afterparty treats for the citizenship ceremony at the CBC building, which welcomed 40 new Canadians of all ages from 16 different countries. There were mounties and families and kids dressed up with shiny patent shoes waving Canadian flags, but the bagpipes undid me. I think I was the cryingest person in the room. So – what to make for such an occasion? I decided on maple walnut white chocolate chunk cookies, date squares, Nanaimo bars, maple syrup tarts and my Grandma’s butter tarts – you can’t get much more Canadian than that, can you?