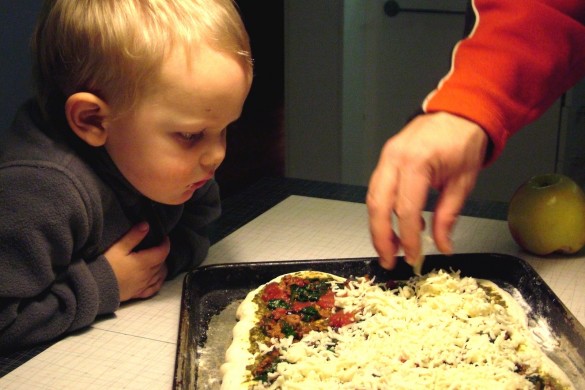 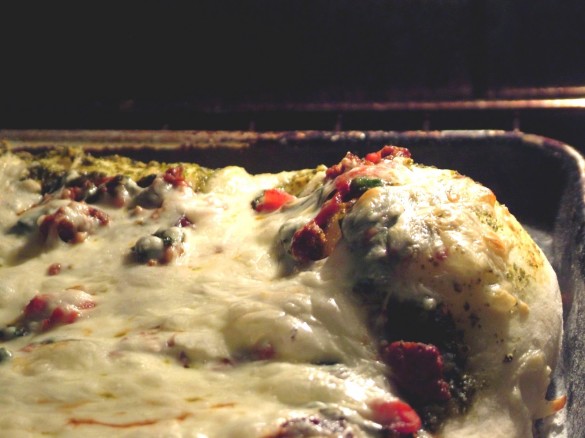 It’s becoming evident that trends are going to start appearing on this site – like everyone else in the world, there are the usual standbys we pull into service on a regular basis. Pizza is one of them, usually made with our standard whole wheat crust recipe. Which has always worked out just fine. But tonight, I got home from Edmonton at dinnertime with two batches of the no-knead bread dough bubbling away in their bowls, and thought, why not slap some onto a baking sheet and see how it works for pizza? I’m glad I did – the result was a chewy, bulbous crust like the ones you get at the Italian Supermarket on Saturday afternoons (minus the smoky charred bits they get from the wood-fired oven. When I win the lottery, I’m having one installed in my back yard. Seriously – the Canadian rep for Italian Magnaini wood-fired ovens is in Black Diamond!)

Fridge-cleaning pizzas always seem to end up better than any others, because you use up things you wouldn’t necessarily plan on combining: it appeared at first that we were out of luck in the sauce department, but then located half a jar of pesto (one of W’s favorites, despite the fact that it’s green – the kid will eat falafels and pesto but won’t touch apple juice or potatoes), which we spread over the crust. It took about a minute to cook a Spolumbo’s chicken sausage, adding the second half of a can of diced tomatoes and the last of a bag of baby spinach to the pan to let it wilt after the sausage cooked. On top, part-skim mozzarella.

Now, I’m assuming that anyone reading this has heard of the no-knead bread phenomenon – if not, you must. I’ll tell you right now that this is probably the most worthwhile recipe you’ll collect from this site. (If you go to only one movie this year, bake this bread recipe.) It was written about by Mark Bittman in the New York Times a year ago November, and it turned out to be the most emailed story in the history of the Times. Every food blogger in the known universe has tried it, and documented it. It’s absolutely fantastic. The original recipe says 12-18 hours, but I usually leave mine for 24, or however long it is between stirring it up and when I want to bake it.

If you want to turn this into pizza dough, you don’t need to flour it and let it rest on the countertop; it should be fine just scraped out of the bowl onto the pan. Either way.