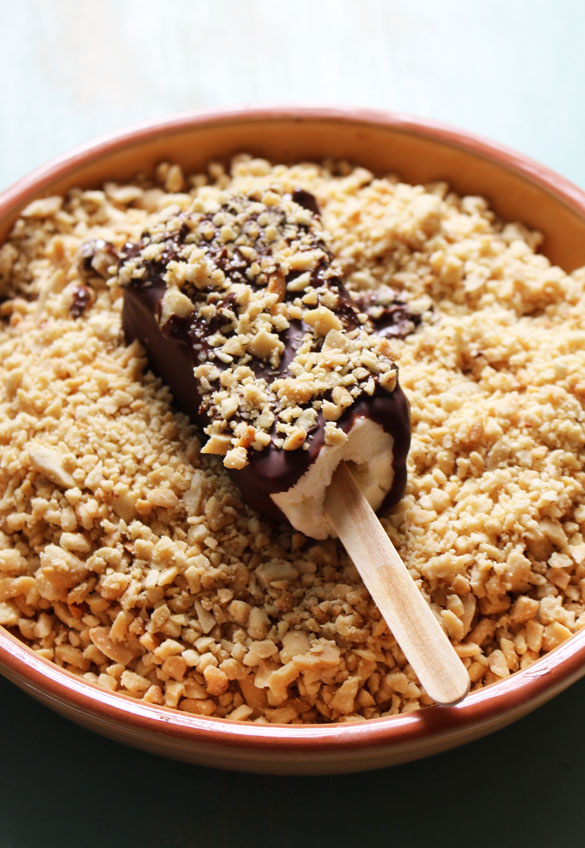 I thought I was prepared for summer, the end of school and the start of Stampede this year. I was not. I’m not even used to it being June yet, and it’s well into July. (I see a recurring theme here…) 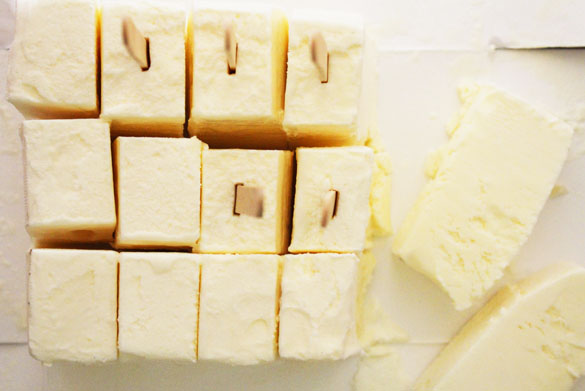 But. Priorities: I have figured out how to make those iconic midway treats I always picked as a kid, when my sisters would opt for cotton candy (mostly air) and candy apples (just a whole fruit, disguised with sticky red stuff – suckers!). The teenage summer staff would make Fiddlestix onsite in their box-sized concessions, opening up a box of vanilla ice cream, slicing it into bars, then dipping each piece into chocolate and rolling it in peanuts before handing it through the window in exchange for $2. I’m sure there’s a more mechanized, streamlined version out there now – but I still hold on to a scrap of nostalgia for ice cream that was sliced instead of scooped. 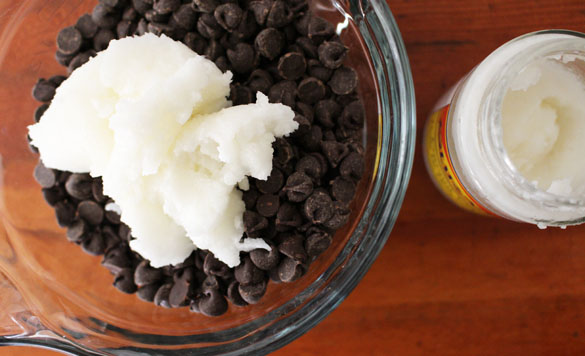 I came across a recipe for homemade Magic Shell – something I remember, but my mom never bought – and it occurred to me that such a thing could be used to dip bars of ice cream. Unlike plain melted chocolate, which is warm in its liquid state and will start to melt your ice cream on impact, magic shell is made with coconut oil, which keeps chocolate liquid even at room temperature and hardens almost instantly on contact with cold. It’s a very cool, delicious science experiment. 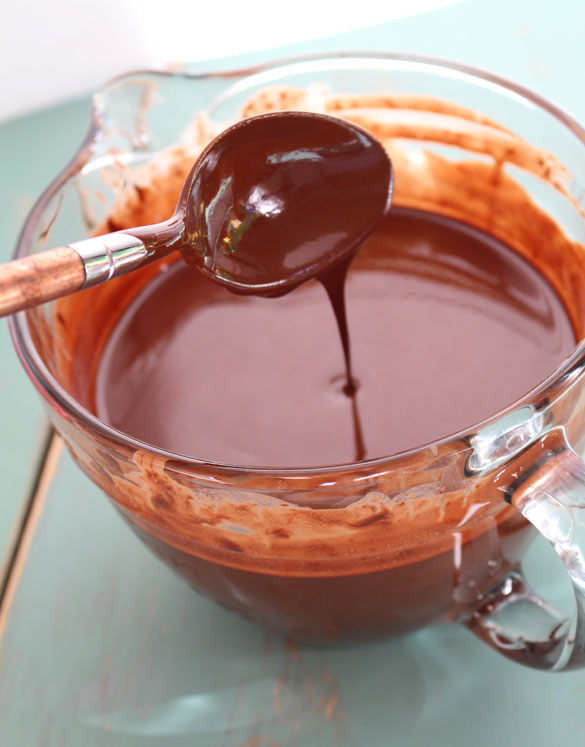 And it gives me an excuse to buy ice cream in a box. I opened mine up, sliced it into bars with a sharp knife, stuck in popsicle sticks and returned the open box to the freezer, top flap torn off, to firm up and wait until I was ready to dole out ice cream bars to a back yard full of friends. 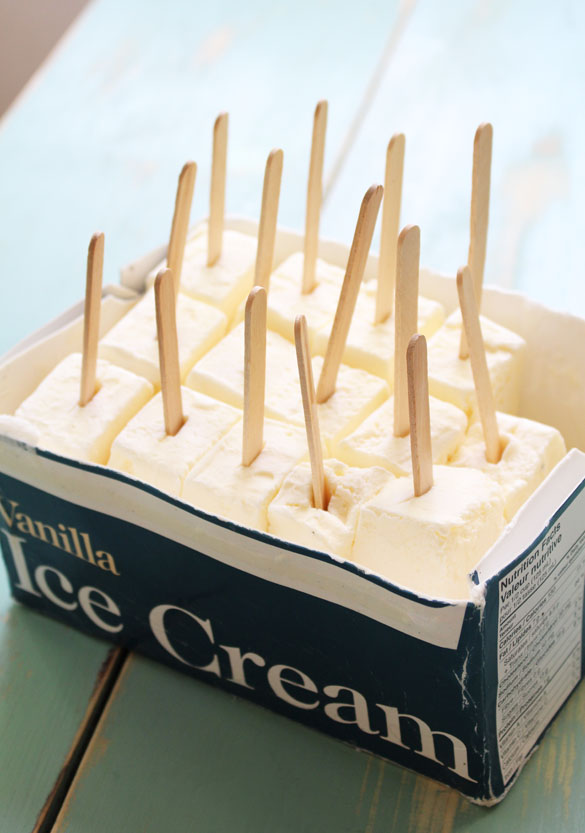 The basic principle is that the saturated fat in coconut oil (which conveniently has a flavour that enhances chocolate – it won’t make it taste coconutty) will turn hard and snappy upon impact with something cold. Most recipes call for dark chocolate and coconut oil in various ratios: Food 52 does two parts coconut oil to three parts chocolate. Instructables does one part oil to one and a half parts chocolate, by weight. Serious Eats adds a dose of corn syrup to replace some of the sweetness that gets lost when you dilute chocolate with coconut oil, and to create a slightly fudgy texture. Their formula is 250 g (1/2 pound) chocolate, 200 g (about one cup) coconut oil, and 125 g (a little more than half a cup) corn syrup. 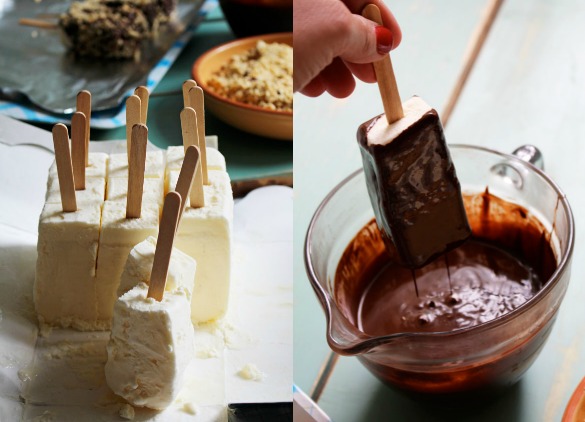 I read this wrong and did a pound of chocolate (in the form of chips – only because the store was out of big bars of dark chocolate) to 1 cup of coconut oil and a squirt (maybe 1/4 cup) of Roger’s Golden Syrup, which I use instead of corn syrup. Melted together in a glass bowl in the microwave, stirring every minute until melted and smooth. It worked beautifully as both magic shell on a scoop of ice cream and as a chocolate dip. So you can see that this is a very forgiving formula. 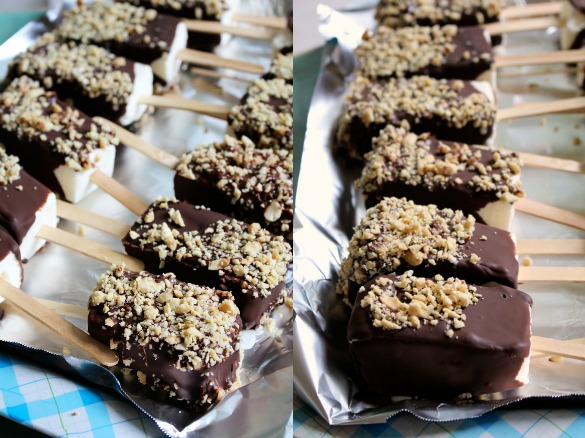 Let it cool to room temperature and it can sit on your countertop until you need it; once it hits ice cream, it takes about 20 seconds to harden into a substantial, solid shell. You’ll be able to tell when it goes from glossy to matte; if you’re dipping, let the excess drip off before sprinkling with or rolling in a shallow dish of finely chopped, salted peanuts. I imagine sprinkles would be a hit too – or nothing at all. You could set out dishes of small sweet or crunchy things – gummy bears, crushed Oreos and the like – and do ice cream bars made to order. I saw an older couple in line at the store the other day buying a box of cherry ice cream, which made me wonder why I stuck with plain old vanilla. (Although – there are few better combos than vanilla ice cream, thick slabs of chocolate and salty peanuts.) 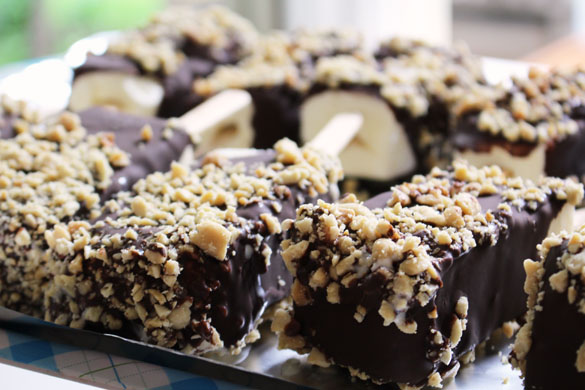 Whatever combination you choose (with a bowl of chocolate shell at the ready, it could be a new one every week – or every day), these will undoubtedly contribute to the thorough enjoyment of summer.