I take a lot of pictures on my phone. Right now there are approximately 4,375 on there (no exaggeration) and yet they’re not quite good enough to post here. And so I finally knocked one thing off my to-do list that has been hanging out there for at least a year (I have plenty of years-old to-do items, sadly) and got up to speed with my phone, which means I can finally (maybe) try to catch up on Instagram and not have to lug my regular camera around and then have to connect it to my computer to upload images.. so archaic! Look at me all cutting edge! So this post serves as a test, to see if the new toy is up to snuff. I did also want to share this soup. We had three turkey dinners this weekend – a tryptophan triple header. The first was at our house, with friends who have no family in town, which involved me making the stuffingContinue reading

The last hours of summer. Time yet for butternut squash soup? It can’t go without saying that the novelty of not having a kitchen has officially worn off. It’s no longer like camping, and I’m tired of having cold noodles swishing around my feet when I have a shower. (On account of doing our dishes in the bathtub.) No longer nestled in the protective bosom of summer, when people expect you to be at the beach and not answering your email, I wake up early every morning in a full-on panic that it’s September! It’s mid-September! It’s almost late September! and then kick my coffee consumption into overdrive, thinking that caffeine levels somehow incrementally translate to productivity. This of course is not the case, and by mid-afternoon I generally come to the realization that I’ve had approximately a litre of coffee and half a muffin, and dive into a pizza for dinner, swearing tomorrow I’ll do better.

Working for the weekend is never as fun as when the Expo is in town. For the past few years I’ve been charged with keeping the celebrities and their agents well fed in the gold room – the past 4 days have been a bit of a crazy fun no sleep cooking marathon, but getting to hang out and chat with Danny Glover (who – have I mentioned? – kissed me), Bill Paxton, John Ratzenburger, Matt Smith and the like made it totally worth chopping eight thousand bunches of kale (for this salad, which C-3PO loved!) and peeling about as many sweet potatoes for pots of soup I’ll tell you about soon. But there was another soup – ham and split pea was requested by Barry Bostwick – ironically, I think I’ve posted twice about the Expo, and both times it was pea soup by request. Previously by Tia Carrere. (If I were to guess what a popular food request from big LA movie starsContinue reading

When I was a kid, I wanted to be a cookbook writer. No lie. I know I’ve told this story before, of how I learned to read with a stack of cookbooks, and have had a few (or more) beside my bed ever since. And how my heroes were Elizabeth Baird and Lucy Waverman and Rose Murray and Jean Paré – all of whom were Canadian home cooks bringing good food to the masses, pre-Food Network and interwebs. Times have changed… recipes are rarely clipped out of the newspaper anymore, but more of us (so many!) are writing and sharing them. They’re emailed/pinned/liked rather than written on cards to pass along, which is perfectly okay, but I admit I’m a little nostalgic about it. What’s the future of cookbooks? When Elizabeth Baird wrote her first back in 1974, 6 cookbooks were published that year. SIX. These days there are so many, and they’re all beautiful. I can’t keep up. And here I am working onContinue reading

This cold has grabbed me by the collar and slammed me up against the wall. And yes, I’m resorting to chicken soup, spiked heavily with lime. Which comes in very handy considering how much stock I currently have in my freezer. In December I shot fifty soups for the next Soup Sisters cookbook, due out this fall via Appetite by Random House. Teams of other volunteers were rounded up to cook as I styled and shot, but while most of the excess was delivered to shelters, the short days meant a loss of light and many containers came home with me to be photographed in my kitchen. As you can imagine there was plenty of leftover soup hanging around my fridge. This one stood out – it’s simple and tasty – just chicken, onions and broth, no noodles to interrupt by slurplily splattering all over your chin, necessitating extra Kleenex. But really what I love is the crumbled feta and sliced avocado combined with theContinue reading 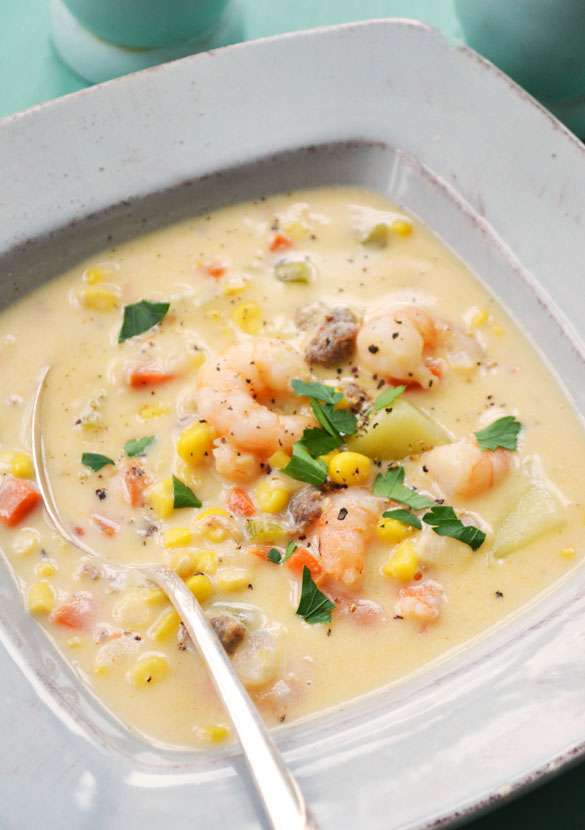 We chatted about chowder on CBC this morning – mostly because they wanted to play the chowder bit from the Simpsons (it’s the little things…), but also because it’s delicious, especially on a blizzardy day like this one. I’m a bit of a chowder purist – I like the creamy ones with corn and potatoes and bacon or sausage – and this time I added some BC wild spot prawns. (If you think a shrimp is a shrimp, give these a try. And they’re sustainable.) If they still have their shells on, save them and cover with water, then bring to a simmer and voila – a free batch of shrimp stock. Look at those shells! A mild or spicy Italian sausage (chorizo would be delish too) seasons the entire pot – I didn’t need to add garlic or herbs or anything but a bit of salt and pepper at the end. I made this in the dark early this morning, so I don’t haveContinue reading

I can’t sleep. And now I can’t see, because I’ve gone and plucked my contacts out, and my glasses are so old and scratched and bent that they hardly count anymore. I can’t move my head without them falling off, and ordering new ones seems to slip down my list of priorities as fast as my glasses slide down my nose, so if I decide to read or type anything after making that final commitment to blind myself at bedtime, I do so with my face an inch and a half from the screen. Which leaves me with a neckache, which doesn’t help with the not sleeping. I blamed afternoon iced lattes for awhile, and a large snoring dog who’s starting to smell more strongly of river, and pre-dawn wakeups (kids can’t fall sleep when they’re overtired, right?) and now I’m wondering if this is just the way it’s going to be from now on. I went downstairs and ate a bowl of Cheerios, evenContinue reading

I have an odd confession to make: I’ve never eaten buttered crackers before. Peanut buttered, yes – my mom used to sandwich saltines with peanut butter, and some of my clearest childhood memories are of squeezing them together so that it oozed out the holes on top, and that the all-natural just-peanuts butter my parents bought never squirted out as smoothly as the Skippy of my dreams. So why did I start, after hearing sad tales of friends downing entire sleeves of crackers with cold butter on the couch in front of the PVR? Do I need another buttery carb in my life? No… but I do like to know what I’m missing out on. So I utilized some of my stash of unsalted butter – which I like for eating, not necessarily for baking – and a sleeve of salted crackers, and got to nibbling. And so I tweeted about my snacky new find, and someone tweeted back: don’t stack them in the bottomContinue reading

On this day in 2011, I saved a recipe for African tomato and peanut soup with chickpeas, and it has been among the 400 or so others in my drafts folder ever since. This morning, I saved another recipe for African peanut soup with chickpeas. Cycles, anyone? I think I may be becoming predictable – requiring thick, spicy soup in early January as a physical and psychological ballast against the chocolate high that was December. I like that this is hearty and creamy without being cream-of-mushroom-soup-y; peanut butter enriches it and the sweet potatoes, which have been cooked to the point of falling apart, easily melt with the push of a spoon, making a thick base for the chickpeas to hang about in. It could be done on the stovetop, but I tend to overuse my slow cooker when it’s out, rather than clean it properly and put it away. I’m lazy like that – peeling and chopping multiple veggies is somehow easier than washingContinue reading