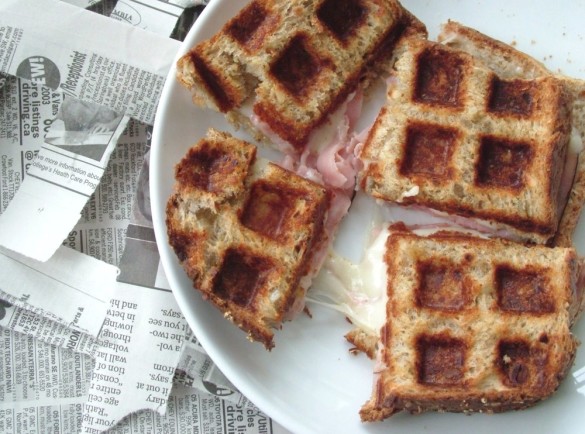 Having discovered that Willem has eaten his way through about a third of two apples and three pears, and I don’t really want to finish them all (again) I needed to find a way to use them before they compost themselves right there in the fruit bowl, on the dresser and on the edge of the bathtub. Often I chop or grate them into oatmeal or muesli (muesli: oats, dried fruit, nuts, flax and some grated apple stirred into vanilla or plain yogurt with honey, left overnight to soak itself up) but this time we were outnumbered, so since we (miraculously) have a bit of Breyer’s Light vanilla ice cream in the freezer, I made a crisp.

There is no need to measure ingredients for a crisp. Chop, without peeling, as many apples and pears as you’d like to use, and put them in a baking dish. (There is no need to peel them – why would you, when so much of the fiber and nutrients live in their skins? I mean, you don’t peel them before eating them out of hand. Besides, cooking softens them anyway.) Toss with as much white or brown sugar as you like (not too much – according to your taste and the sweetness of the fruit), a sprinkle of cinnamon and if you like, a squeeze of lemon juice.

For the crumble: 1 cup whole wheat flour, 1/2 cup oats, a handful of whole toasted almonds in their skins (I usually have these around to nibble on), 1/4 cup brown sugar and 1/4 cup butter, or thereabouts. There are thousands of formulas for crumble mixtures, with oats and/or nuts and without, so really you can use whatever ratio you like, blending until the mixture holds together when you squeeze it in your hand. Pulse it in a food processor or mix with a fork until well combined and crumbly. (Obviously if you use a fork, you’ll then need to use sliced almonds, or none at all.) The other great thing about crumble mixtures is that it takes exactly as much effort to make a large batch as it does to make a small batch, so use what you like and keep the rest in a freezer bag in the freezer to scatter over muffins and other impromptu fruit crisps.

Sprinkle over the fruit and bake at 350F for 30-40 minutes, or until golden on top and the fruit is soft. Between the pears, which are particularly high in fiber for a fruit, the whole wheat flour (you can’t tell the difference with a crumble topping – it works perfectly in place of all-purpose flour), oats and nuts, this is a reasonably high-fiber dessert. A handful of raspberries or cranberries would have been nice thrown in with the pears, or a grating of orange or lemon zest. I can’t wait to have the remains cold for breakfast with a glop of vanilla yogurt.

So dinner was backwards; the crisp was so enticing coming warm from the oven that we ate some right away, and then some antipasto that ended up prematurely thawed because I thought it was Chicken Pesto Stew, and then it seemed silly to put much effort into a full dinner, so I quickly waffled some ham & Swiss cheese sandwiches on grainy bread. What are waffled sandwiches? The same as grilled cheese, but you do them in your waffle maker, which acts sort of like a panini grill, cooking them on both sides while creating cool waffle grooves. If you like, you can put a teeny dab of ketchup into each divot. Kids think this is very cool.