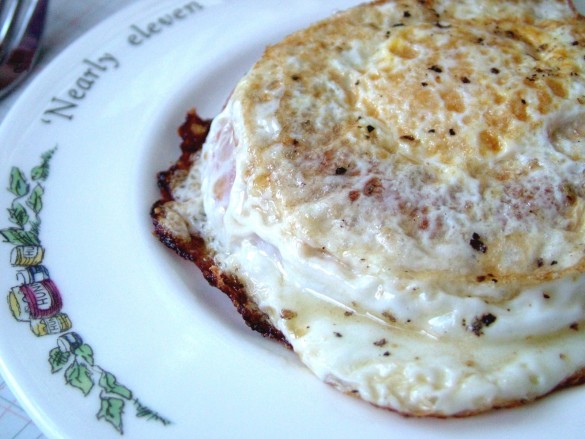 We played hard today. Awake at 6:30, we organized the basement (or disorganized it in an attempt to begin organizing), cleaned out a couple church sales (which contributed to the already dire basement situation), made peanut butter puffed wheat squares for my niece’s yard sale and lemonade stand, played in big buckets of water, jumped on the trampoline, had pizza and drank lemonade squeezed fresh to order using an antique juicer my sister picked up somewhere. It was the best lemonade stand in Calgary, with its pyramid of fresh lemons, sugar and pitcher of ice water, handmade signs, chocolate cupcakes and puffed wheat squares. I wish I had my camera.

Afterward, W slept right through dinnertime, woke up at 7 and still refused to get out of bed. I doctored up the leftover fusilli from last night, baking it with cheese to bring him up to share in bed. He had a meltdown that it wasn’t eggs and toast, so after briefly trying to explain that I wasn’t running a restaurant (it seems he doesn’t quite grasp the concept of eating out yet) I finally relented and made bageleggs.

We grew up with bageleggs. My mom started making them in Toronto, where there were bagel shops on every block. When we moved to Calgary in the late 70s, there was not a bagel to be had. My Toronto dentist had told me if I ate a bagel a day I would never need braces, and for awhile I thought this stupid new city where everyone wore cowboy hats and didn’t have swimming pools at school or know what a bagel was would force me into a headgear for a big chunk of my precious elementary school life. Then we found Bagels & Buns on 17th Avenue. You make a bagelegg by slicing a bagel in half and putting it cut side down into some butter and oil in a hot skillet (a bit of both to keep the butter from burning, and because butter is delicious and oil is good for you) and breaking an egg into the middle. (Sometimes, when you get one of those bagels with hardly any hole, you need to tear it open a little.) Baste the top as it cooks, or flip it over easy; my method of choice. I haven’t had a bagelegg in years, and forgot how much I love them. The bottom gets all crunchy, and the sides of the bagel hole protect the yolk from breaking until you want it to.

(Of course I ate my way through half a pan of puffed wheat squares before we even got to the bageleggs.)

Day 125: Pistachios on the porch, then Chocolate Chip Cookies