Kind of a weird dinner tonight, despite my (meagre) efforts to make something relatively nice for Mike’s homecoming. It ended up an hour long battle over W not wanting to eat anything but the meat.

For some reason there was a 2-pack of farmer’s sausage in the freezer, so I t 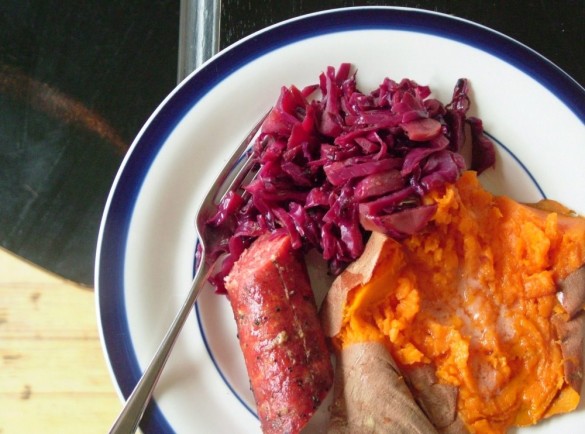 ook it out to thaw. I wasn’t really that familiar with farmers’ sausage, a smoky, garlicky pork sausage that needed cooking (unlike something along the lines of kielbasa). The package exclaimed “perfect for the BBQ!” so I threw one on the grill.

Mike is Ukranian. You wouldn’t know it except for the fact that his dad was #12 out of 14 kids born on a farm in Cudworth, Saskatchewan and hates cabbage rolls because he lived on them growing up. I didn’t even get the benefit of marrying into a family that makes killer peroghies using a secret family recipe. He was not forced into shumka lessons as a kid, either. My point is, sausage and cabbage are pretty Ukranian, so I intended to make something of that ilk, but then discovered that the red cabbage in my fridge was going south faster than the green cabbage, and thought I had better use it while the opportunity was there.

My Belgian grandma used to make braised red cabbage with apples, so that’s what I did. I have never been able to make it as good as my friend Sue, who is one of the best cooks I know, if not the best, and I know a lot of chefs. She sent me her recipe, but not until after I made mine (I got too frivolous with the vinegar, and it ended up too sour.)

The Braised Red Cabbage & Apples I Made

1. Preheat the oven to 325 degrees F.
2. Cut the cabbage into thin slices and set aside.
3. Melt the butter in a large (5 litre/quart or so) heavy saucepan with lid or dutch oven over medium heat. Add the cherries and cook for about 2 minutes or so.
4. Add the rest of the ingredients and cook over low heat until warmed throughout, then add the lid and pop it in the oven for about an hour or so, stirring a couple of times. The cabbage will be cooked through, and the liquid thickened a bit. Taste and add a little more honey and/or vinegar as you like to suit your taste (or apple juice if it needs a bit more liquid).

Note from Sue: I usually make this a day or two ahead of Thanksgiving and Christmas, as it tastes even better after keeping in the fridge awhile. Many a time I make lots at Thanksgiving and freeze the rest for Christmas. The liquid keeps it all happy in the freezer for ages.

And because sausage and cabbage doesn’t quite make a meal, I rounded it out with a roasted sweet potato (done in the Easy Bake oven, so as to not heat up the whole house), split and dabbed with butter and drizzled with a bit of maple syrup. The long, thin ones are easiest for roasting. Or baking – same thing – why is it roast turkey but baked ham?

Day 125: Pistachios on the porch, then Chocolate Chip Cookies