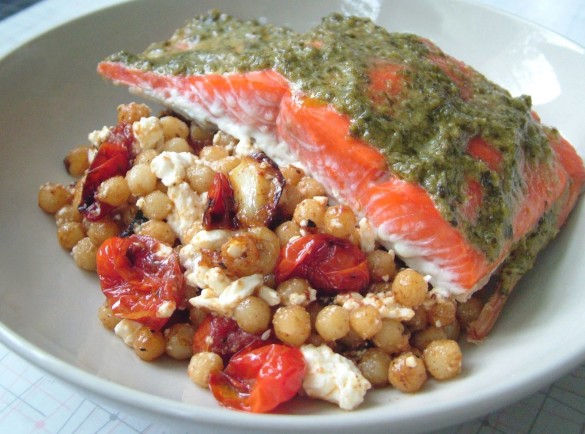 Today, I wanted to demonstrate (to myself as much as anyone else) that dinner in under 15 minutes does not have to involve take-out or be previously frozen. (Not that there’s anything wrong with that. Well, sometimes there is.)

We stopped at the grocery store on the way home from a long meeting with our accountant. Tired, with our heads full of numbers and our car in the shop, I was determined to not give in to the lull of the rain and the security of my baggy sweater and pick up fast food – something perfectly excusable on a day when you find out your car, taxes and dental work are going to cost more than a trip for two to Europe.

So I picked up some fresh wild salmon (I’ve never understood why frozen battered fish sticks were considered convenience food, when they take 25 minutes to cook, and a fresh fillet of salmon takes only 10) and when we got home, I told Mike to time me. I turned the oven on to 425F, put the kettle on, slapped the salmon on a cookie sheet and spread each piece with a spoonful of pesto (sorry for the recurring ingredient, but I know W will eat pesto salmon). Then I rummaged through the fridge and found almost a full pint of wrinkly grape tomatoes, so cranked up the heat under my cast iron skillet and glugged in some olive oil, then dumped in the lot of them. (Had I been in less of a hurry, I might have spread them on a cookie sheet and roasted them, then pulled out the sheet, put the salmon on it and returned it to the oven for 10 minutes.) The kettle whistled. My plan was to pour boiling water over plain old couscous, which takes under 10 minutes to morph from dried to edible, but discovered that someone (most likely me) had poured cornmeal into the couscous jar. Damn. So I think the timing stopped at that point as I did some damage control and put a pot of water on instead, thinking I could do up some sort of simple/rustic Italian pasta tossed with olive oil, garlic and tomatoes (this is the way Giada does it, right? and she’s a goddess). When it came to boil, I remembered the package of Israeli couscous I found at Bite in Inglewood on the weekend – big, slippery, pearl-shaped nuggets of pasta that just might work out. I’ve never made Israeli couscous before, but it was easy – you cook it just like pasta, but for a bit longer. The salmon went in and out of the oven (10 minutes per inch of thickness) as it boiled, and when it was finished the tomatoes were soft and starting to blacken. I threw in a few squished cloves of garlic for a minute or two, along with the teeniest pinch of dried red pepper flakes, then drained the couscous and dumped it in and tossed it about to coat it with the garlicky oil and nudge the browned bits from the bottom of the pan. It looked fantastic as is, to be honest, but when I remembered that there was feta in the fridge, I had to crumble some of it in. If you don’t have Israeli couscous in your cupboard, and I don’t expect you to, this would work equally well with ordinary couscous, or orzo, or probably any shaped pasta. 5 comments on “Day 143: Pesto Salmon and Israeli Couscous with Tomatoes, Garlic and Feta”