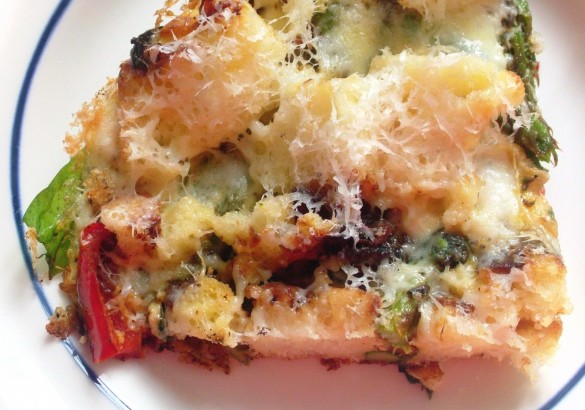 I was in the middle of feeling guilty about making another fridge-cleaning frittata (it’s the best way I know of to use up desperate vegetables and bits of cheese) when I was inspired by the last two wedges of caramelized onion pan bread, which I sent to the wading pool with M and W and which later came back in a knapsack full of wet towels.

It occurred to me that I could cube or crumble it into the pan of asparagus, red peppers and spinach I had just finished sauteeing, before pouring over the beaten egg. At first it seemed weird, but then it occurred to me that it would turn it into a sort of strata, the soft sconelike bread instantly sopping up the egg without needing an overnight soak like regular strata does.

If you have no idea what I’m talking about, strata is an egg casserole wherein you pour eggs beaten with milk over stale cubed bread and any combo of meat, veg and/or cheese, and refrigerate it overnight so that the bread absorbs much of the egg, then you bake it. In this case I cooked up my veg, then spread over the diced bread, poured over 2 eggs and 3 egg whites, beaten with a little milk, salt and pepper, and grated the very last teeny triangle of Parmesan over top.

So there you go. A meal in one dish, and I have once again demonstrated my frugality. Or at least my irritation at the thought of wasting perfectly good food.