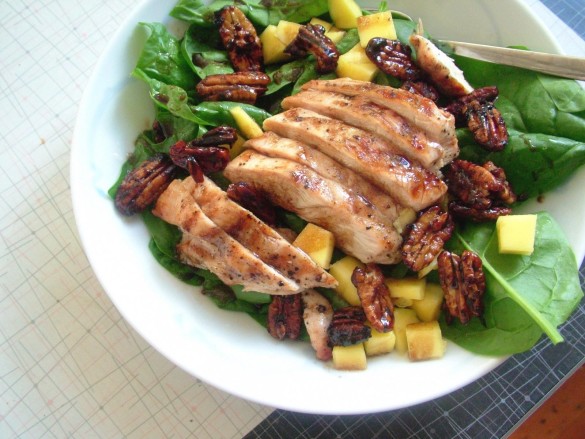 To start: Goat Cheese Gratin with Roasted Peppers, Tomatoes and Olives with some torn pita. Serendipitously I had to use up red peppers, chile peppers, goat cheese and olives. (OK, I cheated and bought some tomatoes.)While searching for new uses for my new found plethora of spinach, I stumbled upon this recipe for a salad with mangoes and candied pecans. Really it was just spinach, diced mango and pecans that had been caramelized in a skillet with 1/4 cup brown sugar, 1 Tbsp. oil and 1 Tbsp. balsamic vinegar. Please remember this: if you think pecans burn easily on the stovetop, pecans in bubbling sugar burn twice as fast. Don’t be as impatient as I am and end up with bitter burnt nuts. Do you know the street value of those things?

The pecans are fab, by the way, and would be great on any salad or as a snack, although next time I’ll omit the oil and just do them in brown sugar and balsamic; some chopped rosemary would be good, too. The oil doesn’t hurt, just makes them a little more slick than I think they need to be.

The salad was begging for something to make it more substantial, so I grilled some plain chicken breasts, brushed with oil and sprinkled with salt and pepper. (I would have added some lemon juice and zest and let it sit for a bit, but I had none.)

Ben and Emily and one of their cousins came over to watch the fireworks, and so to keep them awake until 11:30 they baked brownies and chocolate chip bars – the fastest route from zero to chocolate chip cookies. It also makes a great cookie card, baked in a round pan and decorated with icing or melted chocolate chips squeezed out of the snipped-off corner of a ziplock bag. (Seal a handful of chocolate chips in the baggie, sit in a bowl of warm water until melted, snip off the corner, and gently squeeze out.) In a medium bowl, stir together the butter and brown sugar. Add the egg and vanilla and stir until smooth. Add the flour, baking powder and salt and stir until almost combined; add the chocolate chips and stir just until blended.

Spread batter into an 8” x 8” pan that has been sprayed with nonstick spray; it will be fairly thin. Bake for 18-20 minutes, until pale golden around the edges. Do not overbake if you want them to be soft and chewy.

To make Chocolate Caramel Marshmallow Bars: Melt 20 caramels with 1 Tbsp. milk in a small saucepan or on medium power in the microwave until smooth. When the bars come out of the oven, drizzle with the caramel mixture and sprinkle evenly with 1 1/2 cups mini marshmallows. Return to the oven for 5–8 minutes, until marshmallows are slightly puffed and golden. Cool in the pan on a wire rack. Adds 1 g fat.

Day 189: White Beans with Tomatoes, Spinach and Pancetta (OK, it was bacon)