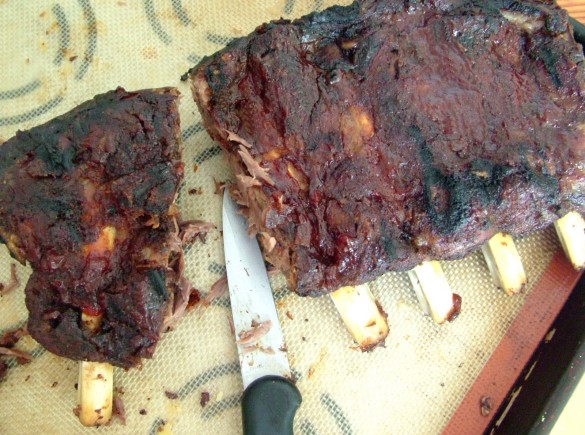 Who needs corn dogs when there’s this kind of meat on a stick?

The question of what to make Mike for his birthday dinners for the rest of his life has officially been answered.

I had an extra rack of Carmen Creek bison ribs I had rubbed down with dry rub at my cooking show at the Stampede this afternoon, but not cooked. After all, like beef or pork ribs they need a good couple hours of slow cooking to tenderize the meat and release it from the bone. So I brought them home and popped them in the oven at 275 F from 3:30 until 6, then pulled them out, painted them with barbecue sauce and threw them on the grill for a few minutes, just to finish them off and caramelize the outside goo. You could do the pre-cook in advance if you’re having a party – do them a day or two in advance, keep them in the fridge and then slap them on the grill for 20 minutes to heat them through when you’re ready for them.

For Lou, it was torture. He followed W around in the desperate hope that he would drop a molecule of meat, or that he might lower his hand full of Flinstone-sized rib so that he may sneak a lick. No such luck. W knows full well that he needs to walk around the house with his hand straight up over his head in the air if he’s carrying food, particularly meat or cheese. I hate to admit I was too tired to make a complete meal out of it – we walked around moaning over our mammoth bison ribs, and then ate a mango in a meager attempt to balance things out a bit. My only consolation is that bison is so much leaner than beef – half the fat of beef, and less fat even than skinless chicken or turkey, or even halibut. (I suspect this would not apply to bison ribs – all ribs tend to be fatty, but part of the appeal of bison ribs is that they tend to be meatier and less greasy than other types.) We didn’t actually eat ribs AND burgers, but I had the mixture left over from making meatballs at the Stampede too and so cooked it up as burgers for tomorrow’s lunch. As I’ve mentioned before, ground bison makes great burgers, and if you chop up some fresh or frozen blueberries and add them to the mix (in this case just a pound of ground bison, salt and pepper) you’ll sneak some extra nutrition into them while also adding moisture – it’s a good thing to do. It doesn’t work as well with stronger-tasting, sweeter, more acidic berries like raspberries or strawberries, but blueberries and saskatoons are just mellow enough to work. Pulse them quick in a food processor if you want them more finely ground – they blend right in to meatballs, meatloaf and burgers, or even when you’re cooking up some meat for spaghetti sauce or sloppy Joes. It’s getting easier to find, although bison is usually sold frozen in the large grocery chains – chubs of Carmen Creek bison (which is antibiotic and hormone free!) are at Safeway, Save-on, IGA, and Overweightea, and Sobey’s has fresh ground bison in the meat display case.

Day 192: Poached eggs on toast with sautéed mushrooms and spinach

5 comments on “Day 191: Bison Back Ribs and Blueberry Bison Burgers”