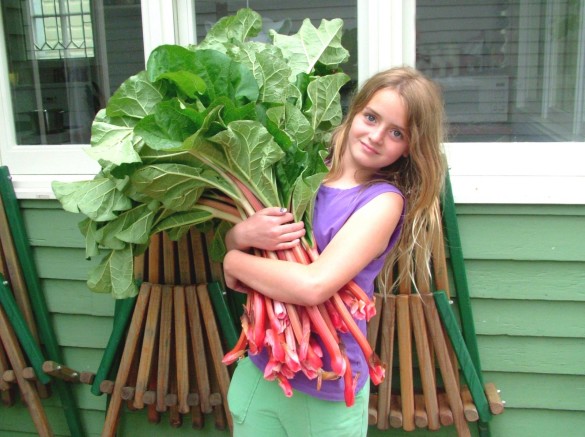 Something really needed to be done about all this rhubarb. (By the way, I figured out what was wrong with my spindly, pencil-thin rhubarb when I busted W and Lou peeing on it in tandem. I don’t think plants like that.)

But my sister had to cut her monster down in order to paint her house, and brought the bulk of it over. I also robbed my neighbors of some of theirs, and I think there’s still some in the freezer from last year. So I skimmed my cookbooks and magazines and made rhubarb orange jelly, bluebarb jam (blueberry-rhubarb, but I really used Saskatoons from the bush down the street – Saskbarb doesn’t have the same ring to it though) and rhubarb chutney to put away for Thanksgiving. As I also mentioned, I am cleaning out my basement. I thought this might also be a good time to clean out my cupboards (as my many shelves of dishes and kitchen things in the basement gets rearranged) and my spice rack, which never was properly organized in the first place. As a result, my kitchen has become a massive staging area for dishes, boxes of jars and other things I’m sorting, cleaning and reorganizing. Every millimetre of surface area is covered. And I had to make a birthday cake for W’s third birthday tomorrow, too. So when the subject of dinner came up, it was quickly decided that we’d reheat some chili from the freezer – part of my Stampede surplus. It was on the spicy side, so W had a poached egg on toast. Then we ate the last of the pumpkin cookies I made the other day during my pumpkin spree (we pawned a few off on neighbors), some spread with soft cream cheese on the bottom and sandwiched with another cookie. Usually I’m not a huge fan of cakelike cookies – I prefer more the dense, chewy, crispy-edged chocolate chip kind – but these are dense and heady with ginger and cinnamon and remind me of the best part of a muffin – the top. Top o’ the muffin to you!