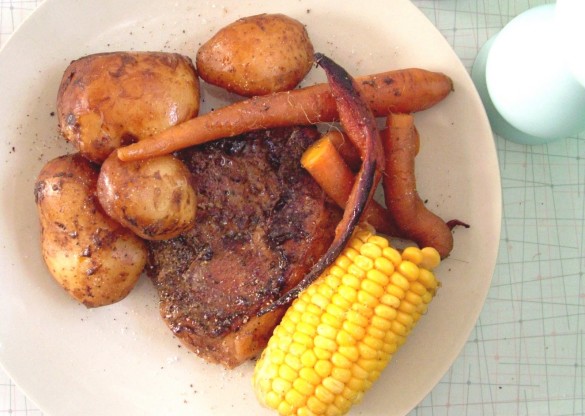 I’m not really a steak and potatoes gal. Which isn’t to say I don’t love steak or potatoes; I just don’t come to a meal by considering the meat first and then filling the space around it with the requisite starch and veg. As you may have noticed over the past 239 (!) days, I tend toward meals that combine all elements into one.

But I was perusing Stephanie’s blog – she is using her Crockpot every night for a year (a braver soul than I, I think) and came across a recipe for a layered dinner – the name of which shot me straight back to the 70s – where you tuck your steak, potato and corn in the crockpot and leave for 7 hours, and come back to them all cooked. And it worked, technically, although it all came out roughly the same shade of beige, and was a litte… utilitarian. This photo gives it a little more justice than it likely deserves. It may be plasphemous to a nice steak, but low-slow heat works wonders on a cheap one. I told Mike to pick some up and he grabbed eye of round, which turned out a little on the dry and stringy side. This would be a great way to do bison, I think. I browned it quickly first in a bit of oil in a hot pan, just to give it colour and flavour. Whether a recipe instructs to or not, I generally brown meat before I throw it in the slow cooker; it makes a huge difference, flavour-wise.

The corn was grimly overdone, particularly where it had come in contact with the edge of the bowl; there it was dark, dry and shriveled. If I ever do it again, and I don’t arrive home five minutes before we eat, I’ll throw the corn in only for the last hour. However. I noticed just now that I was supposed to wrap the corn in foil; I had seen the same instructions for the potatoes and didn’t bother – the smallish, nubbly potatoes I threw in turned out wonderfully soft – and must have skimmed over the part that told me to wrap the corn too. Oops. 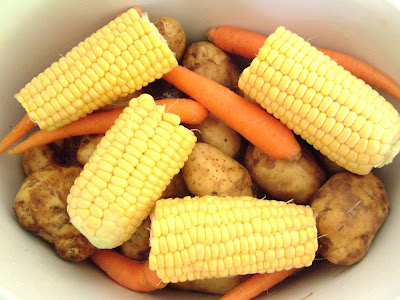 I also opted against the tequila, as tequila and I have not gotten along since the mid-90s, but did add a splash of stock and some Worcestershire sauce. So under these potatoes and veg, which I did nothing to besides wash and poke (the potatoes), are sitting on two steaks, over which I poured about 1/4 cup of chicken stock. I didn’t have onion flakes either, and was too lazy to slice a bit of onion into the mix. A few fresh garlic cloves would have gone well too. I cooked the lot on low heat for 8 hours, but probably could have gotten away with 6.

So today I’m Mary Tyler Moore, working all day in the newsroom and then coming home to a steak and potato dinner for my happy family.

I’m going to make it after all.