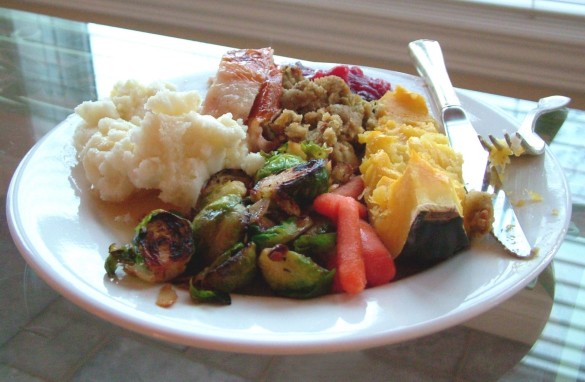 I didn’t think I ate too much until I went and listed it. No wonder I’ve managed to fill out even my PJ pants. As usual, I ate too many warm, puffy-white Pillsbury Crescent Rolls (this is the only night we have them) between oven and table before I even started on dinner. (As I was rolling them up, I snuck a chunk of my Dad’s 70% cocoa Lindt chocolate into the middle of one I then arranged crookedly in one corner of the cookie sheet so I could distinguish it from the others. Kind of a lowbrow chocolate croissant.)

Everyone contributed something: I did the soup (threw all the ingredients, including two leeks the size of baseball bats, in the slow cooker last night and left it, then pureed with a hand-held immersion blender right in the pot), cranberry-rhubarb sauce and dessert, and nothing was that elaborate, really; even the squash was just thrown in the microwave and the baby carrots quickly steamed and drizzled with honey. My sister cut simmered Brussels sprouts in half and browned them with some sliced almonds, and my mom did the turkey and plain old bread, onion and sage (the very best kind) stuffing. 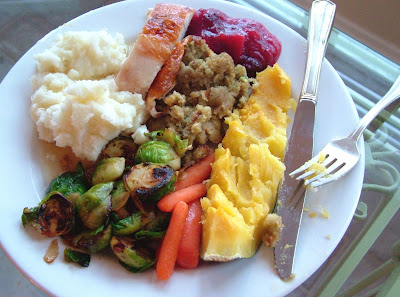 I had to make the requisite pumpkin pie, but also made another browned butter bliss: apple this time, as it’s the season for them, and I didn’t have the gumption today (after teaching a hands-on risotto class) to make pumpkin and apple pie. To make the bliss I sliced unpeeled Jonagold apples straight into a baking dish, stirred up the butter-sugar-egg-flour batter, spread it over the apples and baked it until it was bubbly; the result was fantastic rewarmed in my Mom’s oven while we ate dinner and served with softened vanilla ice cream. Next I must try it with pears. Or maybe pears and fresh cranberries.