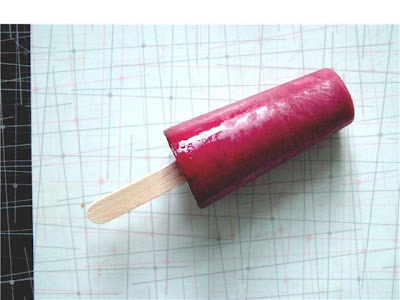 Not a happy gut today. Overfed and underslept. I’m sure this is the very first second of November in my lifetime during which I ate not one Halloween candy. Believe me, there are plenty here; Mike took this as proof positive that I was unwell. My midsection retaliated all day (and still is) for, I imagine, the past few weeks of abuse.

I ate two apples and an orange today – all I could imagine eating, probably because they are cool and watery and acidic and typically make me feel hungry. At dinnertime I pulled out a container of yam and lentil soup (it has been in there longer than I thought) and Mike made W a grilled cheese sandwich. Mike ate all the soup; I had a black currant popsicle – just black currant puree and vanilla yogurt frozen in a popsicle mold with a wooden stick (I hate those plastic ones that go with the mold – they just spend all their time scattered on the basement floor being stepped on).

And sorry, I went and forgot to post my recipe for bacon brittle, in case anyone is interested. I made it last week for Halloween on CBC. It was made using my Grandma’s peanut brittle recipe. Instead of the peanuts, I cooked up about 6-8 slices of bacon until crisp, drained them and chopped them roughly, then stirred the chunks in instead of the peanuts. I also ground fresh black pepper over the surface as soon as I spread it out on the baking sheet, while it was still hot and tacky.