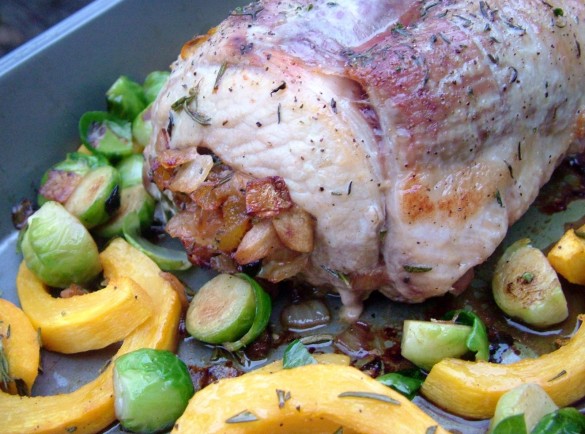 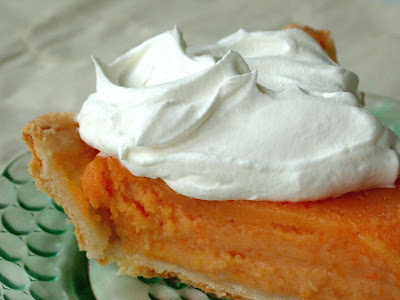 Typing it out it all sounds very fancy but it really wasn’t a big deal. Dinner really seems so insignificant a thing at this hour. I am so relieved for the world.

A White House theme was my intention this morning as I pulled a pork loin out of the freezer; I wanted to use my 1913 copy of The White House Cookbook today – something I picked up for under a dollar at a garage sale a few years back. It seemed as appropriate a day as any to break it open and actually use it. I love old cookbooks. Their comforting old book smell, the way recipes are presented, without pretension (and largely without measurements or pan sizes or oven temperatures) with descriptions like “butter the size of an egg” (something I read on my Grandma’s own recipe cards) and “butter with nicety” (in reference to greasing up your waffle iron). It contains menus for Mrs. Cleveland’s wedding lunch and General Grant’s birthday dinner; seating charts and etiquitte tips and how to clean marble busts and fix squeaky doors. I figured it must contain some sort of instruction for a pork loin. It did, but whole pig seemed the more popular option, unless you feel like cooking up some snipe on toast. (Which, by the way, cooks in the same manner as woodcock, but more quickly.)

So I bailed on that idea. I made Newport Waffles this morning, anyway. And a sweet potato pie. So that takes care of the White House portion of the menu this evening. 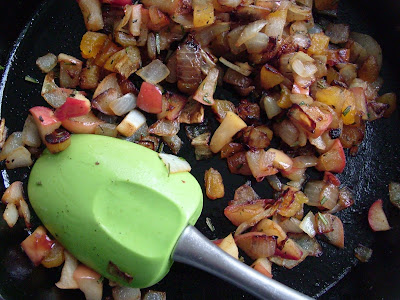 Instead, I sauteed a small chopped onion and a small chopped apple in a good drizzle of olive oil, added a few chopped dried apricots and the leaves of two stems of fresh rosemary. I intended to add bread to make stuffing, but realized it was enough to stand alone. Rather than slice and open the pork loin like a book, I impaled it with a long chef’s knife horizontally through the middle and tucked all the pan goodness in. (In retrospect, there was no real need to untie it…) 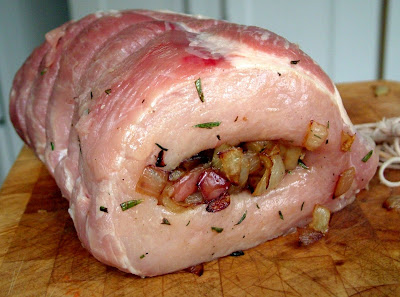 Rubbed it down with a little oil and sprinkled with salt and pepper and crumbled thyme, and slid it into a 350F oven. Then I pulled out the small Christmas squash I bought at the market awhile ago and forgot about, sliced it and cut the rind off, tossed with a little more oil and chopped rosemary, and scattered it around the roast. 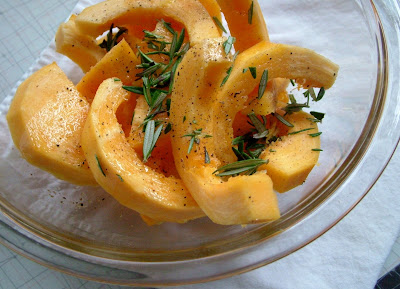 On Sunday we leave for Jasper for a week; I’m one of the presenters at the Christmas in November event at the Jasper Park Lodge. (Don’t panic, I won’t stop posting! I may have to procure recipes from some of the hotel chefs though.) My point is, I’m in fridge-cleaning mode in preparation for leaving in four days. So I dug out a bag of Brussels sprouts, trimmed them into the same bowl I did the squash in, and gave them a quick boil to get started and then added them to the roasting pan too. When the pork reached 150 degrees (meat thermometers are so handy for this), the veg were done and there were plenty of dark, crispy, gummy bits on the bottom of the pan to scrape over the pork. Really it was a one pan meal – I didn’t even bother with potatoes or rice or any form of starch.

(As I sit here typing I’m watching what is apparently a drunk political analyst of sorts on the BBC berating his interviewers for asking him questions about something he thinks they think he knows nothing about. But he does. And… he’s off the air.)

This was a good and simple pie, albeit rich. It’s alarmingly orange when you’re used to a more rust-coloured pumpkin pie. I resisted the urge to add cinnamon and simply grated in some nutmeg as per the recommendation, and am glad to have followed direction – nutmeg is almost always added along with cinnamon, allspice and cloves, and rarely given the opportunity to stand on its own. And – two cups of sugar seemed like a lot. I used a cup and a half, assuming that their non-standardized teacups were closer to 3/4 cup than a full cup. I actually liked this, which is a lot coming from a notorious pumpkin pie-hater.