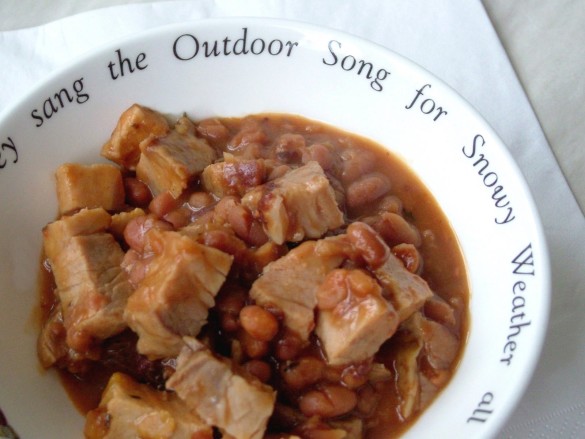 I’m on a bit of a bean bender.

One of my favourite ways to recycle roast pork is to chop it up and stir it into brown beans. Especially if said pork comes accessorized with some sort of apple, which gets stirred in right along with it.

I was about to open a can or thaw some slow cooker baked beans when I remembered the half a box of beans left over from a foodstyling gig I had a couple weeks ago. (To be honest I firstremembered the box last night, during my pasta fazool. Instead of the usual can of beans I added a pouch of these Mediterranean beans with sun dried tomatoes and black olives – ingredients: black eyed peas, onions, black olives, sun dried tomatoes, garlic, extra virgin olive oil, tomato paste, sea salt, oregano, spice – and it was phenomenal, but seemed like an obscure item to call for in the recipe.)

The beans are a brand (Canton) I had never seen before, but with which I am impressed, and no one is paying me to say that. (I kind of wish they were, since I’m saying it anyway.) It’s a great idea – to doctor up a can of beans before they go into the can – and then instead of putting them into a can, package them in an easily torn-open stand-up pack of the sort I imagine they use in space, which would be so easy to keep in the car or throw in your bag to bring to work for lunch. There are five varieties (I hear the best is their Indian chick peas with onions and ginger – hello – have we met?) and two are brown bean varieties – one with sun dried tomatoes and the other with molasses and raisins. I chose the latter, thinking it would go well with the apples and apricots, and containing raisins, might be passable as oatmeal to W. 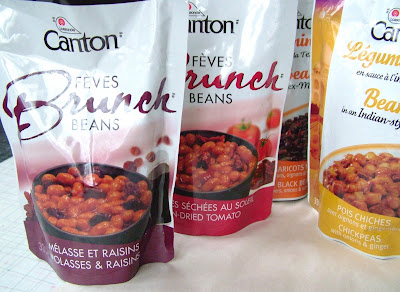 There is only one variety – the Lima beans with pesto and red peppers – that I dismissed, thinking I’d pawn them off on my Dad or bring them to the food bank. But wouldn’t you know it – flipping past Orangette she just happened to have just written on the subject of Lima beans. I still would have clicked past – I just don’t do lima beans – but Molly is such a good and persuasive writer she made me want Lima beans, and I neverwant Lima beans.

It was Lima beans in cream, or, sorry – Lima. Beans. In. Cream. – which triggered the realization that I do, in fact, have a bit of cream in the fridge to use up before we go, and I wondered if a drizzle into a warmed package might magically transform them into something not so Lima bean-y. It was wonderful; the beans buttery and smooth; the sauce something that should drape over pasta or be enough of to make soup. I ate mine and half of Mike’s before delivering it to him. So now I’m three for three with these packages.

I am, as you know, a fan of the bean. I love finding new products that make proper use of them, especially when they have the potential to be easily turned into so many other things. I know what’s for lunch tomorrow.