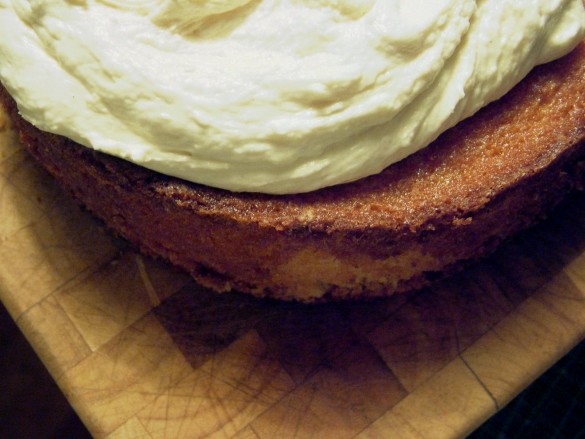 (Sorry for the crappy photo, but it was almost midnight…)

I completely forgot that I joined the Daring Bakers earlier this year, which required me to complete one baking challenge per month. Previous months were fun, but with all those birthdays and Halloween, I completely forgot October. I remembered my membership obligations last night at around midnight – just in time to check in and learn that post day is today. Phew. (Besides not wanting to miss another month – having baked last nights penne tonight, I wouldn’t otherwise have had much interesting to tell you about.)

In a nutshell – the Daring Bakers is a conglomerate of over a thousand bakers (worldwide) who take turns choosing a recipe for the lot of us to bake, which we all post on our blogs on the same day in order to compare notes. It’s actually quite fascinating to see what other people come up with using the exact same recipe. Sometimes we are given freedom of expression, sometimes we must adhere exactly to the recipe as written. It reminds me of an article in Gourmet magazine years ago, in which they gave 20 chefs, food writers and other professionals the same recipe for an angel food cake, and then took photos of the final results. Each one looked different.

The recipes we are challenged to bake typically require separate recipes to be made first in order to complete the mother recipe, and this is no exception. You have to make a dark amber caramel syrup to add to the cake and frosting, but let me tell you, it’s something tasty. It has the intense flavour of almost-burnt sugar, and I imagine it would go swimmingly on waffles. (Not that I have anything against maple syrup, you know, but just for a change. And how much does 2 cups of sugar cost compared to 2 cups of maple syrup? If youre looking to save money, don’t go for the cheap Aunt Jemima…) My fingers are still sticky from dipping them in my Pyrex measuring cupful of syrup all night.

As usual, my two cents:

– When making the caramel, make sure you dissolve the sugar completely before bringing it to a boil – if it’s sandy (that is, undissolved) it will be more prone to crystallization. Also, I wouldn’t cook it quite to the point where it’s smoking – at this point it burns almost instantly, and you don’t want your caramel burnt. Cook it until it’s the colour of teak. Dark amber. Unless you like things burnt.

– The batter will break (look curdled) when you add the milk – this is OK. It works itself out with the last addition of flour.

– My cake needed an extra 20 minutes of oven time, so over an hour total. And it was still very dense and just ever so almost underbaked (but deliciously so). I imagine this quantity of batter would bake up just fine in two 8″ or 9″ round cake pans. There is certainly enough icing for two layers.

– I daresay this is the best icing I’ve had. (I may change my mind with the next cupcake, but for now, I have decided that is my stand.) My concern is that adding vanilla might interfere – or at least compete – with the browned butter and burnt sugar (caramel) flavour. Also, I didn’t bother with the cream, but added syrup until it was the texture I was after. Very sweet, but very good.

– This is a crumby cake (not at all crumbly, but the sides will give you plenty of flies in your ointment). You might want to try a crumb coat – spread a thin layer of frosting over the surface of the entire cake, caring not at all about crumbs. Freeze until the frosting at least is solid (it doesn’t have to freeze all the way through) and then spread with another layer of frosting, the crumbs having been effectively trapped like Han Solo in carbonite.

Re: Caramels: I don’t recall ever seeing a recipe call for precisely 3/8 teaspoon of salt. But who am I to argue with Alice?