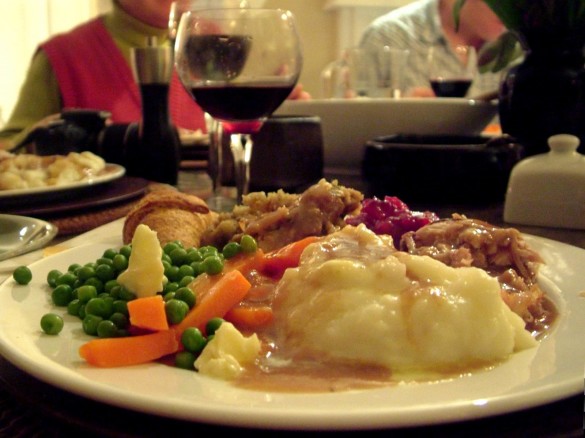 A fantastic Christmas, if not a little chaotic, as Christmas should be. Morning at my sister’s with the family (including, between us, 5 boys 5 and under), noon to mid-afternoon at ma-in-law’s, then home to drop off Lou and make the trifle before heading back over to my parents’ house for dinner. Turkey, stuffing, mashed potatoes, gravy, carrots, peas, cranberries, green salad with candied pecans. Fudge. Butter tarts. Post-modern fruitcake from The New Yorker (meh). Mince tarts made with puff pastry and phyllo from Jamie Oliver’s Christmas special (both courtesy of A & R). Chocolate bundt cake from B. Red wine.

Although I did taste each dessert (in the name of research, you understand, and mostly picked at between 4 and 7 as we worked in the kitchen) I tried to save myself for the fruitcake trifle. As you may remember, my fruitcake did not survive re-entry, and so I crumbled a lot of it into an old trifle dish I wish had belonged to my Grandma but really my Mom bought me at a restaurant going-out-of-business sale, doused the cake chunks with a glug of sherry and topped it with two apples and two pears that had been peeled and sauteed in butter with a sprinkling of sugar and cinnamon, then a batch of custard made with Bird’s Custard Powder, and topped the lot with whipped cream. 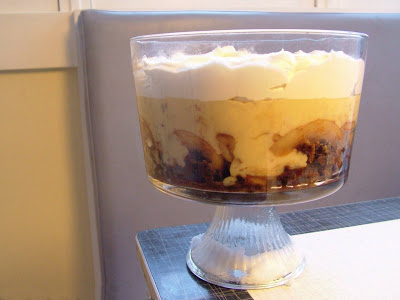 Ladies and gentleman, we have a winner. My Mom, who grew up with aunts who made trifle, said it was the best she had ever tasted. The now-moist dark fruitcake reminded her of her aunt Noreen’s plum pudding, which was always served with custard and whipped cream. I love plum pudding, but never do seem to get around to making it; I worry no one will go for it with the same enthusiasm I have, leaving me to polish it off myself. Don’t think I won’t do it.

Mike was equally enthusiastic (although without the accompanying nostlgia) and I have officially answered the question of what to have for Christmas dinner – fruitcake on its own is too much, I’ve already eaten too much chocolate, and I want something topped with whipped cream. This satisfies all my festive needs.

Tomorrow my goal is to get dressed and leave the house only to go tobogganning (and maybe get coffee on the way) with the new sled Santa brought. That will be the sum of my efforts. And, of course, come up with dinner.

Here’s hoping your Christmas was just as happy.