A particularly harrowing day today, one that should have ended with a glass (or bottle) of wine. Or Scotch. Or both. At the same time. Out of a paper bag through a straw. But these days I am loath to drink my calories, unless it’s in the form of a Peter’s milkshake I would have to nurse all day long in lieu of meals, considering its 900(ish) calorie price tag. 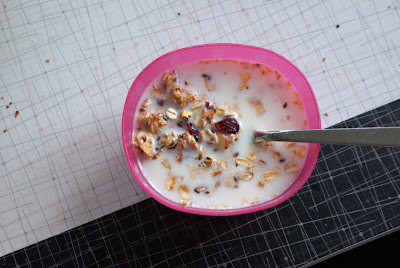 W ate a bowl of granola at around 5 and then asked for eggs and toast. I obliged, cooked three and put our poached eggs over spring greens and roasted asparagus, with the last of the Oka cheese (the rest went with those Raincoast Crisps, which I feel I’ve eaten my body weight in) and a roasted orange pepper cut into strips. All drizzled with maple-balsamic vinaigrette, which I’d eat on anything. (One New Year’s Eve when I was pregnant I drank a wineglass of balsamic straight-up and it didn’t seem weird at all. Luckily I drank the last of the bottle on my first go, or I’d have no teeth left.)

Still plodding along on this weight loss regime. It has, as it always does, gotten easier. It’s less of a concerted effort and becoming more habit now. I have had to consciously ignore that inner voice that tends to get louder at around 10 pounds in and play the ‘you’re in control of this’ card – hey, you deserve to go get yourself a milkshake! You’ve lost what, fifteen pounds? Sixteen? You deserve this! You’re totally in control now – you can go ahead and order that pizza. You’re so on the ball.

I’m sitting at about 203 now, not much of a change in the past week, but the scale hasn’t been going up again either. I am feeling much better for it. More streamlined and better able to move through my life. Or I was, until I had to spend the past two days trying on clothes in front of two (very nice) stylists charged with picking my wardrobe for the show. (Or more accurately, one: charged with, other: friend along for the trip.) Bright colours, no stripes, no short sleeves on account of my flabby, scarred, stretch-marked and fishbelly-white upper arms. The hours-long parade of three-way full-length mirrors under fluorescent lights and scrutiny deflated me a little. Or maybe a lot.

But. I didn’t drown my sorrows in anything edible. (Nor, unfortunately, drinkable.) The half jar of Nutella is still sitting untouched on my shelf. I did not say f*ck this, I’m still wearing size 18s here and have three tiers of back rolls which Spanx really only even out into rolling waves, and the camera adds ten pounds and there are three cameras on me, and I’m going to be immortalized on film and broadcast to the world like this, not wanting to turn sideways lest people notice my barrel chest or aforementioned back fat, nor my protruding right thigh that’s a full two inches (I measured) bigger around than my left thigh, and maybe I should just go ahead and be the fat chef, because it’s a lot tastier that way. And easier. (But is it, really? Probably not.)

My brain actually knew better this time than to move in on me while my defenses were down. I’m finally starting to get that it won’t make me feel better to dive headfirst into a box of Chicken on the Way (who makes the very best fries, by the way, dipped in mayo, and corn fritters dunked in honey). I mean it would make me feel bloody fantastic for about 20 minutes, but immediately plunge me into a place I had no desire to go.

So I had my Big Salad (because I needed some greens and I love big salads with lots of stuff in it, not because I’ll just have a salad) and one square of dark chocolate and dug in my heels as strongly as I ever have before. I went and made a pot of tea even though I didn’t really want tea, and had good snotty cry because it does wash away some of the worry, and reminded myself that this really is a hard thing to do. It doesn’t help to live in a world in which Kate Winslet is considered big. Honestly.

Can I, before I get on to the business of Free Stuff, suggest an analogy? One I could only introduce in such a sapped-out state? There is a valuable lesson in the Wizard of Oz. Dorothy learns after monumental efforts to find her way to see the wizard, whom she believes to have All Answers, seeking direction from whomever she comes across, that she must look inside herself to find the way home and that the ability to do so has been with her all along. Of course it was. But it wasn’t until she knew this that she was able to access what she needed to get where she wanted to go. So what if Glinda came along and told you the same – that you can put your faith in people and promises and things, and spend your life searching for the right answer, which might always be changing, but ultimately it’s all up to you and you already have the answer? And although you might not know it you do already possess exactly what you need to bring you home?

If you knew you could do it, would that make a difference?

No, I didn’t dig into that Scotch. Maybe I should.

54 comments on “Big Salad with Roasted Asparagus, Oka and a Poached Egg”