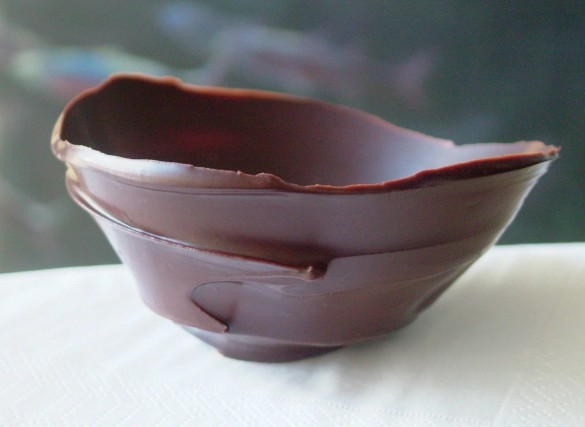 I wanted to offer up something sweet for Valentine’s Day. Although I realize as I type this it’s technically too late to get any actual V-Day use out of this idea; no matter. Any day can be made better by anything served up in a chocolate bowl.

Chocolate bowls are dead easy to make. (And if you want to make a bunch of little girls ecstatically happy at a birthday party, let them all make their own, and then use them as vehicles for ice cream sundaes.) All you do is this: melt chocolate. Preferably dark or semi-sweet, which isn’t as soft as some milk and all white chocolates; chocolate chips work just fine. Do this gently; in a double boiler or bit by bit in the microwave.

Let it cool ever so slightly; you want it to be melty but not so hot that it will melt the rubber. Blow up as many balloons as you want bowls. Don’t blow them up huge, or you will have salad-bowl-sized chocolate bowls (unless this is what you’re going for). Also, barely blown-up balloons are thicker than those blown to capacity.

Dip them into the chocolate, then set on a piece of waxed paper or foil (they will stand perfectly upright, creating a nice flat base all by themselves) and leave them be until the chocolate cools and sets. That’s it. If you want to be fancy about it, swirl some white chocolate (not a lot) into the dark before dipping, or if you rock the balloon back and forth in multiple directions (it’s hard to describe this; you’ll know what I mean when you do it) you end up with a chocolate tulip that you might pay big bucks for in a pastry shop.

I have, I warn you, had one explode – KABLAM! – as I proudly held it up to a cooking class of about 25, leaving a Julie-shaped chocolate outline on the back wall behind me. I then received a long and hilarious email from an attendee of said class, who had the same experience at home (after watching me do it – go figure) that resulted in her having to REPAINT HER CEILING.

So – proceed at your own risk. Although admittedly I haven’t had one explode before or since. We’ll see if one explodes on camera tomorrow. (Hopefully not – I don’t think fifty thousand dollar TV cameras like that much.)