I am LOVING how the Ericas spurred a blitz of comments on the subject of coffee – that is, what you like to have with it in terms of experiences – besides chocolate, cookies and scones (not that there’s anything wrong with that) – making me want to eat komish and yoyos with my grandma and sit in silence by the water and drive to the cabin in the cold pre-dawn. It’s lovely to read about those little things that make people happy, what is considered bliss, and how food plays a role in those moments.

Tonight was not nearly as inspiring. Awhile ago, I made pork won tons to stash in the freezer to drop into simmering chicken stock for instant won ton soup. (Or wor won ton with some bok choy, carrots, shrimp, noodles, scraps of leftover chicken or pork, etc.) And tonight I called them into service. 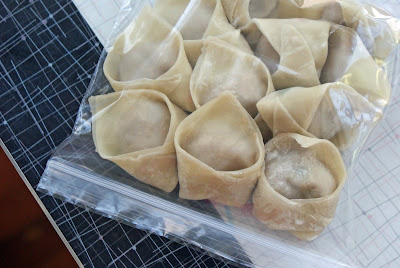 Mike loves Ichiban noodles. He doesn’t eat them often, but I did come home early once and bust him and W sharing a bowl, and I haven’t quite forgiven him for introducing them. I never make the stuff. But tonight, it was blizzarding outside, there was a minor flood down at the space where Mike’s band practices (the jam pad, if you will) underneath the Crossroads Market, so he was down there hauling out gear and I had a meeting to go to and couldn’t find any of my notes, and so I just heated a pot of water, threw in some frozen won tons, when they rose to the surface I threw in the noodles, the packet of spicy chicken powder and a couple mini bok choy, separated at the base. It’ll do. W just got the noodles and won tons.

Wontons are easy. Buy some wonton wrappers, thaw them, and a pound of ground pork. Add to the pork any or all of the following: a tablespoon or so of soy sauce, a few chopped green onions, a spoonful of grated ginger, a clove or two of crushed garlic, a drizzle of sesame oil. Put a small spoonful of the mixture on the middle of a wonton, dip your finger into some water and run it along two (connected) sides, then fold it over like a triangle and press to seal it, pressing out any air bubbles so that it doesn’t become a flotation device in the pot of soup. Now you could leave it like a triangle, or bring the two flappy ends together and attach with another dab of water. Freeze them on a cookie sheet (so that they don’t stick together) and then transfer to a freezer bag, and you can throw them frozen right into your pot of soup to cook. (They’re done when they rise to the surface – it should only take a few minutes.)

One Year Ago: Moroccan Braised Carrots, Squash and Chick Peas over Couscous